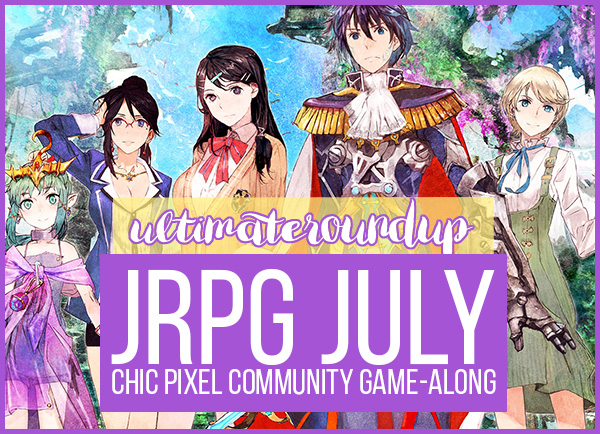 By far the most played game this month was Tokyo Mirage Sessions #FE, the highly anticipated JRPG for the Wii U that combines Fire Emblem and Shin Megami Tensei. @TheNesta wrote up impressions after completing the game on their Tumblr, and folks such as @Hailinel and @Daswhalebeard tweeted their thoughts as they played. It was great to see so many people share their thoughts on the same title!

A couple of games came out during JRPG July, as well – 7th Dragon III: Code VFD (loved seeing everyone sharing photos of their copies!), I Am Setsuna, and Star Ocean V: Integrity and Faithlessness all saw lots of tweets, let’s plays, and reviews. @MiaAruna says she wouldn’t have noticed 7th Dragon if it weren’t for all the chatter, but thanks to Twitter she now wants to check it out! It’s always great to hear that people were exposed to titles they might not have played otherwise thanks to a game-along!

Oh, but there were plenty of folks playing older titles, too. @BClarkOMP tried Drakengard and wrote up his impressions, and it’s a great read if you’re like me and never actually got around to playing the game! Meanwhile, the folks at the Geek to Geek podcast talked at length about the JRPG genre and discuss some of their old favorites.

Finally, I wanted to congratulate everyone who completed a game during JRPG July! This includes (but is not limited to) @RetroFighterG, who finished Ys Seven, @yukiruyume, who finished Zero no Kiseki (twice!), @WinterDisa, who finished Dragon Quest III, @stellarclass, who finished Tales of Vesperia, @verdelishJP, who finished Fire Emblem Fates: Revelation, @OmegaLiquidX, who platinumed Hyperdimension Neptunia Re;Birth 1, and @kittokatsutsu, who platinumed Odin Sphere Leifthdrasier.

Regardless of whether or not you finished a game for JRPG July or only had time to put a couple hours into a title, thanks for participating! It was another great year, and I can’t wait for JRPG July 2017 to roll around again in 12 months time. If this was your first Community Game-Along, do consider joining us in playing PlatinumGames titles for August, or check out the full calendar to see what other themes are in store for the rest of the year. Happy gaming!