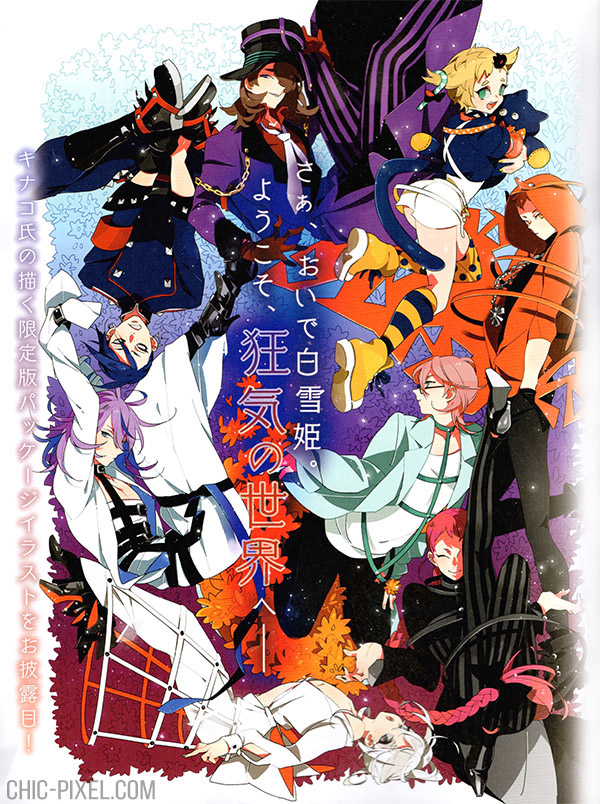 As promised back in September, the November issue of B’s Log brought some more information about the 2016 otome game Kyoukai no Shirayuki. Not only does it include character profiles for the last two bachelors, but it also showcases the mirror world outfits for each of the main characters, some short scenarios, and finally unveils the queen! Read on for scans and translations of the full article.

The first page of the article introduces the game, but also notably mentions pricing, which I don’t believe we’ve seen before. The standard physical version will be ¥6,804, while the download version is ¥6,264, and the limited edition will be priced at ¥8,964. I can’t wait to see what will be in the limited edition (you can bet I’ll be getting it)!

The Meeting at the Exhibit

At the bottom left corner of the page is a new background, a “mirrors of the world” exhibit where the protagonist (default name Akagami Mashiro) meets the eight men with whom her destiny is intertwined. Soon after, they meet again, and she is drawn into their world of madness…

Utsuzu Arima, VA: Ryota Ōsaka (19 years old) –  An other-worldly, beautiful young man who sells pomegranates. He has a feminine face and androgynous build. He has no interest in anything, and shows few emotions, positive or negative.

Director (Yuuri Koide)’s Comment: “The beautiful boy type. He’s a bishonen who is both cuter than your average girl and transient at the same time. He alone has a strange fantastic feel (and in his personality, too). His character point is the hair wrapped around his neck.”

Kinako’s Comment: “I made sure he had a mysterious feel. He’s completely white and androgynous, so you don’t quite understand him. After making him all white, I did my best to give him a cute face.”

Ousaki Maki, VA: Toshiyuki Morikawa (26 years old) – The curator of the museum in the protagonist’s hometown. He also works at an antique store as a hobby. A polite, well-mannered gentleman.

Director’s Comment: “A man with narrow eyes and braided hair. I think what he’s hiding (?) under that is even more interesting. When we were creating the characters, he’s the one I changed the least along the way. I definitely want you to keep an eye out for what’s crazy about him. His character point are his narrow, “senpaku” eyes (eyes where you can see the white below the iris).”

Kinako’s Comment:  “I made him explosively suspicious. His smile is scary, but the braid tied with a big black ribbon is a plus to his cuteness.” 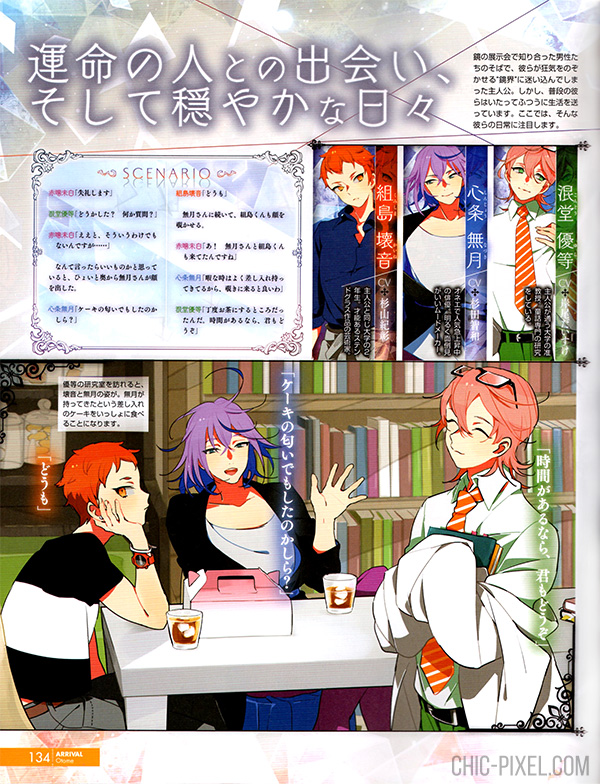 After the protagonist meets the eight male characters in their fated encounter, they live everyday lives when she is not stuck inside the mad Mirror World. The following two pages feature some example scenarios.

As you try to decide what to say, you notice Nazuki-san at the back of the office.

Mashiro Akagami: “Oh! I didn’t know Nazuki-san and Kaine-kun were here, too.”
Nazuki Shinjou: “When I’m free I often drop by with something. You should come visit from time to time.”
Yura Kondou: “We were just about to have tea. Do join us if you have a moment.” 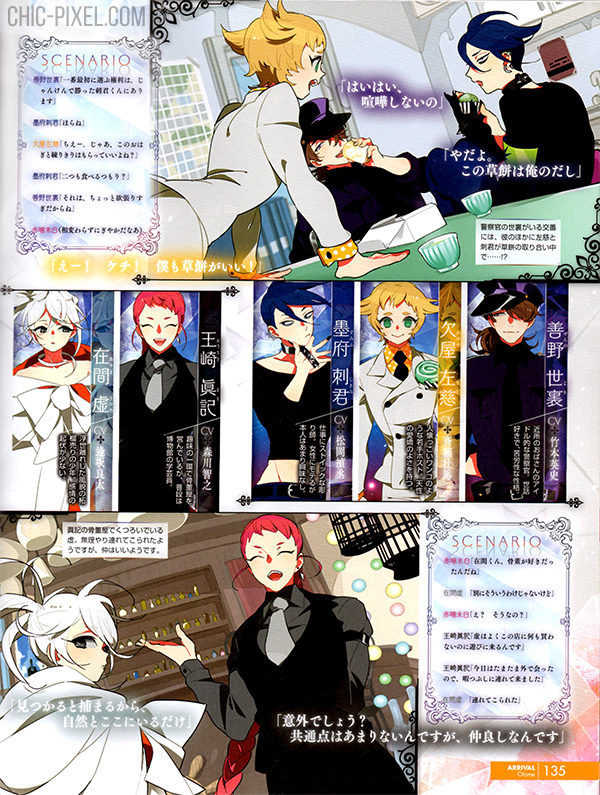 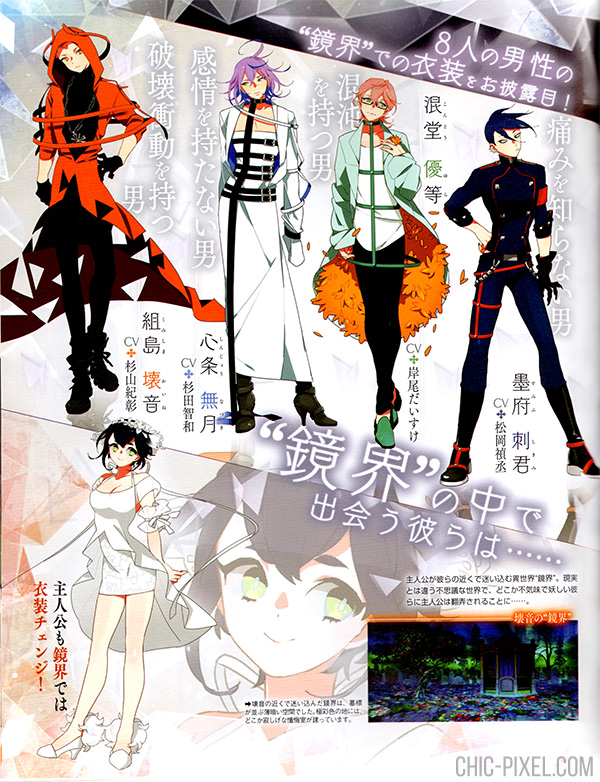 In the Mirror World, the protagonist and eight main male characters all get new outfits, which are showcased on a two-page spread. The area featured in the bottom right hand corner of this page is described as the “destructive sound” (kaion) Mirror World, where gravestones float in the darkness. There is a house of regret standing somewhere on the richly-colored earth. 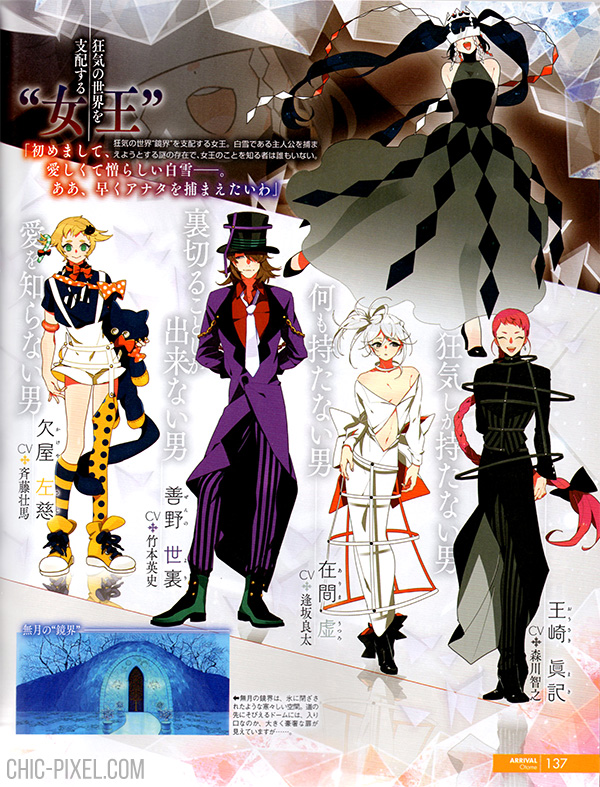 This is the first time we’ve seen the queen of the mirror world, who has been referred to in the promotional material before (pictured at the top right of this page). The text by her reads,” A queen who rules over the mad ‘Mirror World.’ A mysterious woman who is trying to capture the protagonist, who is Snow White. No one knows anything about her.”

In the bottom left hand corner is a shot of the moonless Mirror World, indicating that these may be shots of different mirror worlds, rather than separate areas in one singular space known as the Mirror World (perhaps each mirror from the exhibition has a separate world that reflects the “mad” side of each male character?). The moonless Mirror World is an icy, cold space, with a dome in the distance. There’s a door, but who knows what it’s for…

This concludes the Kyoukai no Shirayuki information in the November 2015 issue of B’s Log! I really enjoyed seeing the alternate costumes for all the characters, and getting a better idea of how they interact in the real world in the scenarios. Stay tuned for more updates as they’re unveiled! If you’d like to catch up on all of the information available so far, head to my translations of the announcement video and first B’s Log feature.