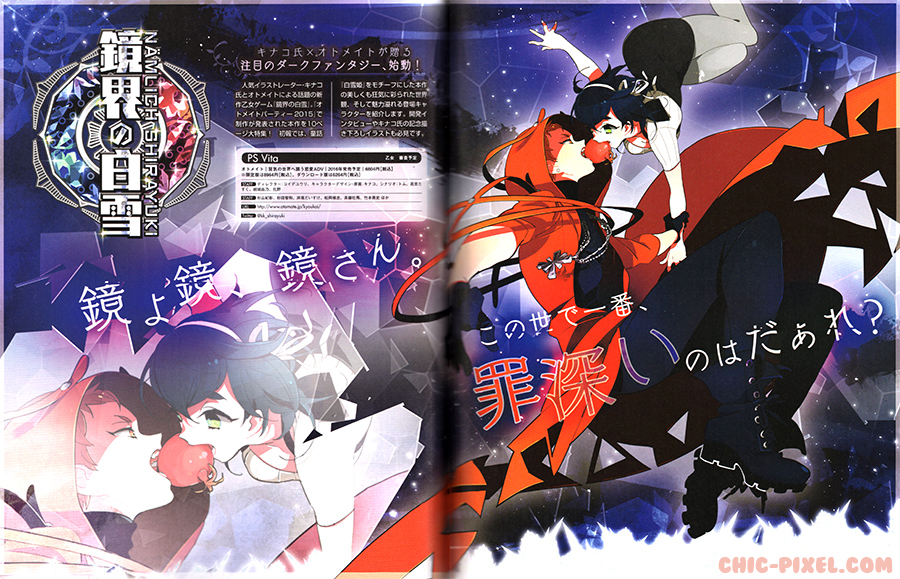 I’ve been beside myself waiting for new information on Kinako’s otome game, Kyoukai no Shirayuki, ever since it was announced last month. The dark fantasy otome game features Kinako’s striking illustrations and has an intriguing Snow White motif… coupled with a large number of prominently-displayed pomegranates. After a long month’s wait, new information on the characters and plot has been unveiled in the latest issue of B’s Log, which I’ll be going over in detail in this post. Let’s see what’s in store in the dark world of Kyoukai no Shirayuki…

(Before reading on, I recommend reading my translation of the announcement trailer if you haven’t already, as I won’t be repeating duplicate information.) 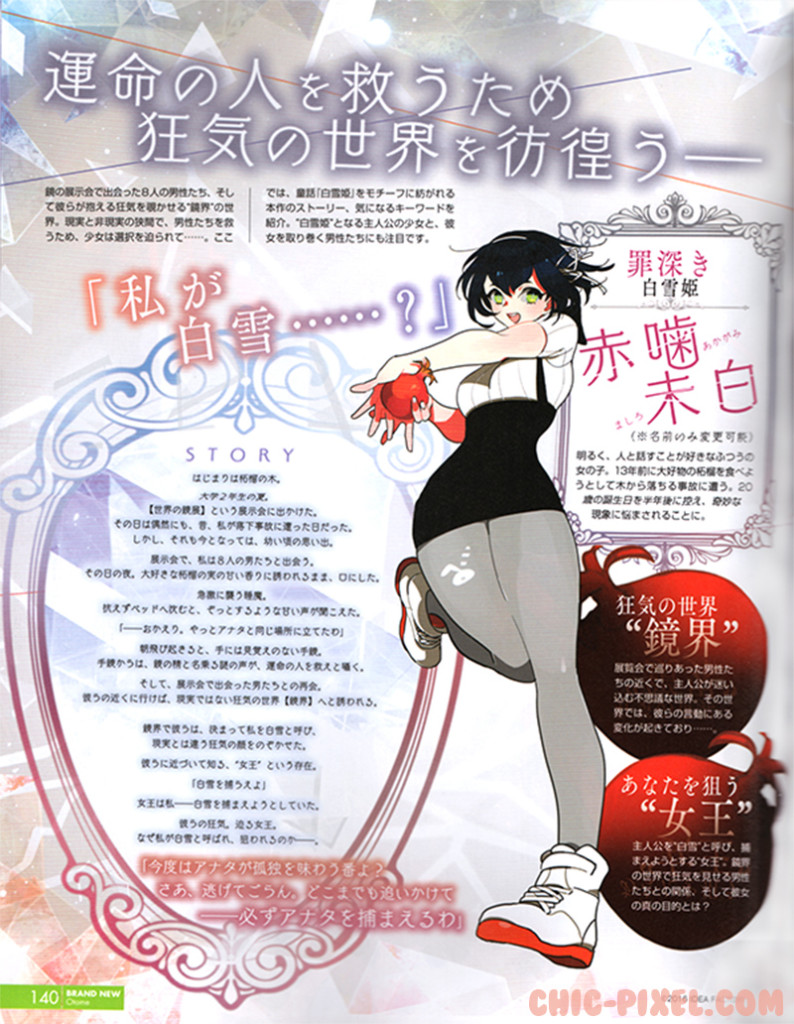 Mashiro Akagami (Name Changeable), “The Snow White with Deep Sins” (20 years old) – The protagonist, whose name literally means “snow white,” is an outgoing 20 year old in her second year of university that unfortunately fell out of a tree 13 years ago trying to get a pomegranate. One day, she meets eight men at a mirror exhibition. That night, she takes a bite of one of her beloved pomegranates, and suddenly falls asleep. A voice whispers, “Finally, we are in the same place.”

In the morning, Mashiro finds herself holding a hand mirror she’s never seen before. When she gazes in to it, she is transported to the mad world inside the mirror. There, she meets crazy versions of the eight men she met at the exhibit, who call her Snow White, and a woman known only as the queen. Why does everyone call her Snow White, and who is the mysterious queen?

Kaine Kumishima,VA: Noriaki Sugiyama (20 years old) – An art student who specializes in stained glass and second year at the same university as the protagonist. He’s cold until you get to know him, but deep down he’s very kind.

Director (Yuuri Koide)’s Comment: “In one word, he’s a tsundere. He doesn’t actively open himself up to others, so at first he looks uninterested. But, when he opens his heart, he’s the kind of guy who won’t hesitate to do things to make your heart skip a beat. His character point is his tsundere sideways glance.”

Kinako’s Comment: “I had a hard time deciding between giving him short floppy hair, or a super short cut, but in the end I went with super short. Since he’s a tsundere, I thought an expressionless face would suit him.”

Nazuki Shinjou,VA: Tomokazu Sugita (26 years old) – A hot new actor. A warm person who is good at uplifting and taking care of others. He normally appears as an onee (effeminate attire/mannerisms), but can expertly embody a masculine role depending on the part.

Yuuri Koide’s Comment: “An onee who gets people in a good mood. Originally he was just a handsome actor instead of an onee, but we decided to change him to an onee to give him more individuality. He’s normally more of a lady friend, but he enjoys occasionally joking around and looking more masculine. His character point is his great body.”

Kinako’s Comment: “His theme color is blue, so I made the underside of his hair blue. He’s got a lot of hair, so he’s hard to draw. I tried to make him give off that cool cuteness of an onee.”

Yuru Kondou,VA: Daisuke Kishio (26 years old) – An associate professor at the protagonist’s university who specializes in fairy tale research. Because he does things like serve tea to students who visit his office, he’s very popular.

Director’s Comment: “An kind older brother type who is very natural. He’s a fairy tale researcher exuding kindness and a master of indulgence. Always agreeable and frank, he is good at sympathizing with others. He’s usually smiling, but there’s a darkness growing within him. His character point is his moe lab coat sleeves.”

Kinako’s Comment: “I made him look kind, like his name. I used mild colors to give him a warm feel. His droopy lab coat produces a moe sleeve look.”

Shikimi Sumifu, VA: Yoshitsugu Matsuoka (22 years old) – A stoic tattoo artist. He’s a man of few words with a lazy and indifferent personality. Women naturally flock to him, but he doesn’t pay them any particular attention.

Director’s Comment: ” A cool, collected, and slightly wild kind of guy. He doesn’t talk much. He’s not somber, but rather remains stoic no matter the situation and dislikes unnecessarily explanations. Women tend to approach him, but he ignores their advances. His character point are his freckles.”

Kinako’s Comment: “It’s really difficult to draw him with a cool hair style. His under eye circles, freckles, and cold personality are all depicted on his face. He likes sharp objects, so I’ve included a lot of them in his design.”

Saji Kakeya,VA: Soma Saito (18 years old) – A host whose weak point is his dog-like friendliness. Because he’s so personable, he’s often doted on by women. Since physical contact is common at his job, he’s very close with others.

Director’s Comment: “A cute boy who uses his cleverness as a weapon. He’s used to being doted on, and his baby face helps him get his way. Since he spends a lot of time with women for his job, he may be the best at dealing with women. His character point is his mole by his left eye.”

Kinako’s Comment: “I tried to make him as cute as possible. Since he’s a host I gave him a crisp suit, but I sweetened it up with the candy and polka dot shirt. I made his hair look like animal ears.”

Yori Zenno, VA: Eiji Takemoto (30 years old) – A policeman who is something of an idol to the local moms. Since he’s always taking care of others, he’s constantly worrying. He actually loves cute things but is embarrassed so he keeps it a secret.

Director Comment: “The oldest in the group, he fills the role of caretaker. The others all have some screws loose, leaving him with the most common sense. He’s usually the main straight man, so he’s often worrying. He loves cute things, and gets excited like a child when he finds something cute. His character point are his slightly droopy eyes.”

Kinako’s Comment: “I made him nice looking, but also a little dangerous. He’s the oldest character, so he looks adult, but he loves Rabiman (the game’s mascot), so he’s also a bit cute.” 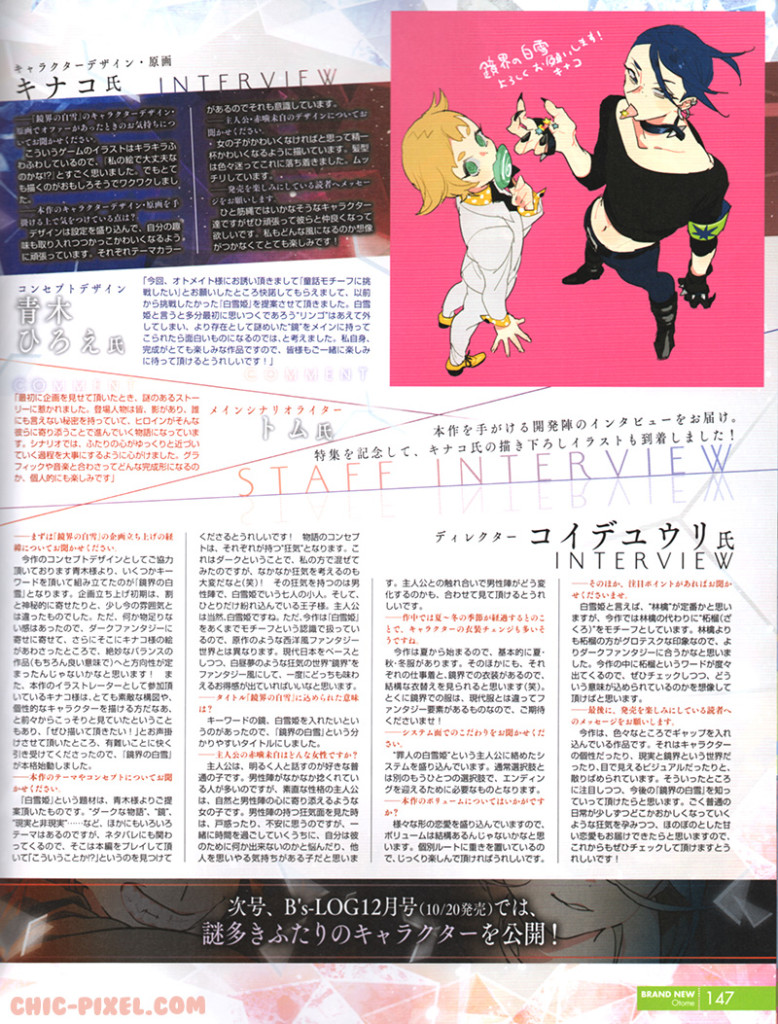 The last page of the special segment on Kyoukai no Shirayuki features interviews with Kinako, the director Yuuri Koide, and comments by the main scenario writer Tom and concept designer Hiroe Aoki. I especially love the illustration of Saji and Shikimi at the top right. At the bottom, there is a notice that two more characters will be unveiled in the December issue of B’s Log (most likely the final two characters featured in the trailer). I’ll definitely be picking that up, so expect more info next month!