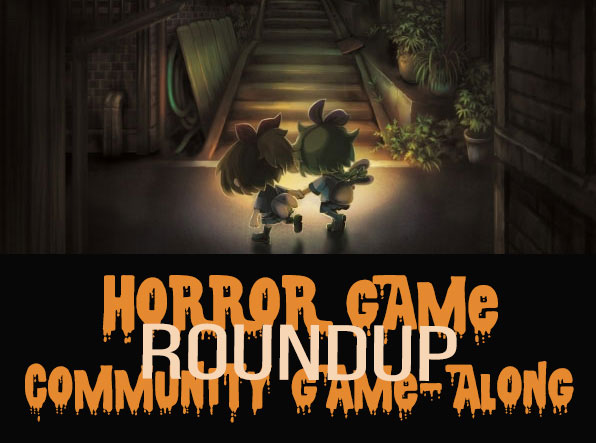 The Community Game-Along roundup posts are making a comeback, and what better way than with a slew of recommendations from October’s horror game theme? If you’re looking for some horror game recommendations, read on to see what everyone thought of their picks for the month!

Over at Tales of the Backlog, Capsulejay published a review of the free Shin Megami Tensei promotional game Synchronicity Prologue, which is available to download for free from Atlus Japan’s website until December 24th. It’s in Japanese, but there’s a fan translation available! I like that Capsulejay includes a “completion time” on the review – super handy if you want to know if something is short enough to squeeze in in a weekend!

Bryan of The Gay Gamer published some updated thoughts on Yomawari: Night Alone, a game he started but put down earlier this year. Gaming Hell also shared their review of the game! Its sequel, Yomawari: Midnight Shadows, came out later in the month, and I gave away 5 copies to Chic Pixel readers! (I’ve got a giveaway going for November’s Game-Along, too, so check it out!)

On YouTube, Ume Alice participated in #HorrorGameOct by playing through some lesser-known horror games, including the visual novel Sound of Drop -fall into poison-!

Meanwhile, Nicholas Diak chose to review a retro title that’s a little less spooky: The Berenstain Bears and the Spooky Old Tree for GBA! (As an aside, you’ve heard about that totally wild collective memory of Berenstain being spelled BerenstEin, right?!)

The Misanthropop blog celebrated by posting coverage of mostly indie games ranging from the “trip simulator” Hypnogogia to a game about the Friend Zone. The forth wall-breaking found object game Imscared looks particularly terrifying, and I’m glad to be able to read an article about what makes it interesting instead of actually having to play it. Check out Misanthropop’s October Terror Story tag for even more games!

Other games played for the horror Community Game-Along month include: Mary Skelter: Nightmares, Luigi’s Mansion, Until Dawn, Obscure: The Aftermath, A Rose in the Twilight, The Evil Within 2, Castlevania: Harmony of Dissonance, Parasite Eve, Dead Space, and Yo-kai Watch 2: Psychic Specters.

Thanks to everyone who participated this month! It was such a great way to get in the Halloween spirit. Unfortunately I can’t include everything, but if you have a blog post, video, etc. that I missed, please let me know! To finish up, here’s a few tweets from the hashtag:

And don’t forget, November’s theme is visual novels, so grab one and share your thoughts using #VNNovember!