Goodness me, I had no idea it’s been over a month since I did a Memos from Mamemura post! Don’t worry, all two of you who follow this series, I haven’t forgotten about my colorful Animal Crossing: New Leaf town. In fact, I’d say I’ve been playing nearly every other day. With the international release less than two months away, I hope to get back into weekly posts starting next week, so do look forward to that! In the meantime, I’ve got a lot of ground to cover… 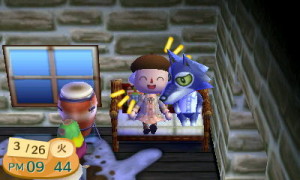 First thing’s first: Rocky better watch out! If he’s not careful, I might just steal Lobo away… 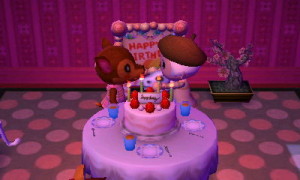 Doremi and I share a special moment on her birthday. 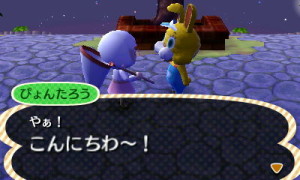 Easter in Animal Crossing is always a fun holiday, especially if you’re too old to do a real-life egg hunt, but I have to say, Zipper T. Bunny is rather nightmare-inducing! I’m not the only one who thinks he’s more creepy than cute, am I? 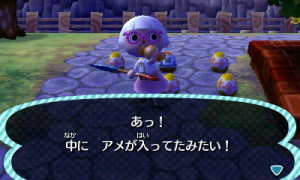 Easter eggs can be found scattered around the town. Bring one of the six different designs back to Zipper T. and he’ll reward you with an item from the Easter furniture set. Alternatively, you can eat the eggs, and inside will either be a coupon which you can exchange for a special item, or a piece of candy to eat. 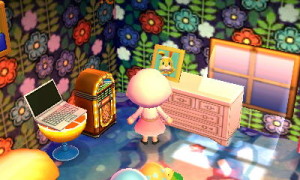 I managed to get Zipper T.’s photo, but I was content with snapping this screenshot and immediately putting it in storage. You can see part of one of the Easter items directly below my character. 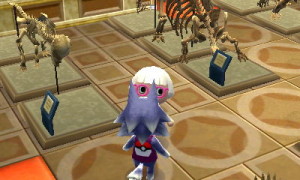 It’s always fun to run into villagers outside of the main housing area. But wait! What’s that Lobo’s wearing…? 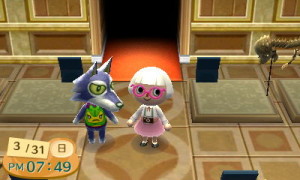 Why, it’s my Swadloon QR design! There’s nothing more satisfying than seeing villagers wandering around in the clothes you made. Lookin’ sharp, Lobo! 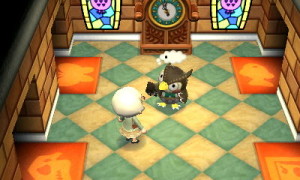 I can’t believe I finally unlocked the ability to build the second floor of the museum! After donating more than 20 items, Blathers will appear to be deep in thought, and you can initiate a conversation with him where he’ll request a second floor. Of course, you’ll have to scrounge up some money to pay for it! 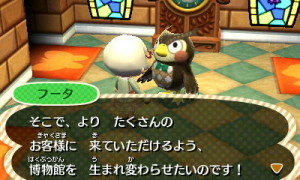 Why did it take me so long to unlock this option? Well, it turns out you not only need to donate 20 different items, but you need to have donated at least one from each of the four categories (fossil, insect, fish, and fine art), as well. I kept ordering items from Redd, but they all turned out to be fakes until now! My word of advice to anyone getting the game in June: buy something from Redd every time he visits your town, or it could take you six months to unlock the second floor of the museum, too! (you need to have the museum to get Brewster’s café, so it’s definitely worth doing) 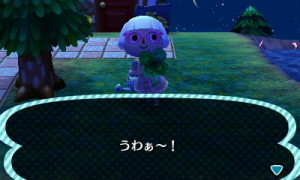 I found a four-leaf clover! Apparently these are rare, but I don’t think you can do anything with them besides putting them in your hair.

April Fool’s Day features a strange little game where Blanca the no-face cat appears and turns into each of your villagers to see if you can guess which is the real one and which is the fake. You need to guess based on clues given in the dialogue, so it can be a little tricky if you aren’t paying attention!

Guess correctly and the villager will be delighted that you knew it was the real them and reward you with their picture. You don’t need to guess every single one correctly to get Blanca’s photo – as long as you play the game with every single member of the town, you’ll get Blanca’s picture in the end. Another creepy photo for the storage bin! 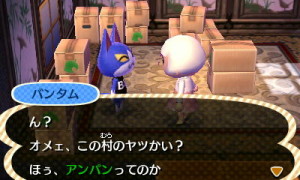 Why, it’s Tom! I’m happy to say he’s the first cat to move into my village. 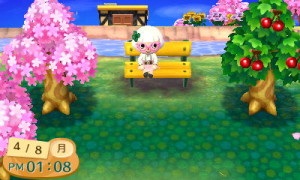 Cherry blossom season is almost as fun in Animal Crossing as it is in real life! Too bad the villagers don’t hold some sort of flower-viewing picnic (a popular pastime in Japan). Check out my new bench and trendy four-leaf clover accessory! 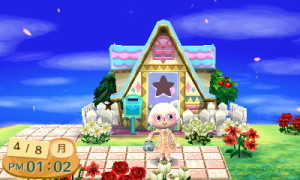 Okay, if you look at the time stamps, I technically took this one before the last shot, but I never said I did these in order! Here’s a simple picture of my current house. Notice the cherry blossom petals floating by? 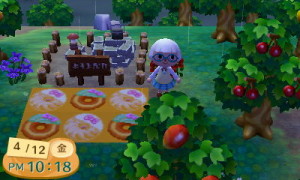 I am beyond ecstatic that I found a QR code for the Mister Donut Hello Kitty donuts! 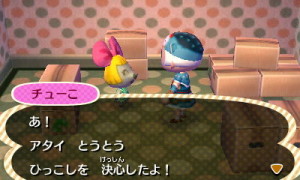 All good things must come to an end… Well, I’m not sure that’s entirely true in this case, as I was never a huge fan of Chuuko! When she said she was ready to see a new village, I decided I wouldn’t stop her, as she isn’t my favorite villager and I always like to see new faces. I wonder who will move in next? 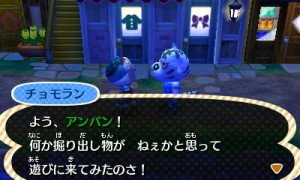 Why, just when I thought I’d gotten rid of you, Rolf! Apparently villagers that used to live in your town will sometimes come to the shopping district for a visit? This was the first time it’s happened to me! 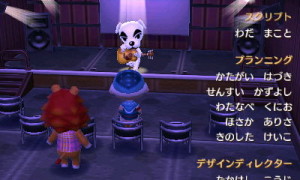 Thought this was pretty cute! Arthur and I are being serenaded by K.K Slider. 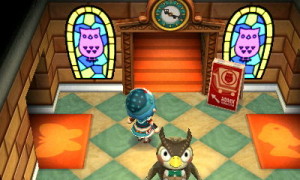 There it is, the second floor of the museum! I’ll take some screenshots of what’s upstairs once I actually purchase an extra display room to put things in (yes, literally everything costs money in this game…). 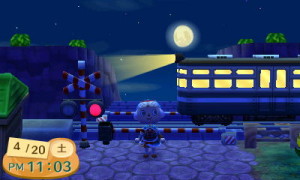 Thought this was a pretty great picture of the train going by! I’m pretty sure it’s random. 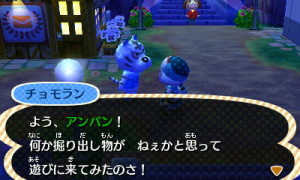 Seriously, Rolf? This is the second day in a row! I wonder if it’s possible for a villager who used to live in your town to move in again…

Finally, here’s a cute little “wiggle” gif of my adorable Arzuros outfit and my very colorful house! You’ll notice I actually haven’t upgraded my house all that much yet… It’s so very expensive! Let me know what you think of the gif – I might make more in the future if it’s a hit.

I hope you enjoyed this latest Memos from Mamemura installment! As always, feel free to ask questions in the comments!

MDi, The One They Call M Disk@mdiskplaylist·
18h

Do you like platformers? Do you like Kirby games? Do you want to find a fun way to celebrate Kirby's 30th anniversary? Well join us at the Community Game-Along with your favorite Kirby platformer this month using #PlatforMay!