I hope you all can forgive the horrible delay in my posting the winners of Chic Pixel’s 2nd Annual Holiday Giveaway, but better late than never, right? Let me tell you, jet lag is a killer!

Well, without further ado, here are the winners as determined by the powers of Random.org:

Manga: An Anthology of Global and Cultural Perspectives:
#2 – JRPG Club! 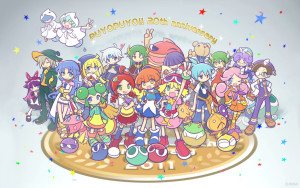 Thanks so much to everyone who entered, and congratulations to the winners! There were 14 entries for Puyo Puyo!! versus a mere 6 for Manga. I wish I could afford to give everyone a prize, but alas, that’s all I have for this particular giveaway. As a shameless plug, I will actually be giving out a few more odds and ends on my Twitter account over the next couple of days, so if you’re not following me already (@apricotsushi), please consider doing so!