Those of you who read my last post on the Animal Crossing: New Leaf 3DS LL were probably thinking that was the end of it, right? Well, think again! Bryan over at The Gay Gamer unintentionally gave me a brilliant idea when he commented on the small size of the LL’s box in one of his recent posts. What kind of idea, you ask? Well, I’d prefer to show, rather than tell: 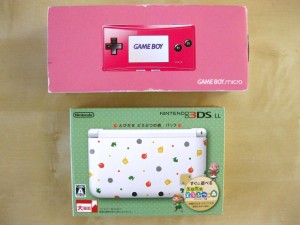 Game Boy Micro and 3DS LL comparison photos! It dawned on me how funny it is that the LL is so large and the micro is so small, but the LL utilizes much more economical packaging than the Micro. Take a look at the thickness of the two boxes! 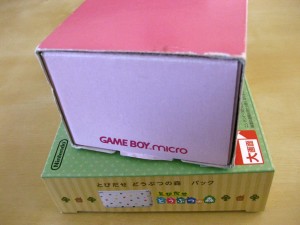 The Micro box looks massive in comparison! The systems themselves, however, are an entirely different matter: 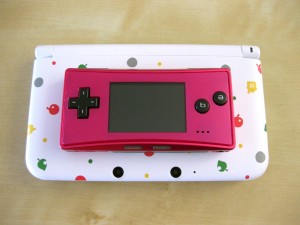 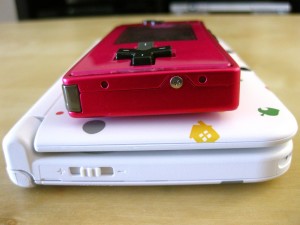 It may be hard to tell in the second photo, but the Micro is still thinner than the LL. Of course the weights are very different, but I think the neatest thing to come out of comparing the two handheld’s packaging is being able to reflect on how hings have evolved over the years! The Micro came with a charger, while the LL didn’t, so that does factor into the size of the box, but the Micro’s box definitely feels like it still has a lot of wasted space compared to the LL’s.

I also can’t believe the Micro came out in 2005! That wasn’t that long ago, really! It launched one year after the DS was released, though, so I can understand why it didn’t do so well. Can you imagine if Nintendo came out and said they were releasing a revamped DS now that the 3DS is out? Well, actually, with all the crazy things Nintendo is doing these days (like not releasing the Animal Crossing: New Leaf  3DS LL outside of Japan, for starters!), I suppose I could imagine such a scenario…