Now here’s a Square Enix title that may come as a bit of a surprise: The company is set to release an iOS/Andriod title called Otome Break, which is described by the official site as being an “android girl raising simulation.” Basically, players spend their time communicating with one of three android high school girls, slowly unveiling their individual stories and hopefully steering them towards becoming a true “otome,” or “maiden.” The title is set to release in Japan this August.

I’m not really interested in discussing the merits of this title per say, but rather who the intended audience of this title is meant to be. Many western sites who have offered coverage on Otome Break have called it an “otome game,” which I personally feel is a little misleading. As mentioned above, the word otome literally means “maiden” in Japanese, but is also used to refer to a whole subgenre of visual novel/dating sim games aimed at a female audience (you can a more in-depth analysis Otome Game Primer). On the flip side, similar titles that are created with a predominantly male audience in mind are called bishōjo (lit. “beautiful woman”) games.

The “otome” in Otome Break is clearly referring to “maiden,” given the premise of the game. Three young android girls want to discover what it means to be a real lady, and it’s your job to teach them how… Sounds pretty obviously bishōjo to me.

That said, there are many otome games that appeal to their female audience’s interest in being an older sister or motherly-type figure. In fact, we can trace “raising simulators” back to titles like Princess Maker, where it’s the job of an ambiguous protagonist to raise a young princess into a capable adult woman.

Now, it’s almost universally accepted that the Princess Maker games are bishōjo titles aimed at a male audience. Granted, there are many female gamers that play Princess Maker, as I’m sure there are both men and women who play more traditional bishōjo titles such as Tokimeki Memorial, but it’s worth noting in this comparison to Otome Break that the “raising sim” subgenre has had, to my knowledge, a predominately bishōjo bent to it.


Another point that is worth considering in raising sim titles is how the player character is framed within the narrative. In Princess Maker, the player is acting as a parental figure for the young girl, which allows both men and women to play the game from a relatively equal standpoint, even if it has aspects that make it bishōjo. Otome Break‘s official website, however, explicitly states that the protagonist is a classmate of the three young android girls, making it clear that the player is meant to feel more of a brother/sister-type connection with the girls, rather than a maternal/paternal one. Would this make it easier or more difficult for women to connect with the narrative? I’m not entirely sure.


Considering that I’m not currently living in Japan and am as such not exposed to promotional materials to Otome Break out in the wild, I can’t really say definitively whether or not Square Enix is taking a proactive stance on the bishōjo vs. otome categorization or not (this would be made very clear by where they chose to advertise the title). The promotional materials released online have so far been relatively vague, but I stand with my initial impression that this is bishōjo and not otome. Case in point: 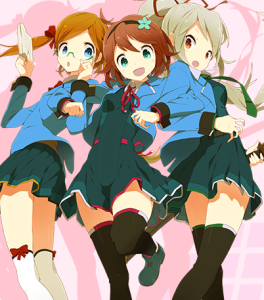 This is an image taken from the official website. Now, correct me if I’m wrong, but I consider these relatively highly sexualized representations of young girls. Not only is the angle a worm’s eye view, giving the perfect almost-panty shot, but the gal in the center’s clothes are literally sticking to her skin in a way that not only accentuates her breasts, but her crotch, as well. Can anyone honestly argue that this image was drawn in such a way as to attract a predominantly female audience?

It’s worth mentioning that I’m not intending to rule out the possibility that this is a yuri, or female/female, title, but I would be very surprised if that was the angle Square Enix is going for –– even if this is Japan we’re talking about, I don’t think a big name like Square Enix would knowingly advertise a title with overt lesbian themes (note: there are both otome and bishōjo titles that feature female/female romantic relationships, so even yuri alone wouldn’t necessarily settle the debate of what subgenre Otome Break falls into).


In the end, it doesn’t really matter what Otome Break calls itself, as long as it’s an interesting and fun game for those who choose to pick it up come August. But the fact that some people have chosen to argue that this title must be otome just because it may instill some feeling of sisterhood seems a little far-fetched to me given the promotional materials available outside of Japan.


Otome, bishōjo… who cares?! Do you think Otome Break has any appeal, or is it some kooky thing made for purely Japanese audiences?