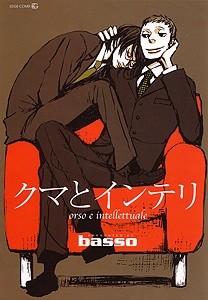 I was surprised and delighted to find that this month’s Manga Movable Feast was to feature one of my favorite artists, Natsume Ono. If you haven’t yet heard of the Manga Movable Feast, it’s basically a week-long virtual book club held by manga bloggers once a month. Some great content has been contributed so far this week, and I’m excited to dip toes in the water and join the party!

Natsume Ono is most famous in the West for House of Five Leaves and Ristorante Paradiso, two enthralling and expertly-crafted manga series. Little known outside of Japan and her ardent international fans, however, is her work under the pen name Basso (sometimes written BASSO). While some manga artists might choose a pen name to hide their identity, Natsume Ono’s style is so distinct that one would be hard-pressed not to recognize her (though there is a noticeable difference in the style she employs as Basso). To the contrary, I see Basso as a way for Natsume Ono to clue her readers in on the content of the manga before they read a single page. For you see, Natsume Ono’s pen name Basso is exclusive to her boys’ love titles. 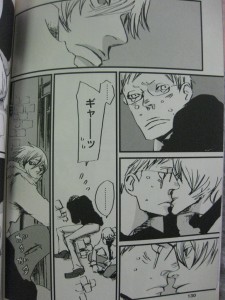 As basso, Natsume Ono has published a plethora of boys’ love manga, but today I would like to focus on one of my favorite collections of BL short stories, which happens to be basso’s Kuma to Interi (“The Bear and the Intellectual“). Kuma to Interi is a collection of short, interconnected stories that all share a few common themes: Italy, men, suits, glasses, politicians, and gelato. One of the most delightful segments of the book is the section devoted to stories centered around the theme of gelato –– they’re short but sweet, with a hint of melancholy, just like the iconic Italian dessert they were inspired by.

You won’t find any traditional BL in Kuma to Interi, much like the rest of Basso/Natsume Ono’s works. Her characters range from grey-haired politicians to gangly waiters, and the erotic content is much more fluid and real than most BL. An interesting example of this is the first story, Conte, which contains a “reversible” couple –– BL is so set in the seme/uke (top/bottom) dichotomy that they actually have a word from when a relationship deviates from that stereotype. Kuma to Interi is refreshing in its raw, non-idealized look at life and relationships, and is one of the most satisfying BL short story collections you can read.

Or could read, if it were localized in English! I’d argue that above all of Basso’s BL titles available, Kuma to Interi would be the best place to start for any publisher looking to jump into Natsume Ono’s BL manga library. Fans of her work will undoubtedly be delighted to see that she gives the same depth and care to her BL stories as she does her more mainstream work, and BL manga aficionados looking for a change from the overwhelming bishonen fare now available in English will both find much to like about Kuma to Interi.

I know I’m not the first person to put out the call for Basso’s works to be localized into English, so somebody make it happen! I’d love to see more people read this collection. For now, I’ll tantalize you with gorgeous pages like this: 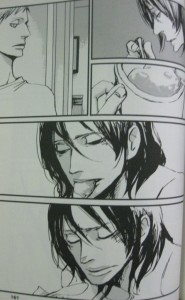