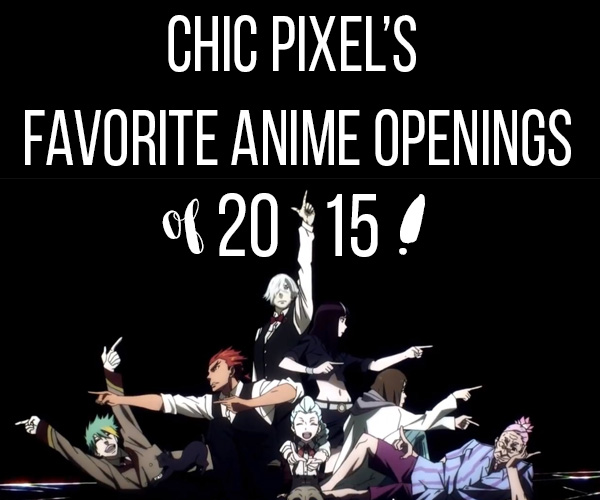 Many times, my first impression of an anime comes from its opening. They’ve had such an impact on me that at least half of my music library consists of anime opening themes! An opening isn’t just about the music, though: for it to really succeed, it must pair the song with evocative animated sequences that get you excited to watch the upcoming episode. A really good opening has you glued to the screen for the whole duration, and that’s exactly how I felt about the following five anime openings from 2015:

Osomatsu-san – This opening perfectly captures the quirky, random quality of the show. Not only that, but the song is to die for! I love that it evokes the era the original manga comes from, too. I’m very partial to openings that don’t reuse footage from the actual series, so I’m really glad that the Osomatsu-san opening is its own special kind of crazy separate from the show.

Gangsta – If I had to pick a favorite opening theme from 2015, it would probably have to be Gangsta‘s “Renegade.” This song has been on my playlist since as soon as it was available to purchase, and I still listen to it every day! Not only is the song amazing, but the monochrome animation is eye-catching, as well. I’m still sad the show itself didn’t hold up to this amazing opening…

The Perfect Insider– This is a perfect example of a well-executed abstract opening! I still don’t really know what this has to do with the themes of The Perfect Insider, if anything, but the sketchy art style was intriguing from the second I first started watching. Openings like this prove that you don’t really need to clearly illustrate something watchers will connect to the series to be effective.

Gatchaman Crowds Insight – I might be biased towards anything Gatchaman Crowds-related, but at least I’m honest! Like the first season of this colorful anime, Insight features an opening theme by White Ash paired with poppy, fun visuals. The use of real photos is also a neat touch. While it may be slightly straightforward in the way it introduces the series’ characters, that doesn’t mean it can’t be exciting.

Death Parade – This might be the greatest bait-and-switch in anime opening history. Death Parade‘s opening theme is extremely catchy with lively animation depicting the main characters having a grand old time… But when the episode starts, the tone does a complete 180! If it weren’t for my unabashed love for Gangsta‘s opening theme, this tune would surely be my favorite of 2015. As a whole package, however, Death Parade definitely stands out as my favorite anime opening of 2015.

One Punch Man is another series with an amazingly-animated opening, but unfortunately I’m not very partial to its theme song. Have another favorite that wasn’t mentioned here? Share it in the comments!