One of the best things about going to Japan is the chance to go game shopping. Last year I bought a whopping 24 games when I was in Osaka on vacation for three weeks, but this year I had to be slightly more frugal. Still, I think I came back with quite a few goodies, including some rare and very cheap finds! 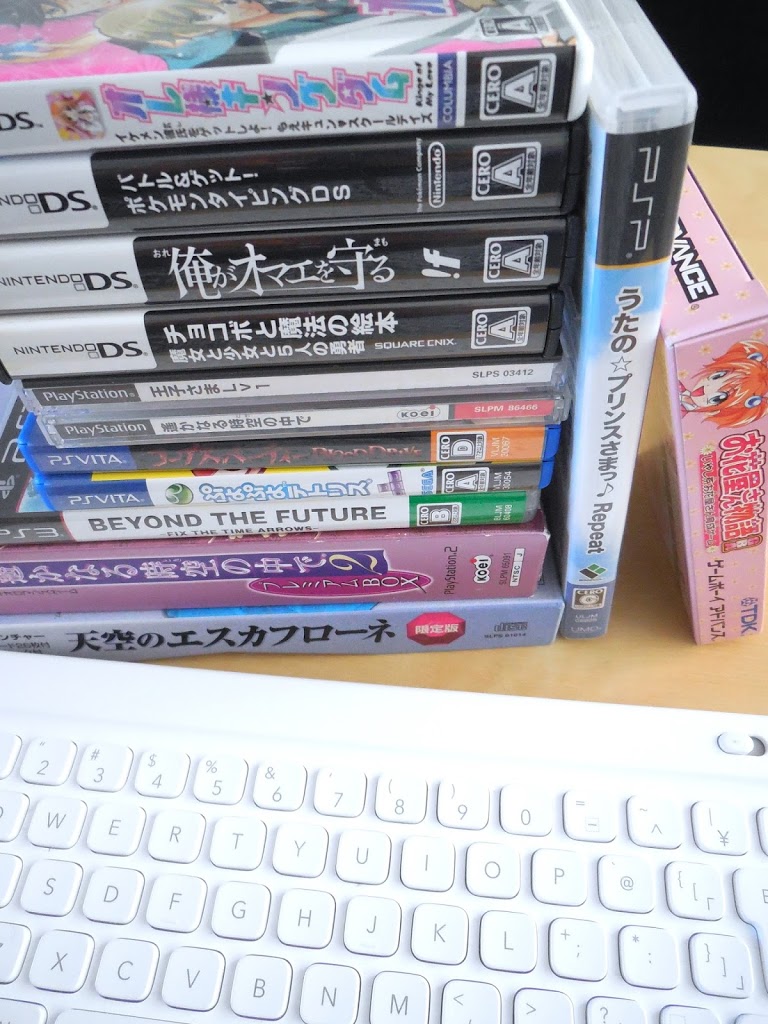 If you add it all up, I purchased a total of 13 games this trip, comprised of three PSone games, one PS2 game, one PS3 game, one PSP game, two Vita games, one GBA game, three DS games, and one 3DS game. I’m actually pretty impressed by the relatively even sampling of consoles on display in my haul overall! While I may not have bought quite as many games as I admittedly would have liked, that was largely due to the fact that three of the games purchased were significantly more than the few bucks I usually spend per game while in Japan. 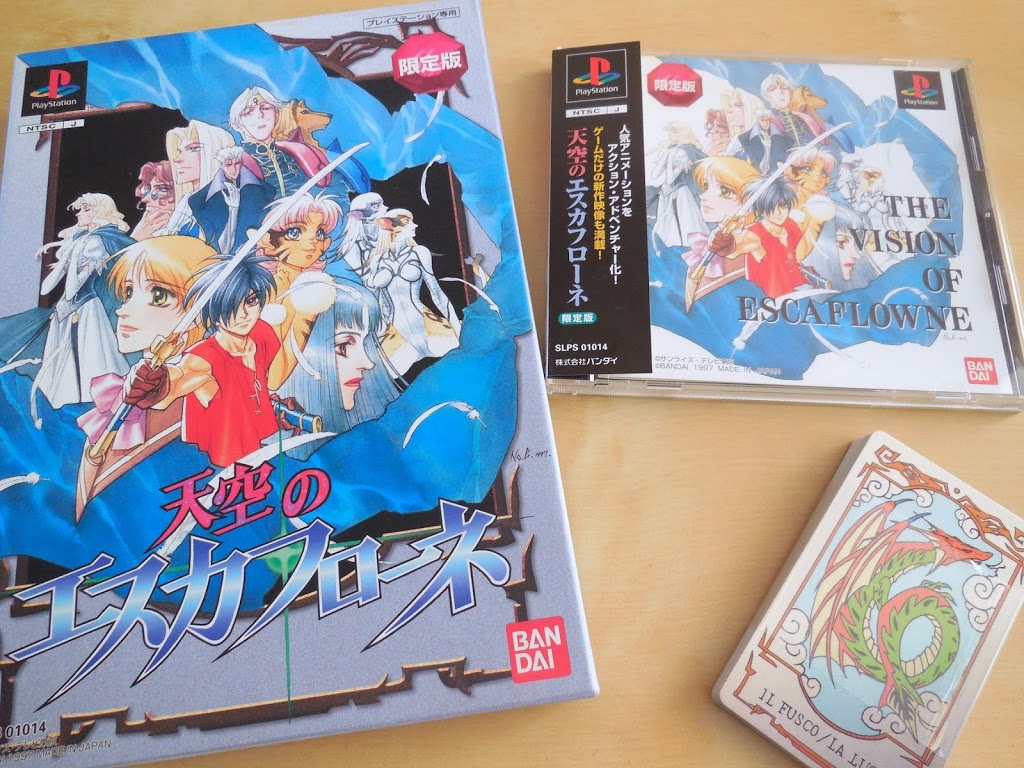 Funnily enough, one of the first game purchases I made also happens to be the one I’m most proud of! Last year I actually got a copy of The Vision of Escaflowne for about $8, but this year I managed to find the limited edition for only $15 in Akihabara, so even though I already had a copy of the game, I absolutely had to add the LE to my collection. It comes with a tarot card set and extra booklet that I’ll definitely be showing off more in-depth in a future post.

I’ll actually be giving away my extra copy of the game in my August Chic Pixel supporters giveaway, so if you’d like to be in the running, donate $5 or more to support the site and you’ll have the chance to win that and some other nifty stuff! My secretary tells me we only have two entries so far, so your chances of winning might be pretty good… 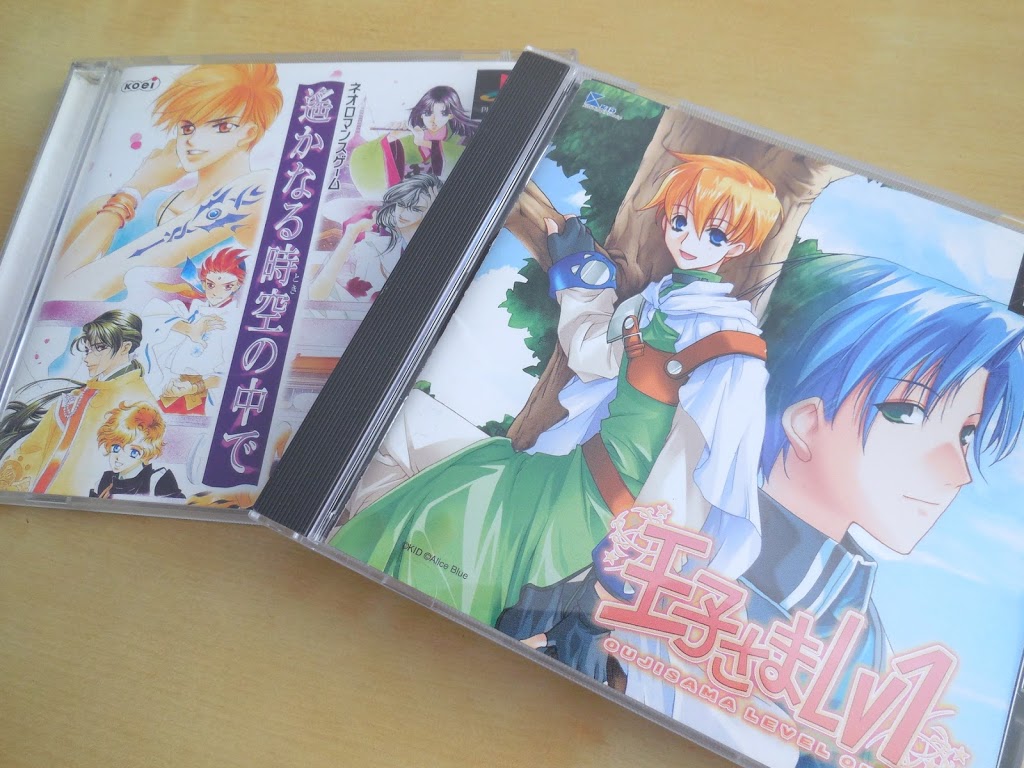 Since I’m talking about PSone games, here are the other two I picked up. The one on the left, Harukanaru Toki no Naka de, is the first otome game in the series by the same name. It was only $1, so I figured I might as well pick it up! On the right however, is a game that I totally stumbled upon by accident while I was wandering around Super Potato in Ikebukuro. Titled Oujisama Lv1, it claims to have RPG elements while apparently having an entirely male cast that may or may not all have crushes on the protagonist. You guessed it: the main reason I picked this up was due to the shōnen ai vibe! After doing a quick search on Google.jp, it appears my intuition was correct, as the game originated as BL PC RPG that spawned a fan disc and sequel, as well as a manga. I can’t wait to see what it’s like! 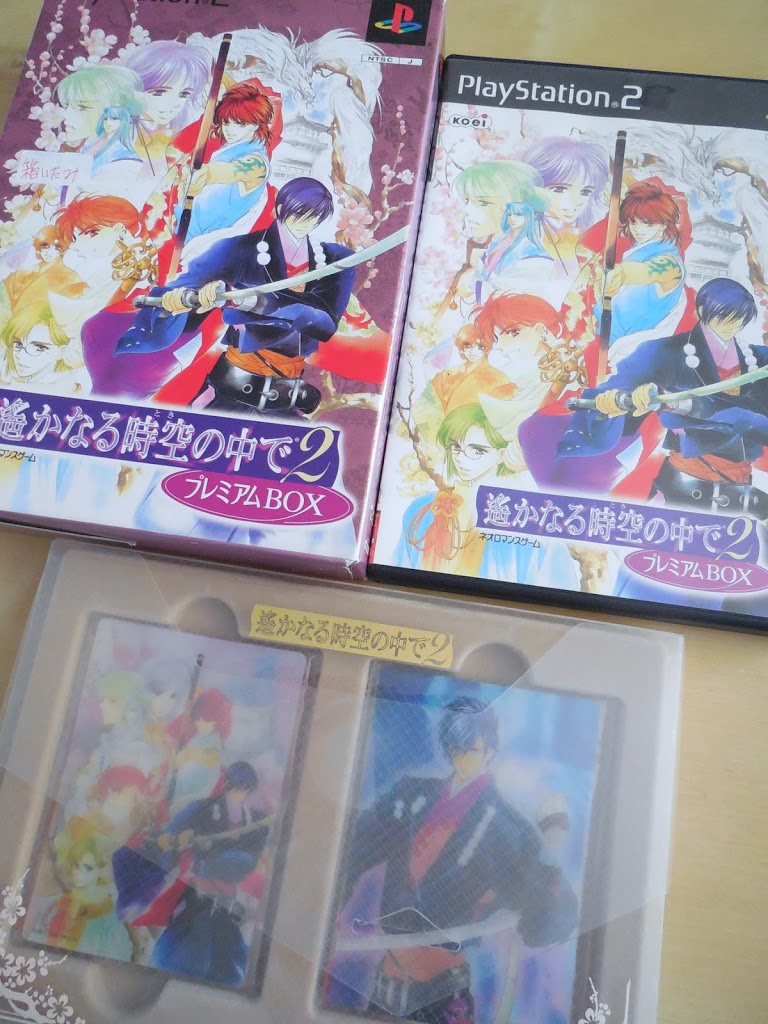 My lone PS2 purchase was the Harukanaru toki no naka de 2 premium box, which came with some art cards in addition to the game itself. What can I say, I’m a sucker for cheap otome games! 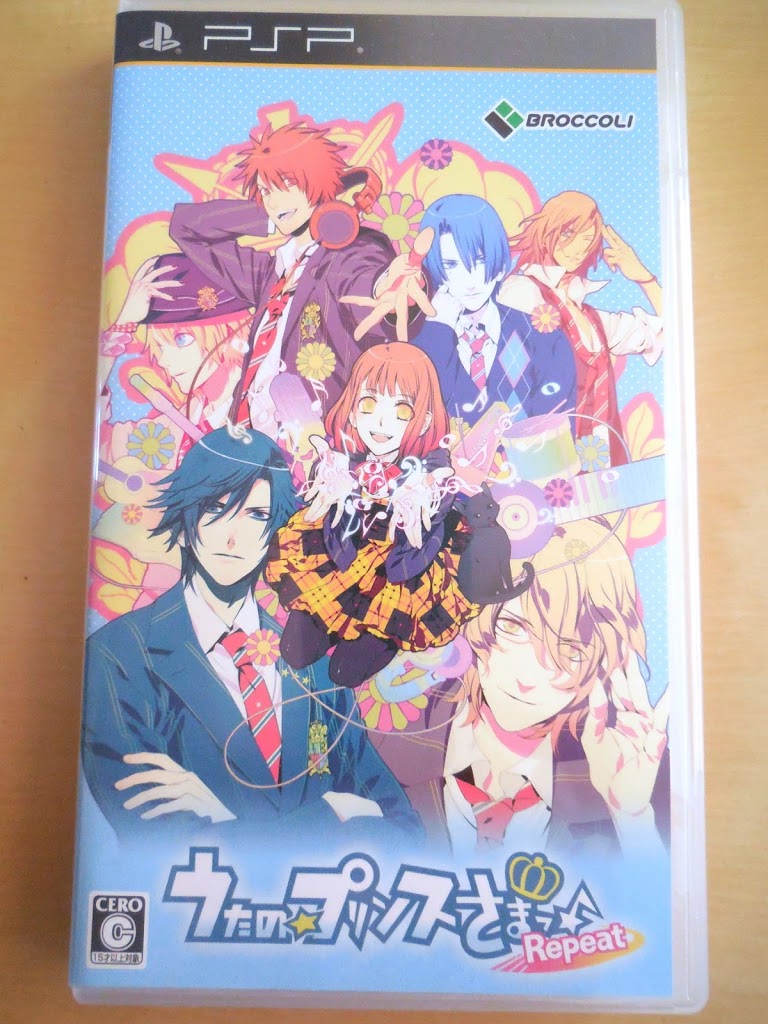 … And then there were the slightly more expensive otome games. Uta no Prince-sama Repeat for the PSP was nearly $40, as many otome games on the PSP don’t ever drop significantly in price, but it’s one I’ve been meaning to play for a while. After watching the anime, I know I’ll probably enjoy it, even though it’s very silly! 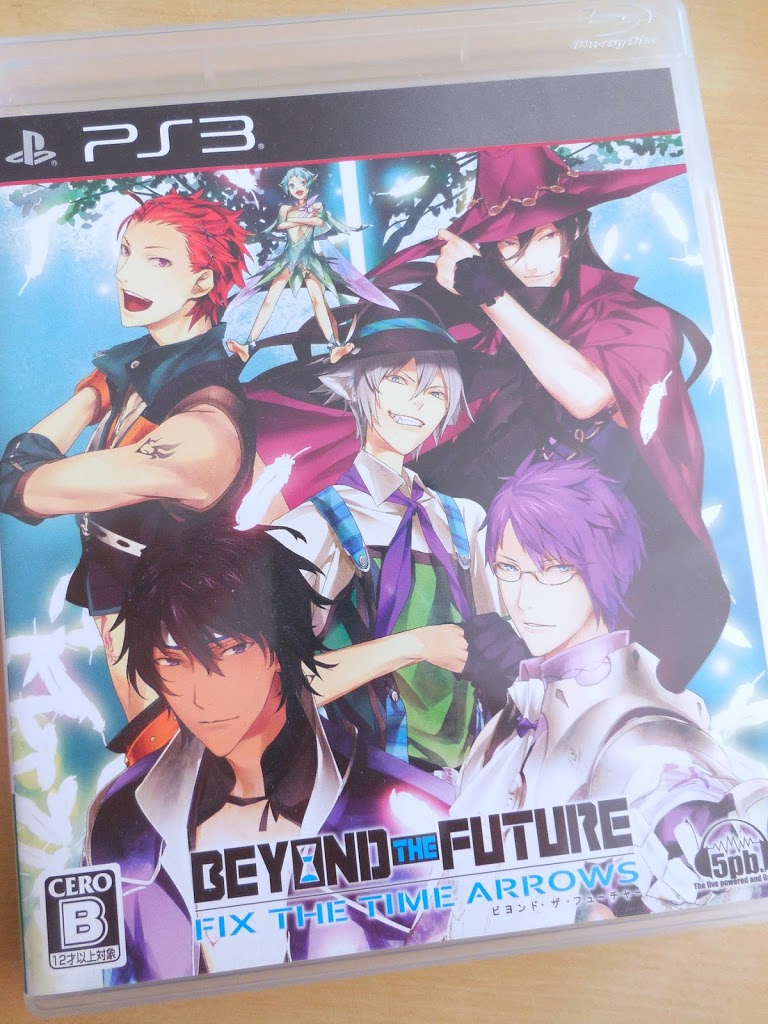 Yet another otome game! Do you sense a theme? Beyond the Future: Fix the Time Arrows is one of the few otome games available on the PS3, and though I literally know nothing about it, I quite like the art style. For $15, that was enough to sell me on it! 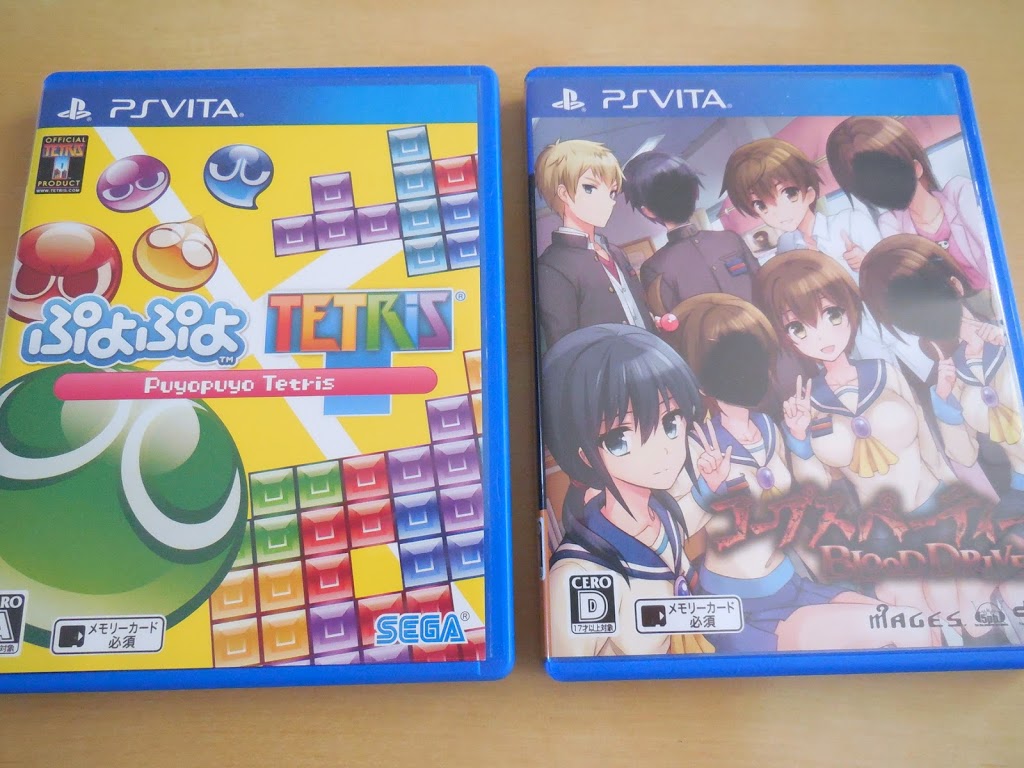 Believe it or not, these two PS Vita games were my most expensive game purchases of the trip. On the left we have the self-explanatory Puyo Puyo Tetris, which I originally planned on buying for PS3 for the couch co-op but ultimately decided it would be more enjoyable on a handheld. I’ve played a little of it and so far it has reestablished the fact that I’m awful at both Puyo Puyo and Tetris.

On the right, we have a game that actually came out while I was in Tokyo, Corpse Party: Blood Drive! The Corpse Party series are pretty much the only horror games I’ve ever gotten into, but after XSEED brought the first two for PSP out in English, I’ve been hopelessly hooked. I haven’t really had a lot of time to dig into this one yet, but it’s definitely very high on my list! 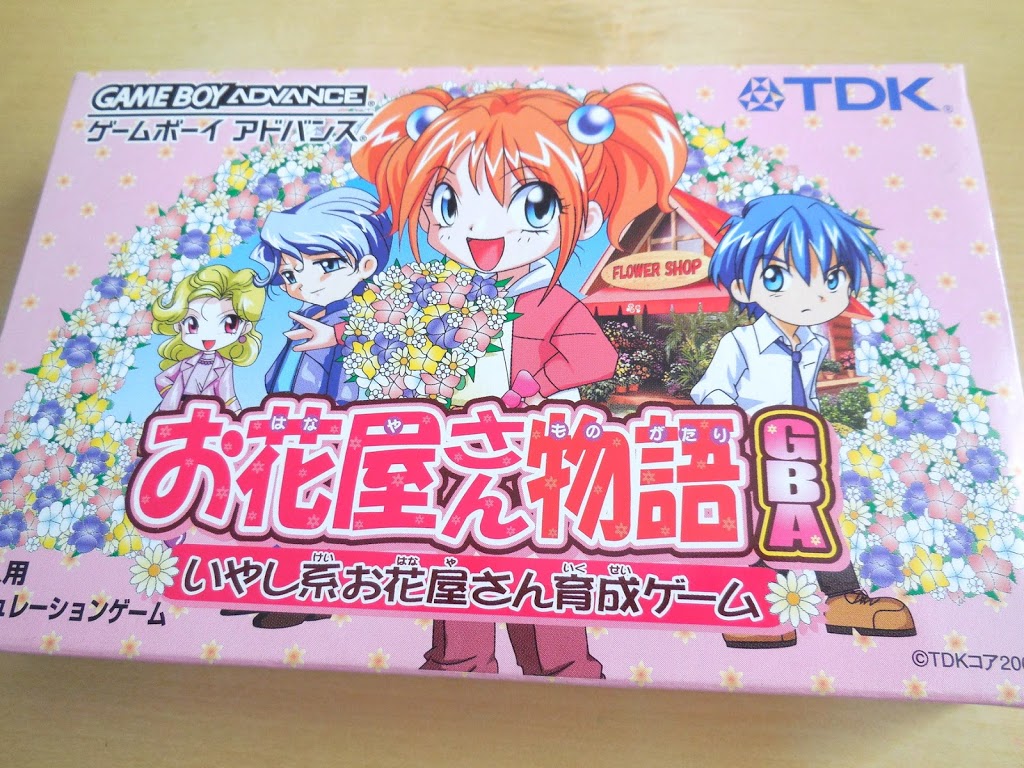 It’s a sad truth that the above game, Ohanayasan Monogatari GBA, is the only GBA game I bought during my trip, despite my obsession with them. It’s getting increasingly more difficult for me to find GBA games within my price range that I don’t already own! I’d never heard of this one before running into it during one of my routine GBA section checks (of course I had to meticulously go through all the GBA games in every game store I went to), but the cover art was cute and it seems like Harvest Moon… but with flowers. Apparently there’s a DS game in the same series that actually looks cuter, so I guess I need to put that on my list of things to get eventually! 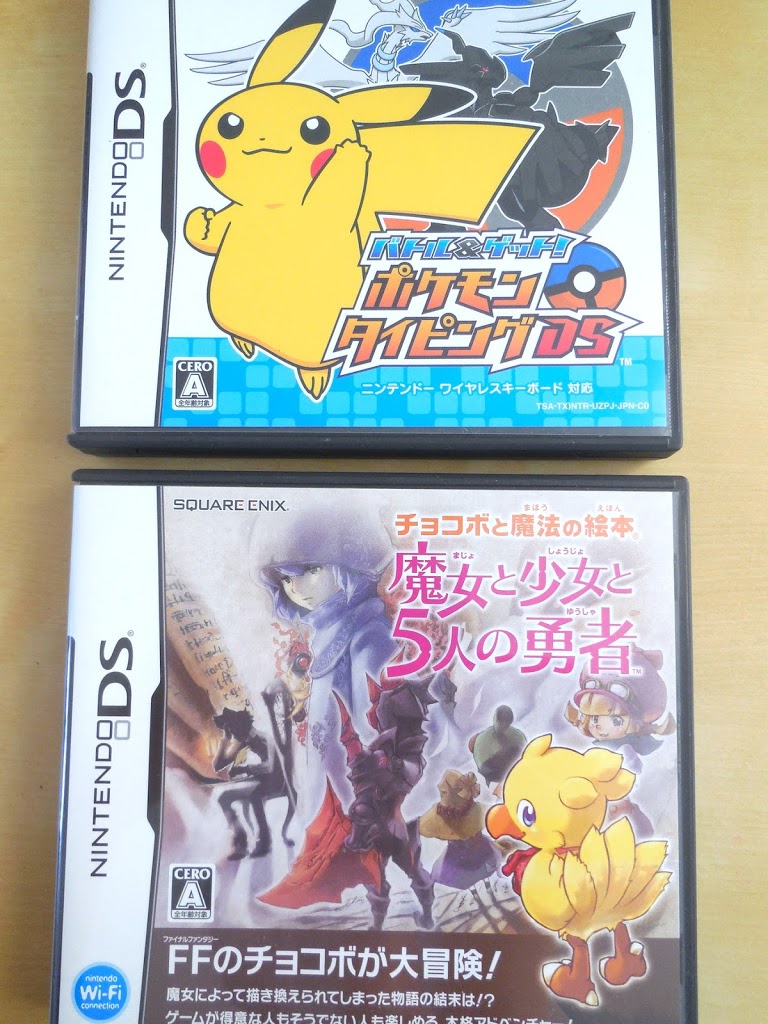 Speaking of DS games, Pokémon Typing DS is one I’ve had my eye on for quite a while now but never wanted to spend more than a few bucks on, so I was pretty stocked to find a copy with the bluetooth keyboard (pictured in the first photo) for only $5! The bottom game is Chocobo no Mahō Ehon: Majo to Shōjo to Gonin no Yūsha, which is the Japan-only sequel to Final Fantasy Fables: Chocobo Tales game. I honestly didn’t have this one on my radar at all, but after seeing it for $5 and initially passing on it, I ended up going back to the same store and grabbing it a few days later. 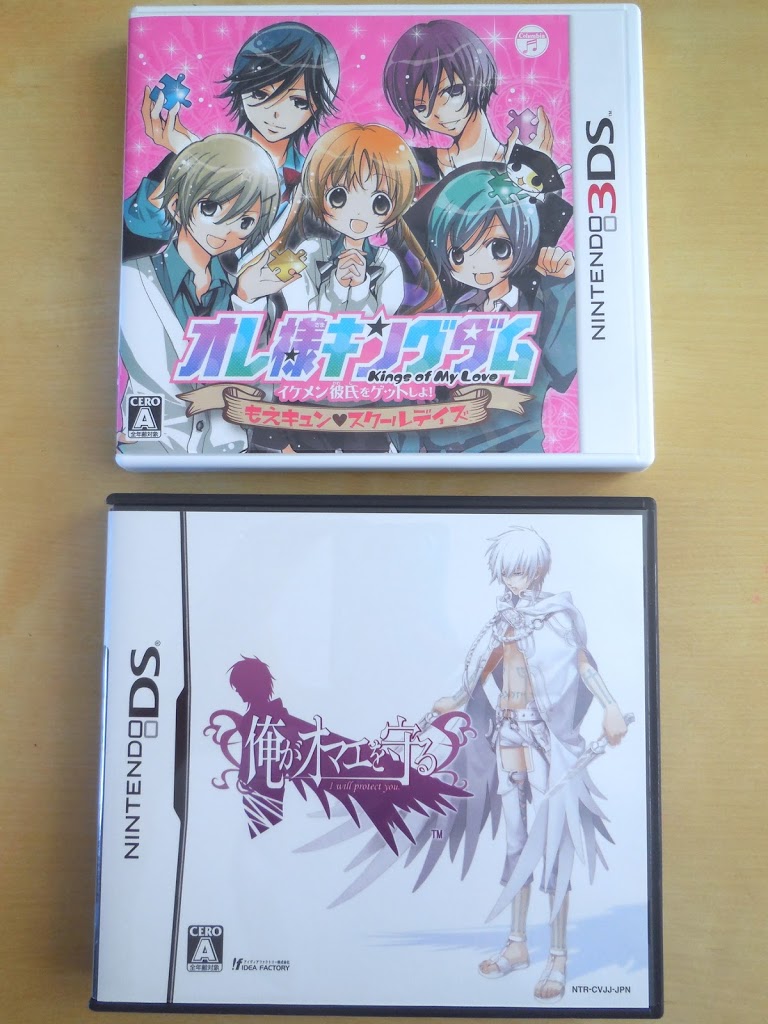 The final DS game I added to my collection was another spontaneous purchase, Ore ga Omae o Mamoru (bottom). I only knew it as an otome game with some RPG elements, but apparently it’s also a Metroidvania side-scroller? I’m definitely intrigued, but I don’t remember it getting a very good reception when it came out…

Oresama Kingdom: Ikemen Kareshi o Getto Shiyo! for the 3DS (top) is actually a game I had wanted to pick up last summer, but at over $40, I ended up passing on it. I had completely forgotten about ever wanting it until I randomly ran into it in a bargain bin in Ikebukuro the morning of the day I was returning to Australia… And for only $10, I knew I had to grab it! It’s one of the rare 3DS games that requires players to hold the system as if it were a book (think Hotel Dusk on the DS), and, of course, it’s an otome game. In the case of Oresama Kingdom, I believe it’s based on a manga series aimed at elementary/middle school girls. It’s currently going for $24 at Play Asia, which is the cheapest I’ve seen it available online, if you’re interested in checking it out!

Well, there you have it – every single game I bought while I was in Japan! If there’s any title you’d like to hear more about sooner rather than later, let me know in the comments and I’ll prioritize it!