For an anime and video game nerds such as myself, there are a near limitless number of themed cafés waiting to be dined at in Japan. Since I usually visit Osaka when I do get the chance to go to the land of the rising sun, I’ve missed out on all of the exciting themed cafés in Tokyo, of which there are many. One such café is the Artnia Square Enix café, which opened at the end of 2012 in Shinjuku. Now, I can finally say I’ve made the pilgrimage every Final Fantasy and Dragon Quest fan yearns to take! 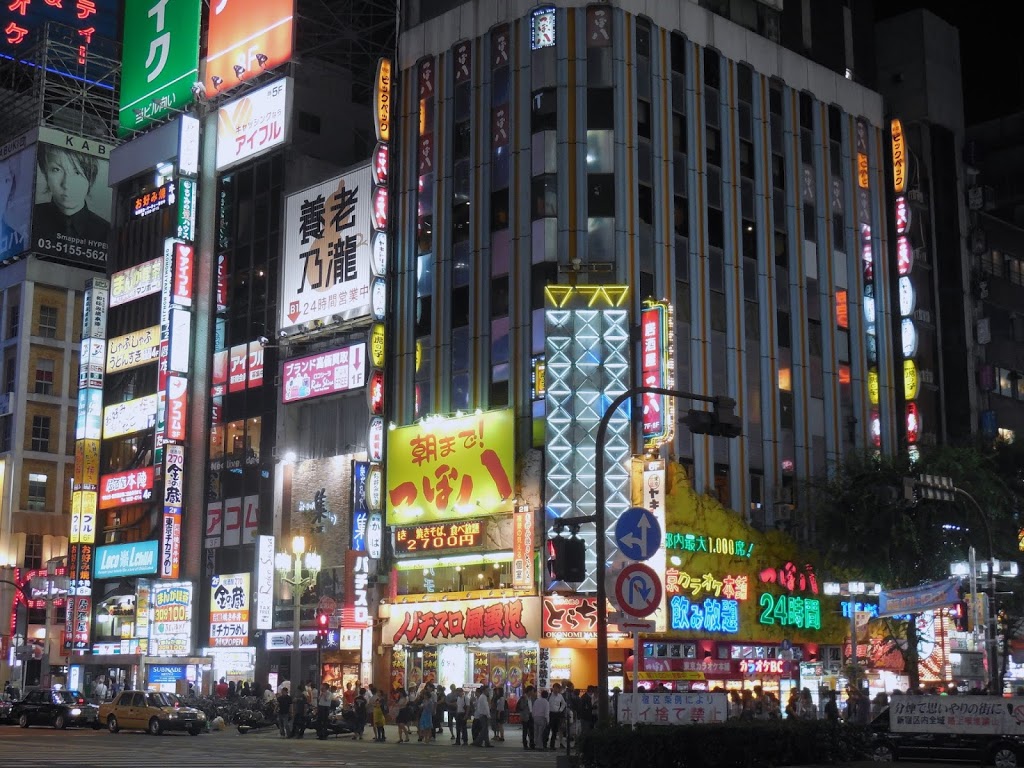 Since Artnia is located in Shinjuku, here’s a street shot I took that evening to set the scene. While the café is actually located closer to the Higashi (east) Shinjuku station, I had some time to kill before my 8:30 meeting time with Tasmanian Twitter friend Rowan (@link6616), so I walked there from the main Shinjuku station. Did you know Shinjuku station is the busiest train station in the world, with over 3.6 million people passing through it every day? And with over 200 exits, it’s notoriously confusing to navigate!

After making my way to the calmer east side of Shinjuku, I finally located the Shinjuku East Side Tower where the Square Enix main office and Artnia café are located. After looping around the perimeter of the building in search of the egg-shaped café, I finally spotted my destination: 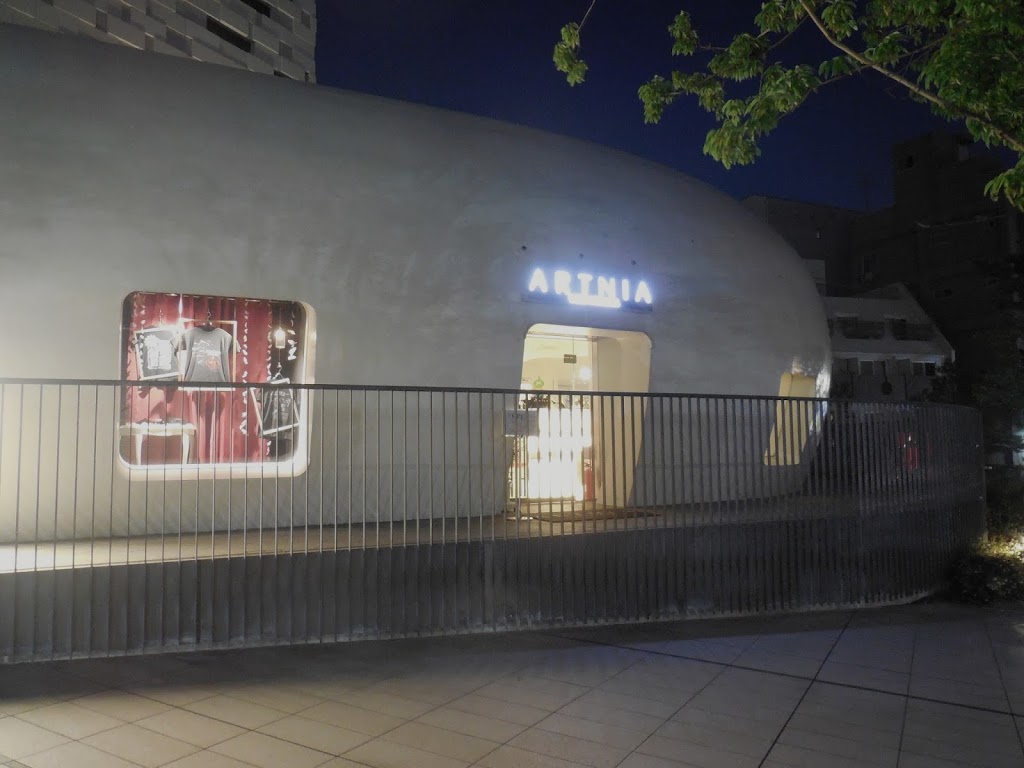 Forgive the poor quality photo, but the café was surprisingly difficult to photograph, and it probably didn’t help that I was there at night. Here’s the posh lit sign that greeted me on my way in: 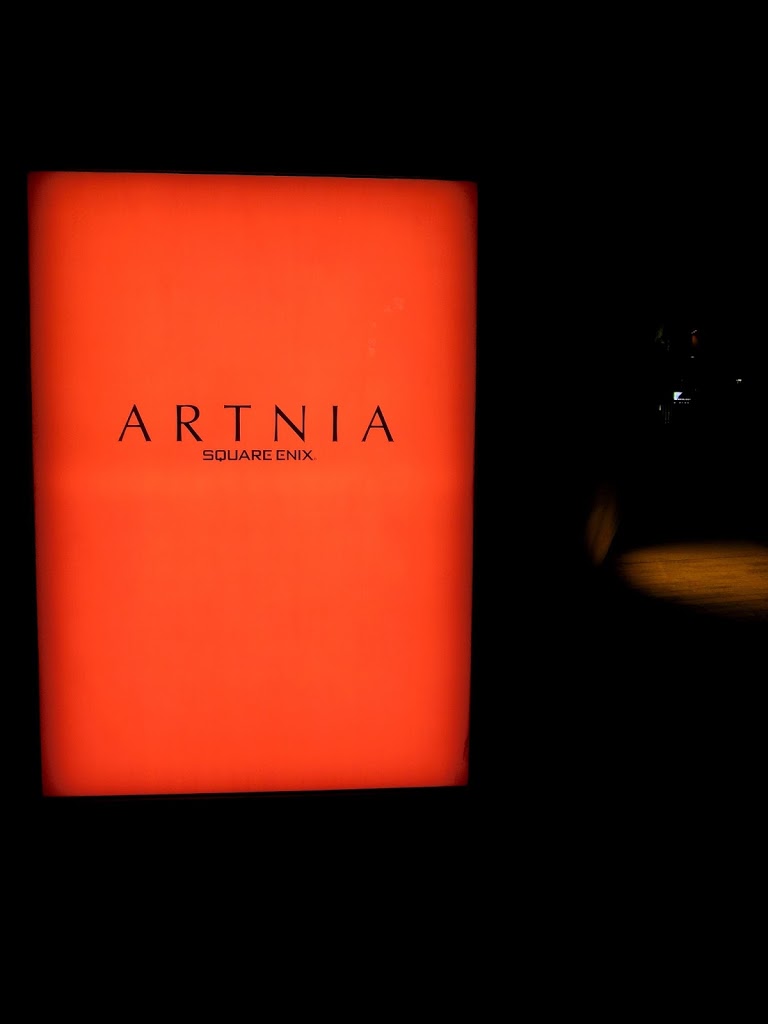 After finally meeting up with Rowan and making our way inside, it was time to order some treats! We both decided that we’d stick to dessert… After all, it’s usually the desserts that are the most creative in themed cafés. 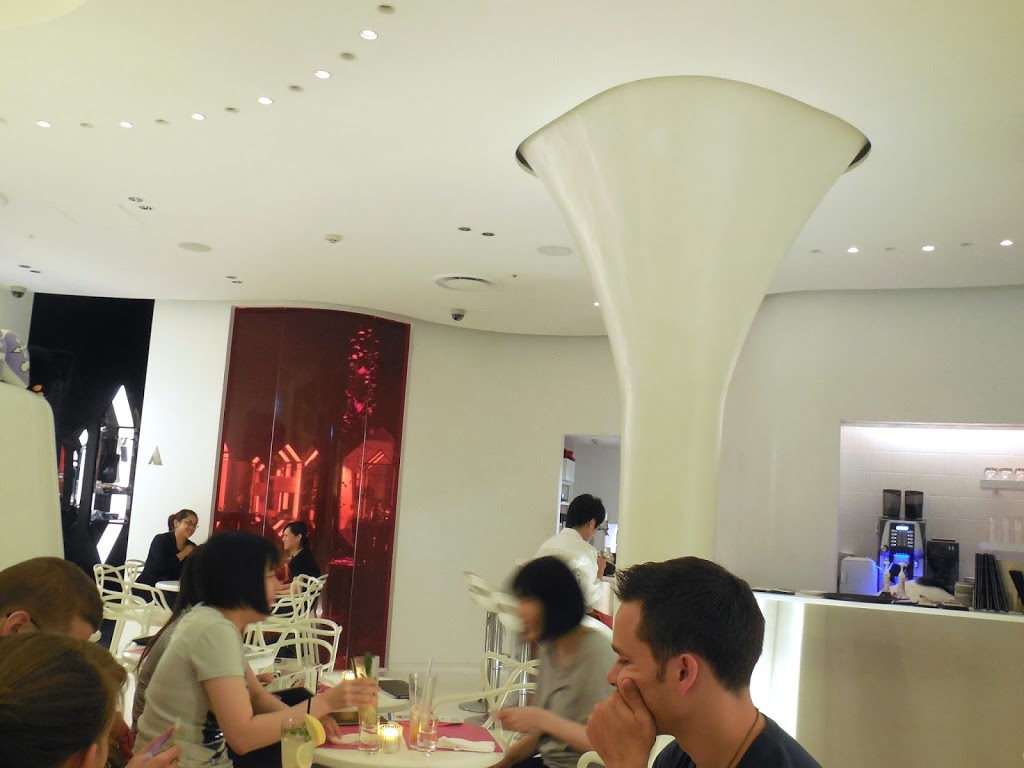 Here’s what it looks like inside! It’s not the most flattering picture, but it does give a sense of how big the café is… which is actually surprisingly small! I don’t think more thank 15 people could be seated at a time. The red area at the back left is actually a display room for all kind of fancy Square Enix merchandise, from Play Arts figures to prohibitively expensive Kingdom Hearts and Final Fantasy-inspired jewellery.
Oh, and before you ask – no, I don’t know that white guy in the photo! We just happened to be seated next to trio of foreigners. 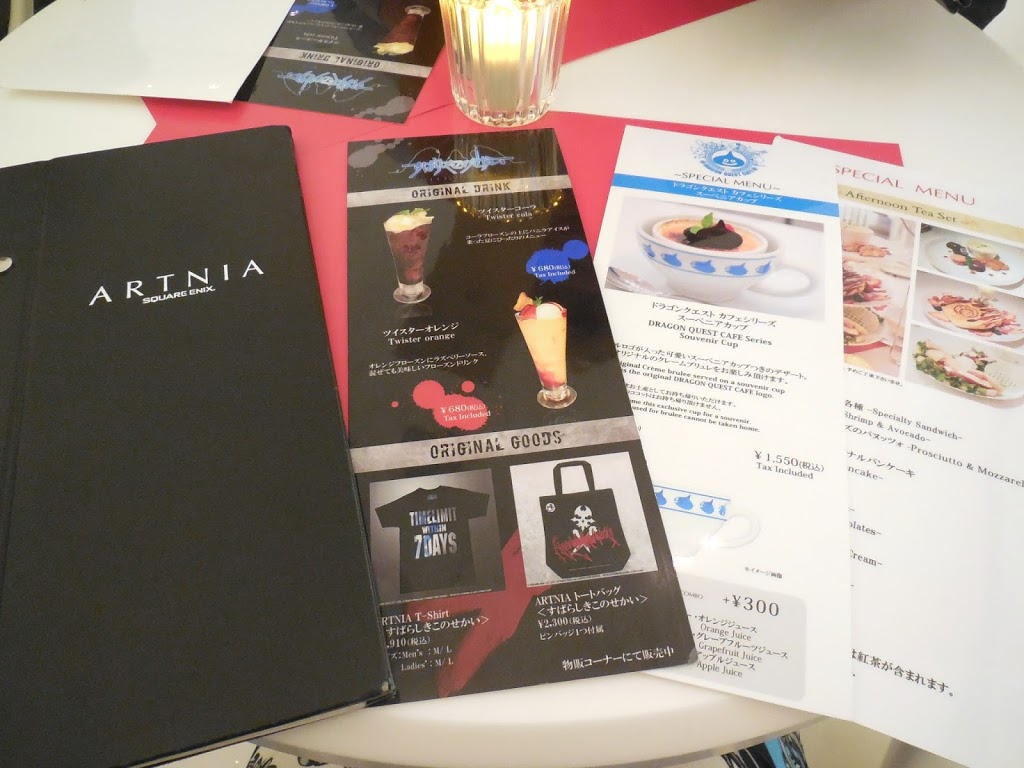 Even though I perused Artnia’s menu on their website, I was surprised to see the special The World Ends With You and Dragon Quest menus in addition to their usual fare. While I desperately wanted to try the chocobo pancakes or buster sword parfait, the Dragon Quest limited-time menu caught my eye, as not only did it offer an adorable crème brûlée dessert, but a special gift, as well! 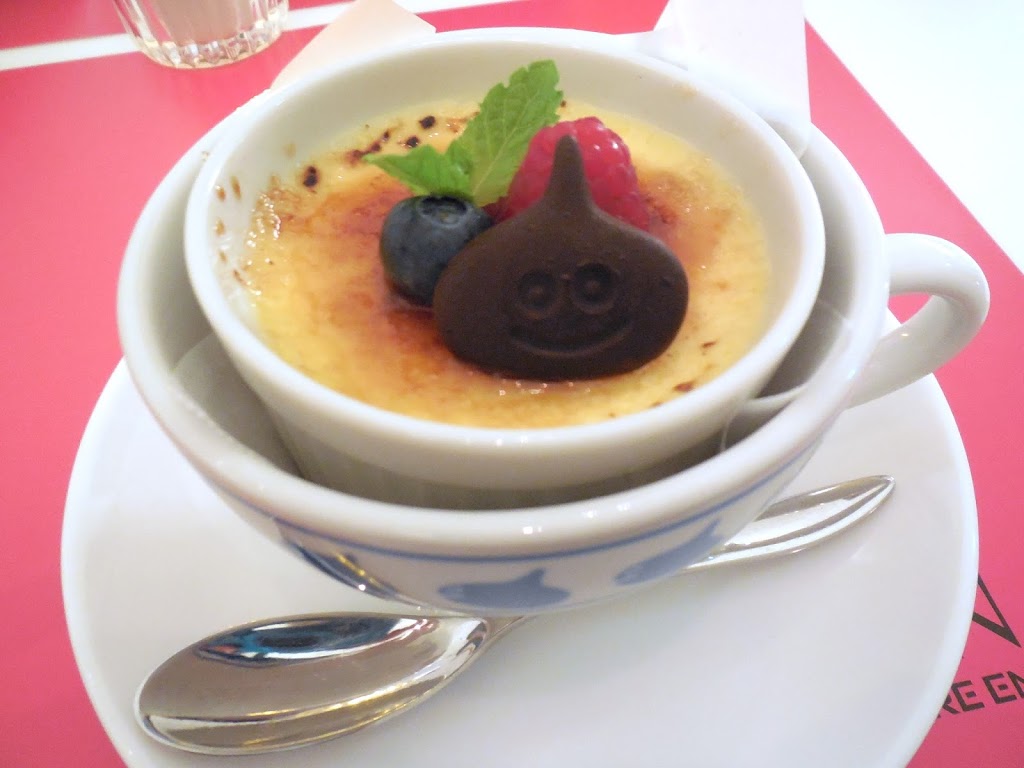 Actually, Rowan was so taken with this dessert special that he ordered the same thing! I think it’s safe to say that we were both thrilled by our adorable crème brûlées and the take home slime mugs they came in. The waiter even brought over a bag and box for us to use, and as you can see from the above photo, the crème brûlée itself was in a separate bowl so the cup didn’t get dirty. 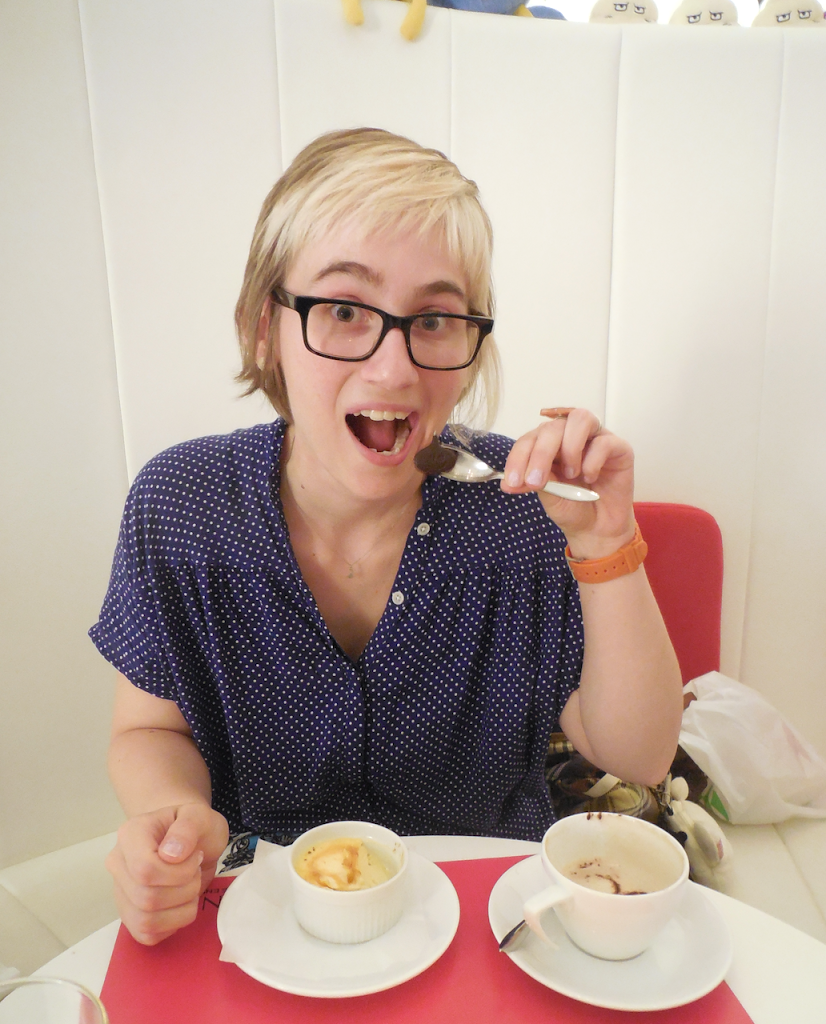 As you can see, I was quite thrilled to eat the slime-shaped piece of chocolate that adorned the crème brûlée. The whole dessert was very nice, and for only about $15 for the brûlée and cup, I thought it was very reasonable! For those of you who read my recap of the Rilakkuma Café at Tower Records, I was quite unhappy with the quality/quantity of food served, considering how high the price was. While Artnia wasn’t exactly cheap, I think their prices were much more reasonable, and I left feeling very satisfied. 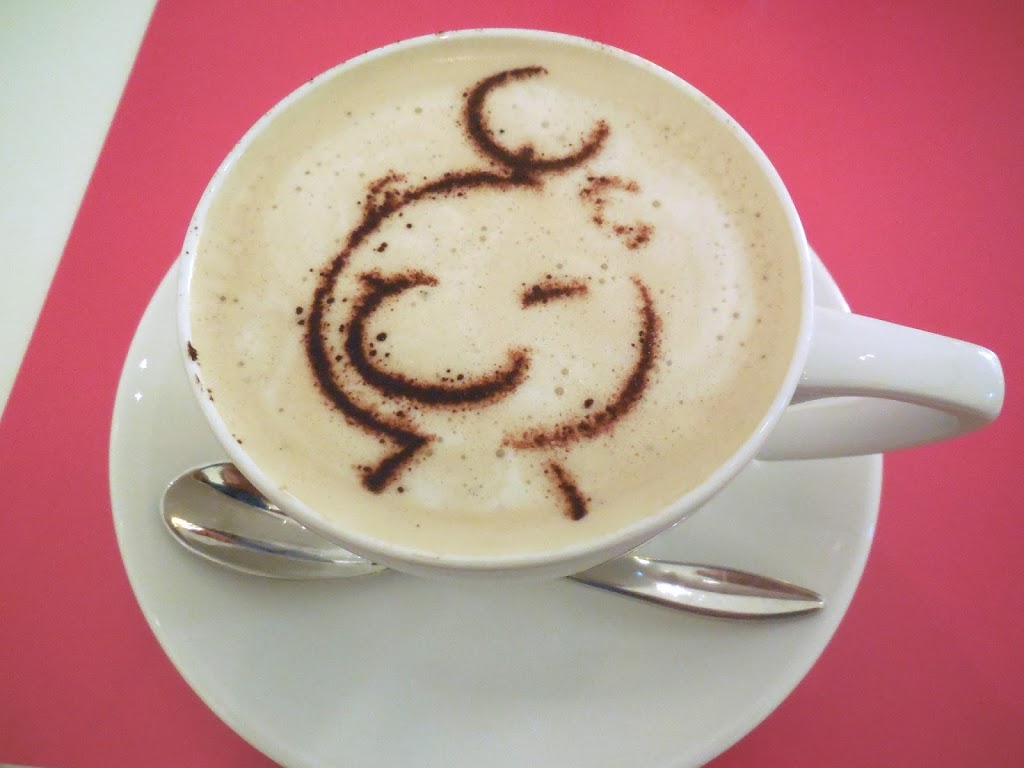 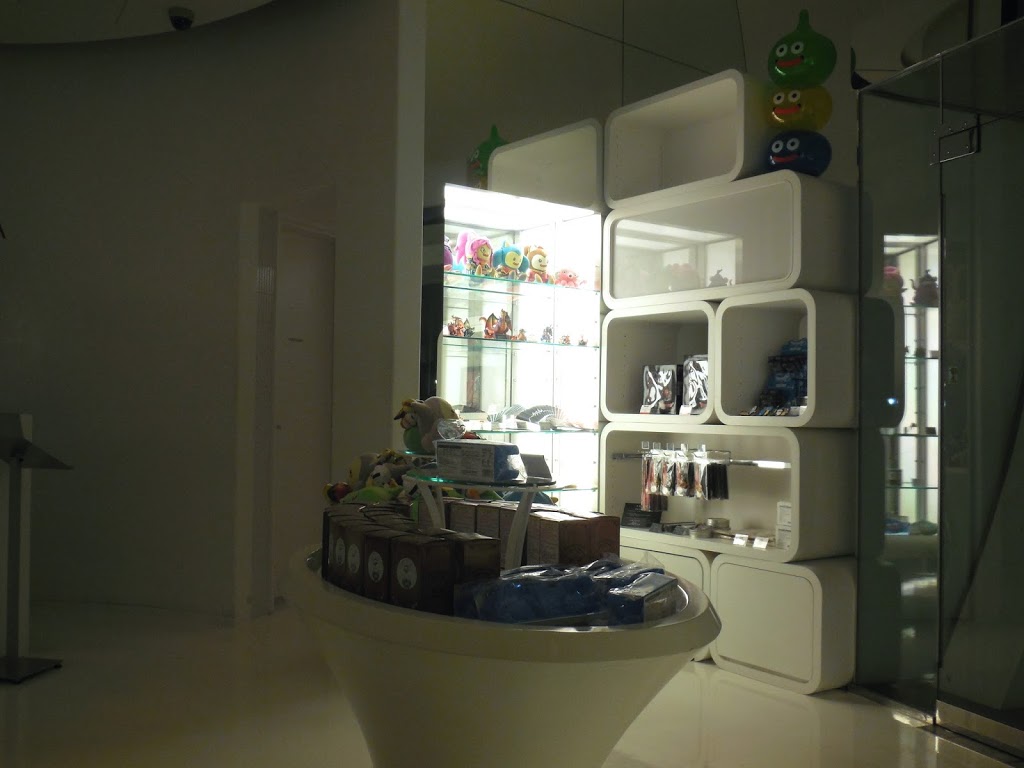 After finishing our meal, it was time to get shopping! Please forgive the general lack of photos of inside the café itself – again, the poor lighting combined with my little point-and-shoot camera didn’t make for the best photography. Hopefully you can get an idea from the above photo what the layout of the shop was like. Overall, it was very white, modern, and pristine!
I was slightly disappointed by the selection of the shop, simply because there weren’t very many exclusive items, which is what I’m after when I go to a themed café. They did have some amazing keychain replicas of iconic dishes from the café such as the chocobo pancakes, but they were a whopping $18! On one hand, I still regret not buying one, but on the other, $18 is just too much! In the end, I walked away with just one item, this Artnia-exclusive CD as a souvenir for Mr. Sushi: 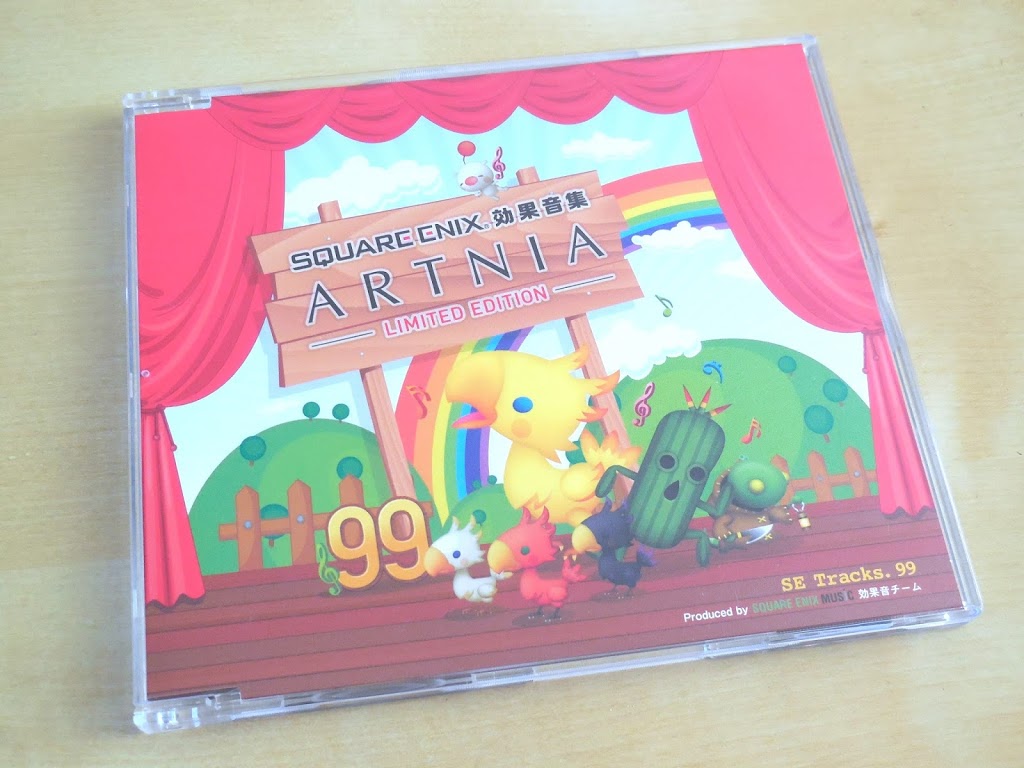 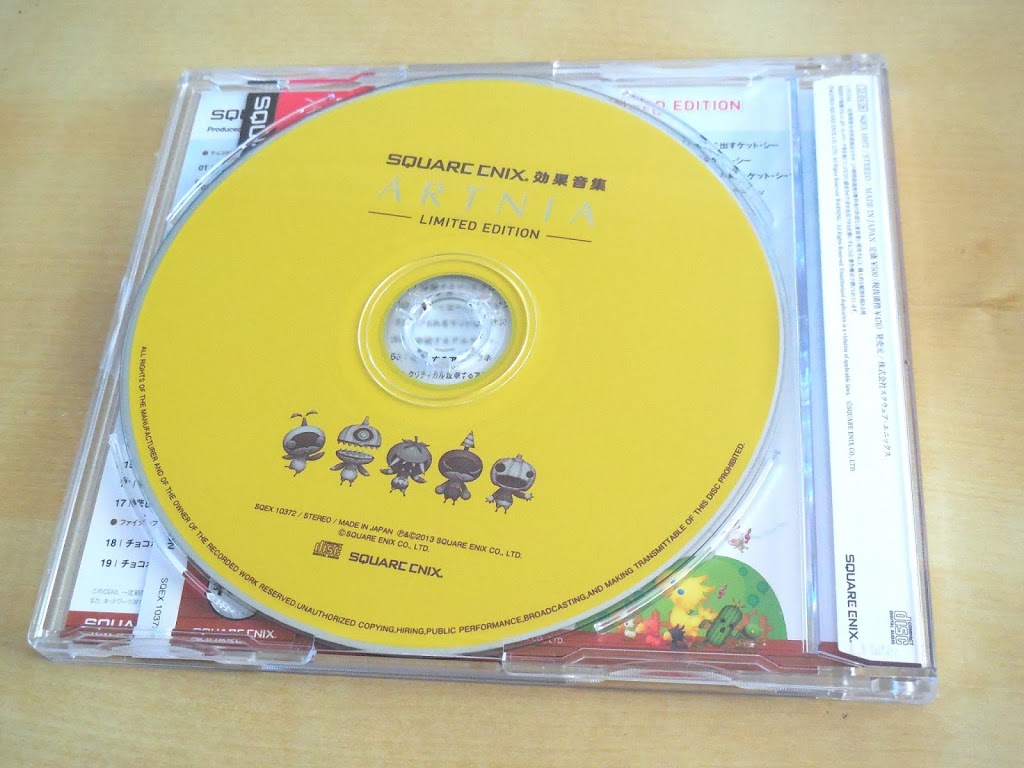 The CD is called SE Tracks 99, and as the title states, it consists of 99 tracks. At only $5, I wasn’t really sure what to expect, but it turns out it’s a collection of in-game creature sound effects, from chocobos to moogles and all oddities in between. Each track is only a second or two, so it’s not really something one would listen to for fun, but I still think it was a fun little souvenir! 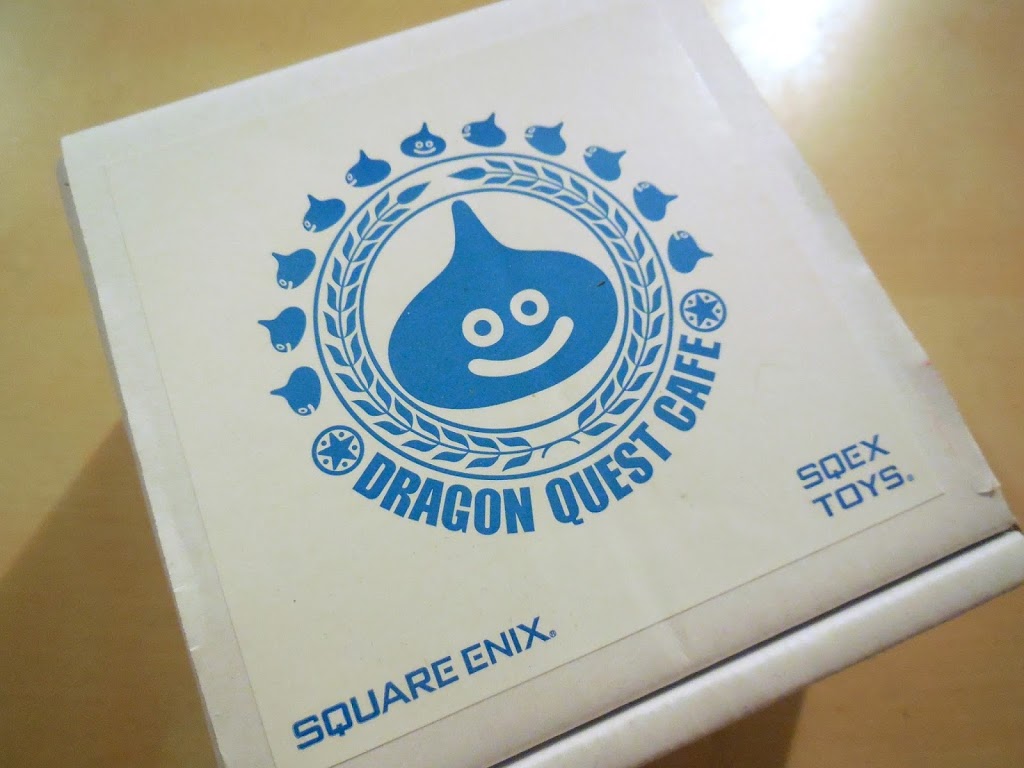 Finally, it’s time to take a look at the slime cup that came with my crème brûlée! Here’s the adorable box it came in. As you’ll see shortly, the parts of the above design are replicated on the cup itself. 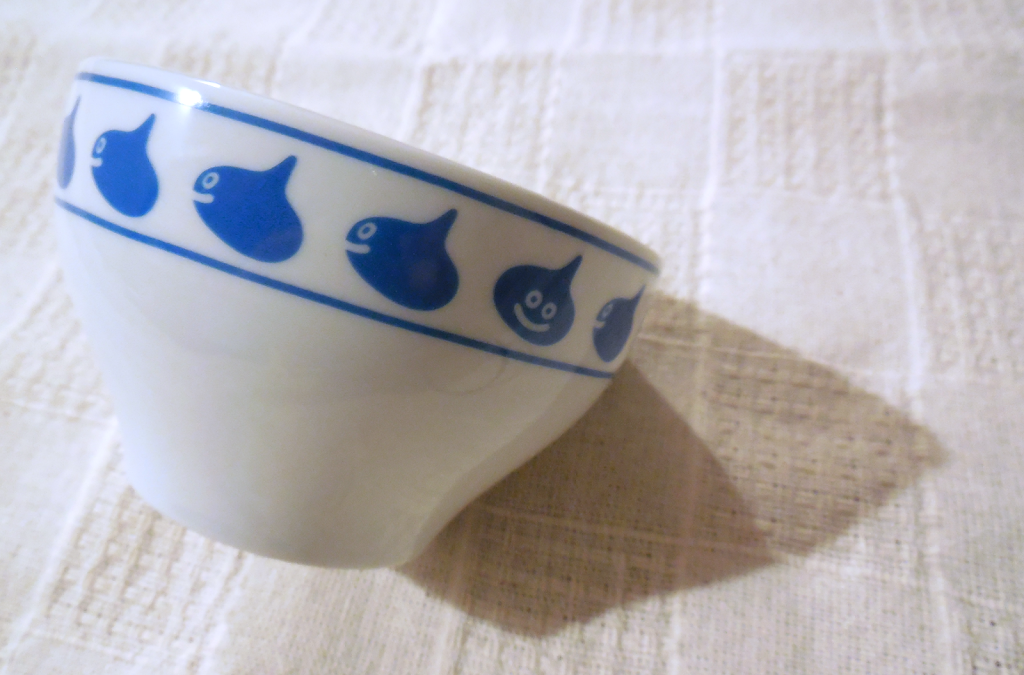 It was really hard to get a good photo of the outside, but here it is! I just love the little slime border pattern. Check out that smiling slime in the middle! It’s such a cute little detail. 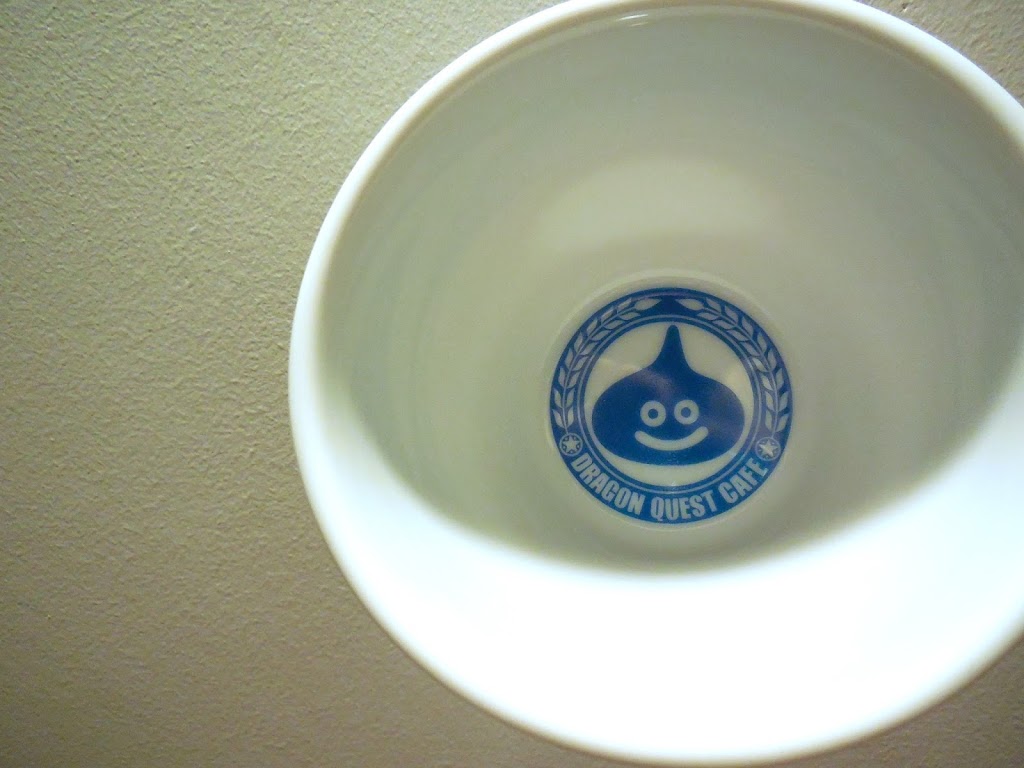 And here’s the bottom of the cup! I love when there’s a little surprise like that inside. It definitely puts as smile on my face to see the little slime staring up at me when I finish off a good cuppa.
I think it’s probably already pretty clear, but I had an amazing time at Artnia! Though the store lacked in affordable exclusive goods to purchase, it definitely made up for it in the amazing selection at the café. I’d definitely make it a priority to stop by if I’m ever in Tokyo again… I still need to try those pancakes!