I have many eccentric hobbies, but I don’t think I’ve ever quite let on about just how obsessed with stationery I am. My theory is that for someone who likes cute things from Japan, stationery is one of the cheapest and most easily accessible ways to get your kawaii fix. Whether you’re into character good such as Sanrio or a popular anime series, there’s no end to the notebooks, stickers, and other paper-based goods available! 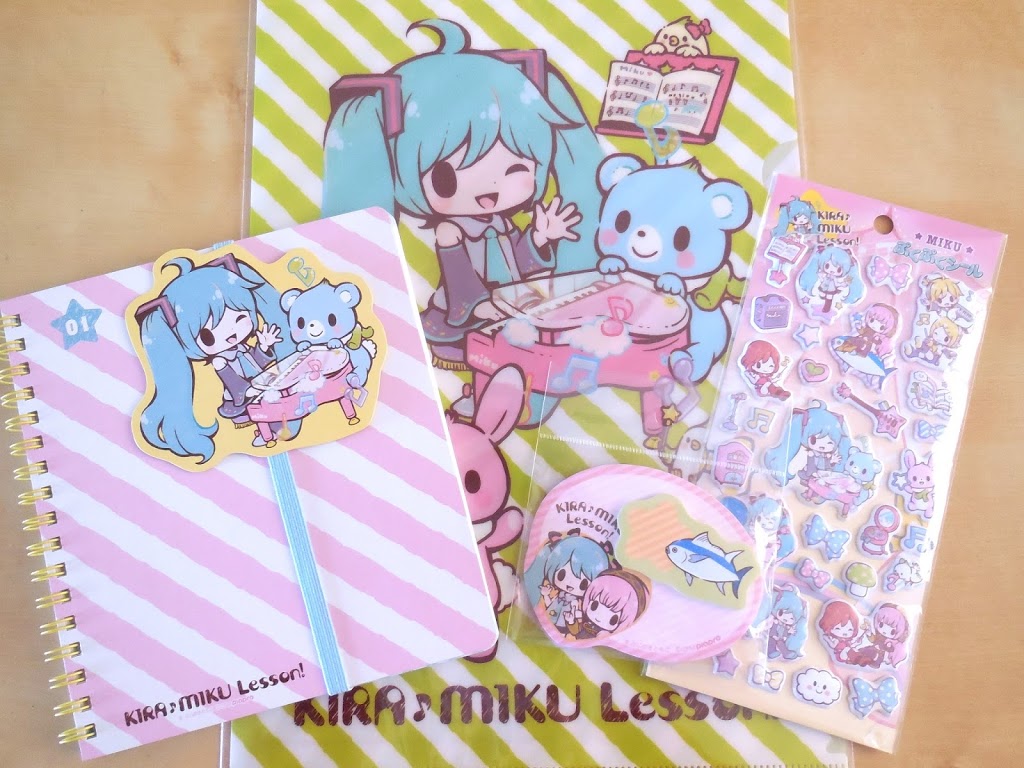 It’s no secret that I’ve been a little bit obsessed with Hatsune Miku/Vocaliods recently, so when I saw the above stationery series, I knew I needed one of everything. The Kira Miku Lesson series marries Miku and her Vocaloid pals with a lovely pastel palette, rabbits and bears, and a variety of musical instruments. All of my favorite things! 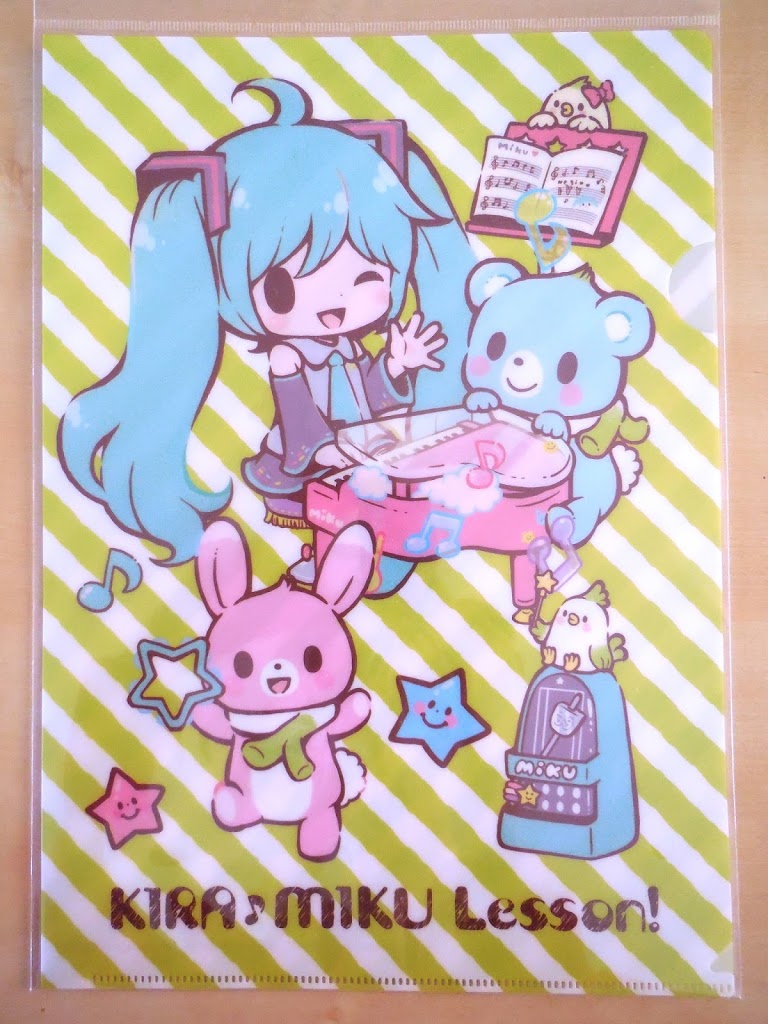 First up is this adorable Hatsune Miku clear folder. I don’t even want to get into how many of these folders I have, and the sad fact is that I barely ever use them. But you can’t deny how cute this one is! Sometimes I just display them on my wall when I don’t know what else to do with them. 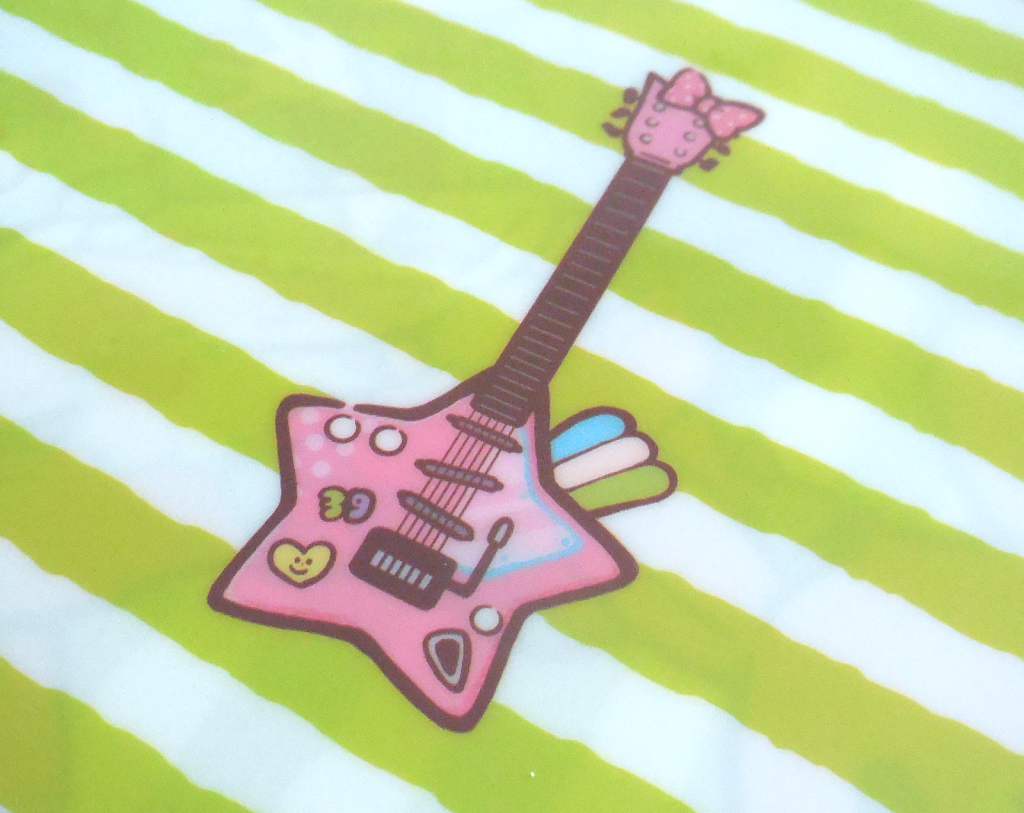 The back is plain aside from this fun little electric guitar. I love all the little details like the bow on its handle! 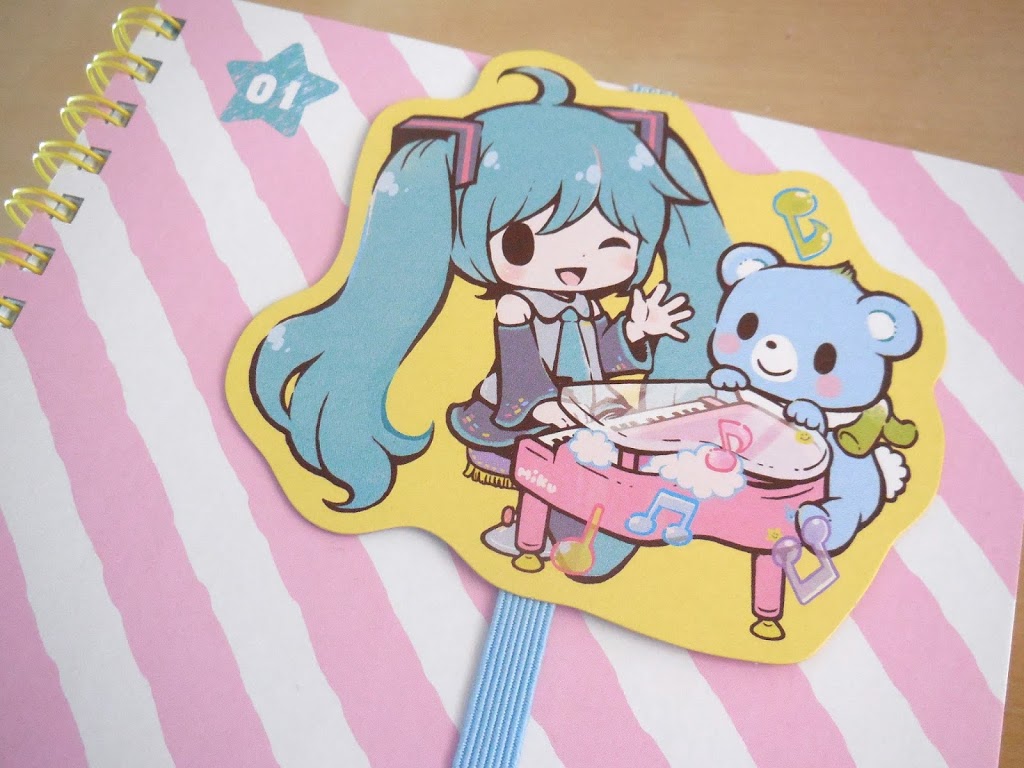 One can never have too many notebooks though, right? As you can see, this has the same central Miku design as the folder above, but for some reason I had to have it. It’s a bit of a shame that aside from the cardboard design attached to the band that goes around the notebook, it’s actually pretty plain. 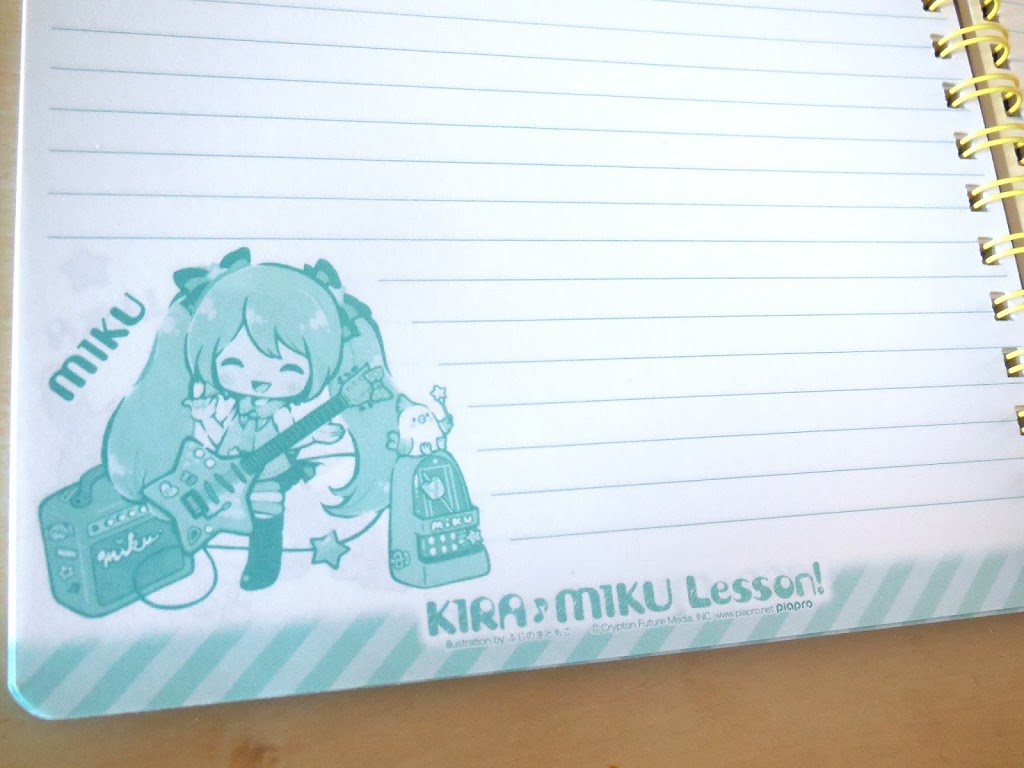 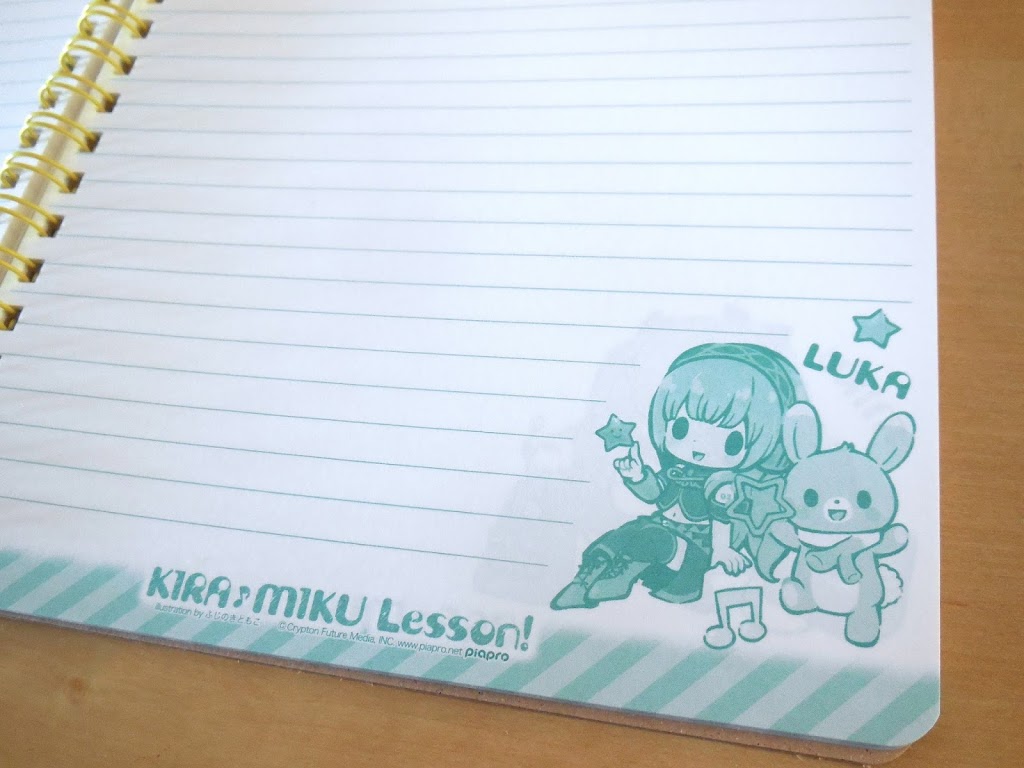 But wait, the pages inside have two different Vocaloid designs on them! That totally redeems this notebook in my eyes. There’s nothing I hate more than a notebook with a cute design on the outside that just has plain pages on the inside. Of course, though, that makes me not want to write in it for fear of “ruining” it… 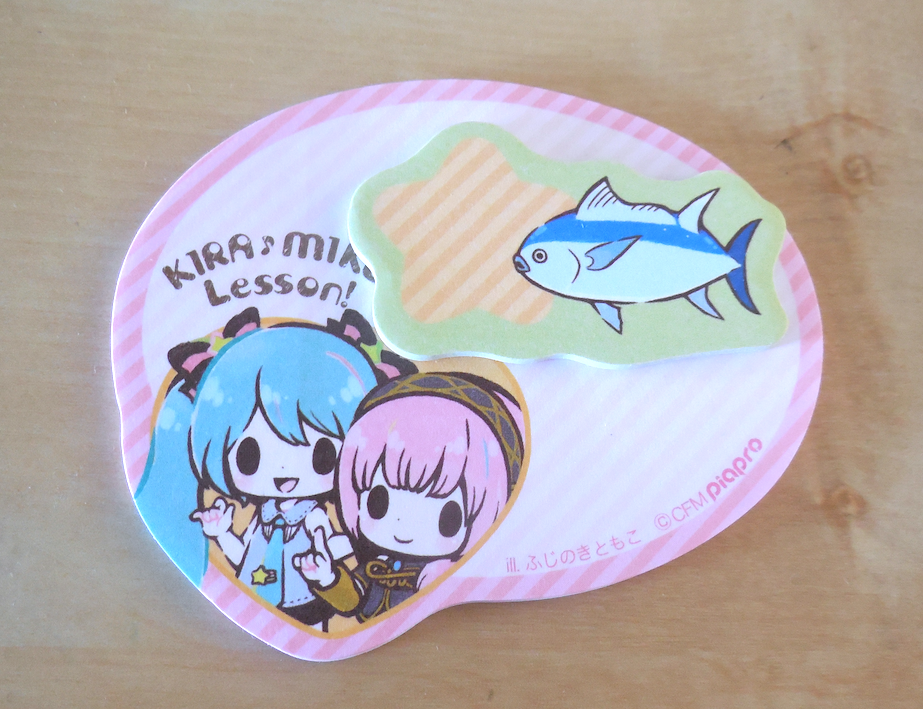 Now, sticky notes aren’t nearly as common as notebooks and folders, so this was a really fun addition to my Miku stationery shopping spree. I’ll tell you right now, out of all the available sticky note designs, I chose this one solely because of the fish. I’m not sure why they stuck the smaller sticky notes to the larger ones, as if/when I want to actually use them, I’ll ruin the first pink sheet featuring Miku and Luka when I go to remove the fish ones. A small caveat, but it’s still a shame! 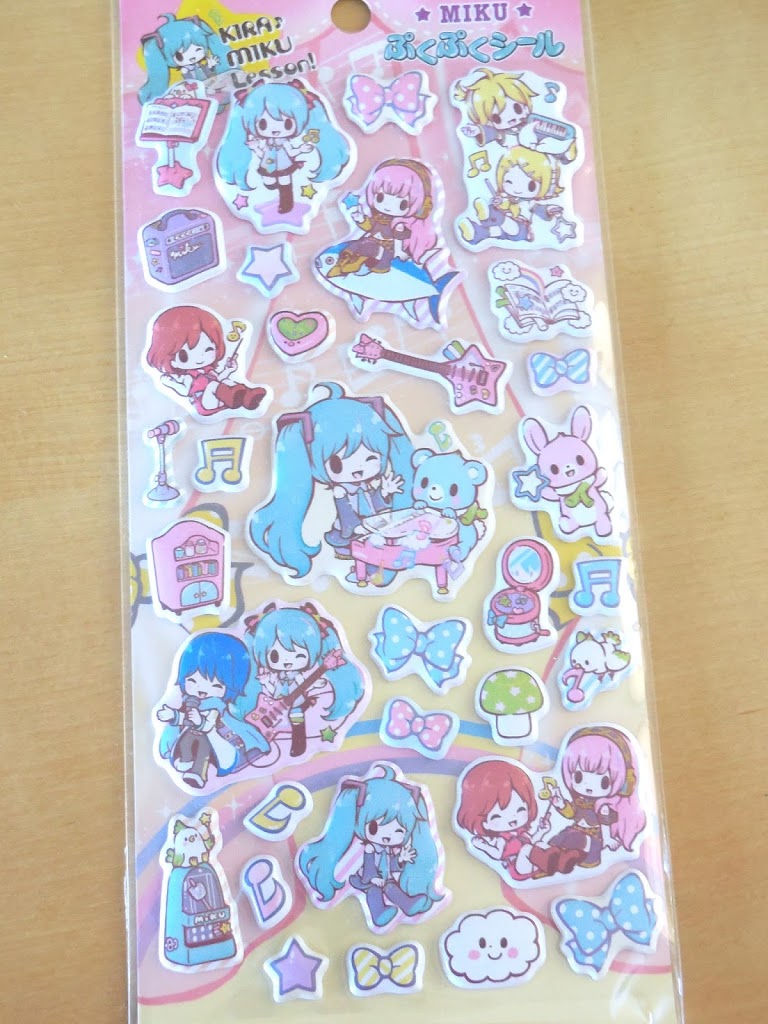 Finally, who doesn’t love a good sticker? These stickers are especially fun they’re “squishy,” which basically means I have absolutely no idea what to put them on. 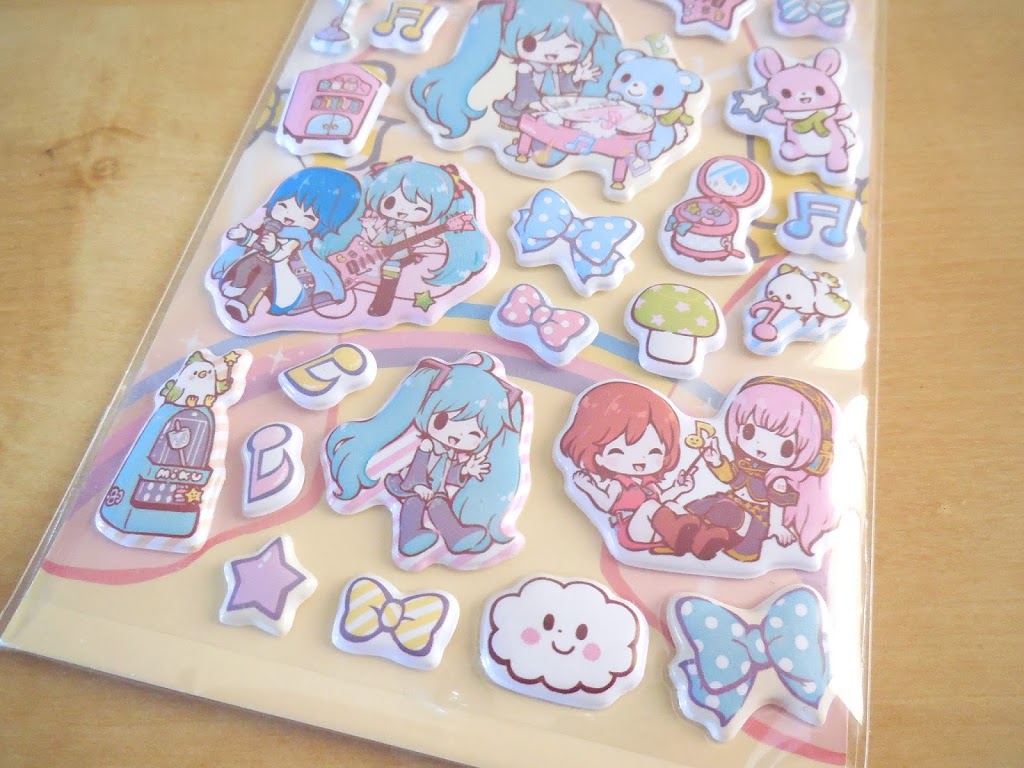 If you’re anything like the crafter Frainyxo, though, you might use these stickers to create resin charms! I hate the idea of “wasting” cute stickers like these, so when I saw she made an adorable heart-shaped charm featuring the dancing Miku at the top left of the sticker sheet, I knew I had to have it. Now I can stick these stickers on various things to my heart’s content and sleep soundly knowing I’ll have at least one of them for the long-term. 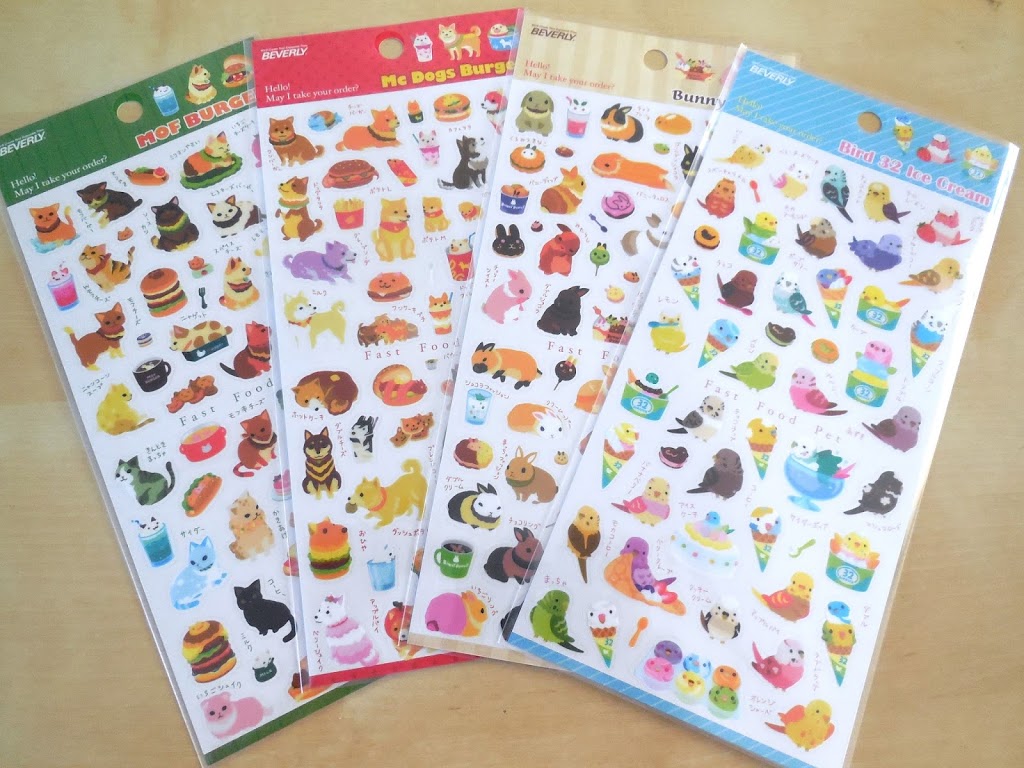 Next up are these utterly amazing food animal stickers I got in Japan last June but never got around to writing about! And you can bet your betting object of choice that, nearly a year later, not a single sticker is out of place. It’s sad, really, the life of a collector…

The great thing about having a scanner in this modern age, though, is being able to scan in things like stickers and save them forever. Am I starting to sound creepy yet? Seriously, for unique things like these, I can’t bring myself to actually use them until I’ve “catalogued” them in some way. The idea of sticking one on something and “ruining” it forever is too much to bear!

More importantly, though, how awesome are these stickers?!

Bird ice cream! I love how each series is a spoof on different famous fast food chains. Can you guess them all?

If I had to pick a favorite, it would probably be the Bird 32 Ice Cream, but the bunny donuts are also great! Who am I kidding, they’re all adorable. And would you believe each sheet was only $1? Talk about a steal!

I’m curious, do you like seeing pictures of my stationery? I certainly have a ton of it, so if that’s something people would like to see more of, I can certainly oblige! It would definitely be the motivation I need to scan in more of my collection…