Anyone who’s following me on Twitter is probably well aware that I’ve gotten in a little, how should I put it, deep into Monster Hunter over the past couple of weeks (I blame MonMonth!). Just how deep, exactly? Well, I ordered this: 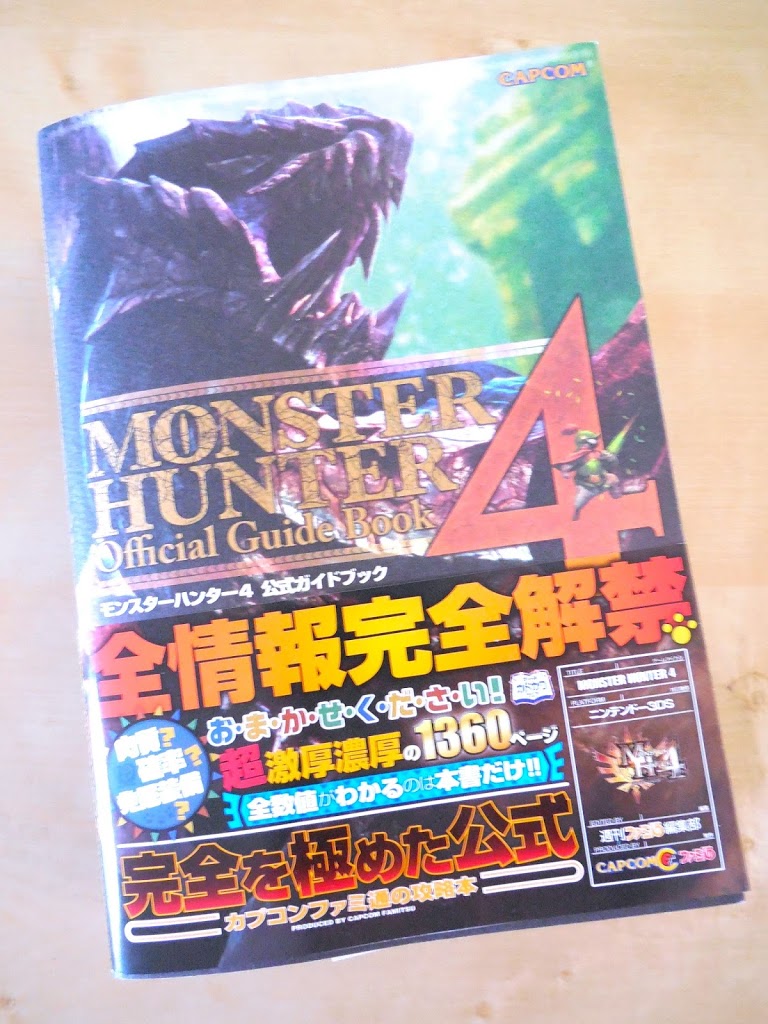 While there are countless in-depth Wikis and guides to Monster Hunter 4 online, I couldn’t help but want a physical book that I could refer to for weapon upgrades, monster battling strategies, and, of course, sweet screenshots of all the armour and gear in the game. I was very impressed by the Animal Crossing: New Leaf guide I was gifted a while back, so I figured why not spring for another awesome, comprehensive Japanese game guide? 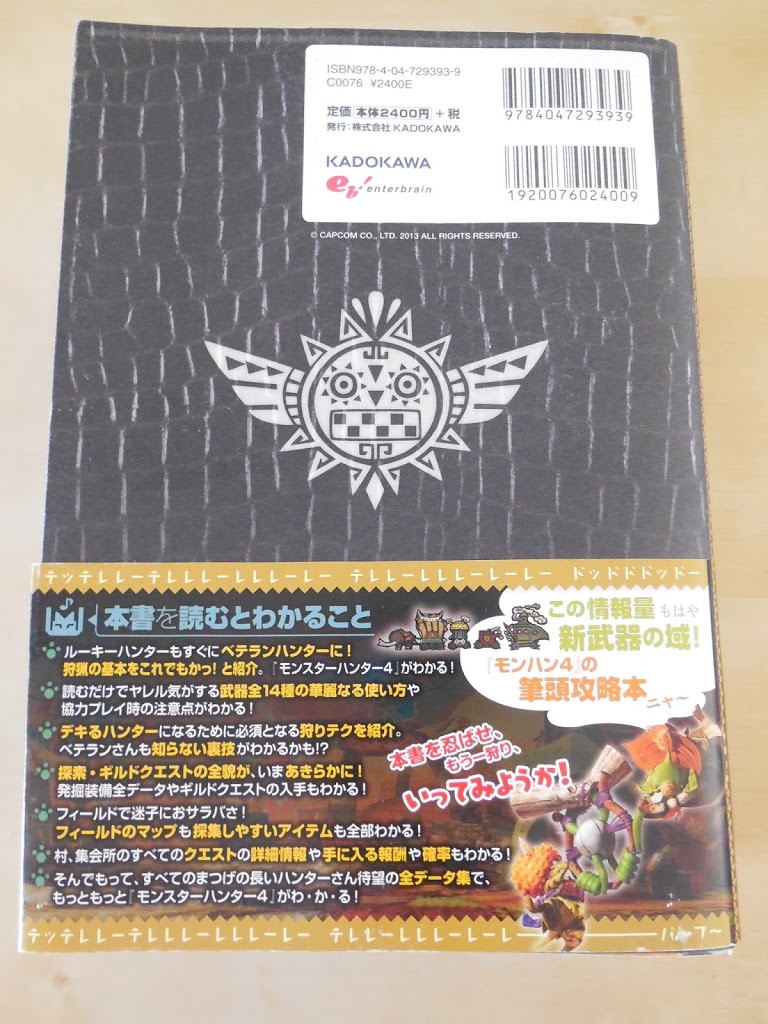 The full title, by the way, is the Monster Hunter 4 Official Guide Book by Famitsu. I’m told it’s the most comprehensive guide available, and it was just released in January of this year. The back cover is simple, yet they manage to pack in quite a bit of info on the obi (extra flap of paper that folds around the bottom)! 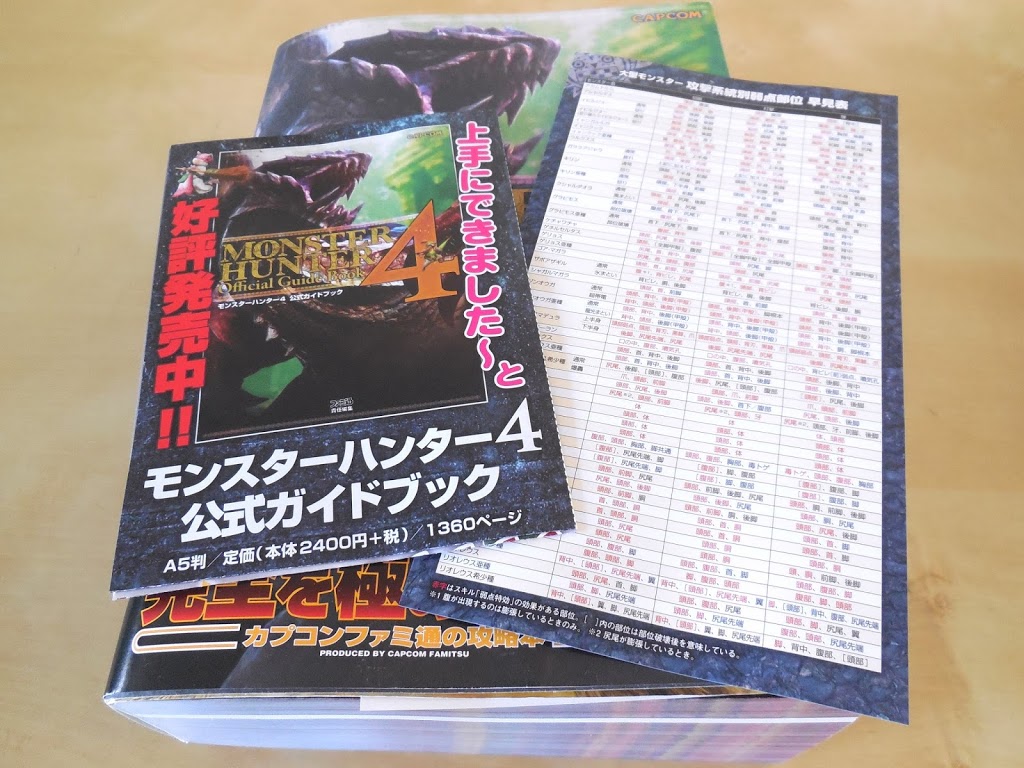 The book also comes with these two quick guides for “easy” reference when out in the field, I guess. I’ve already used the map with gathering point locations a couple of times. Inside the front jacket is a list of key quests, as well. Handy! 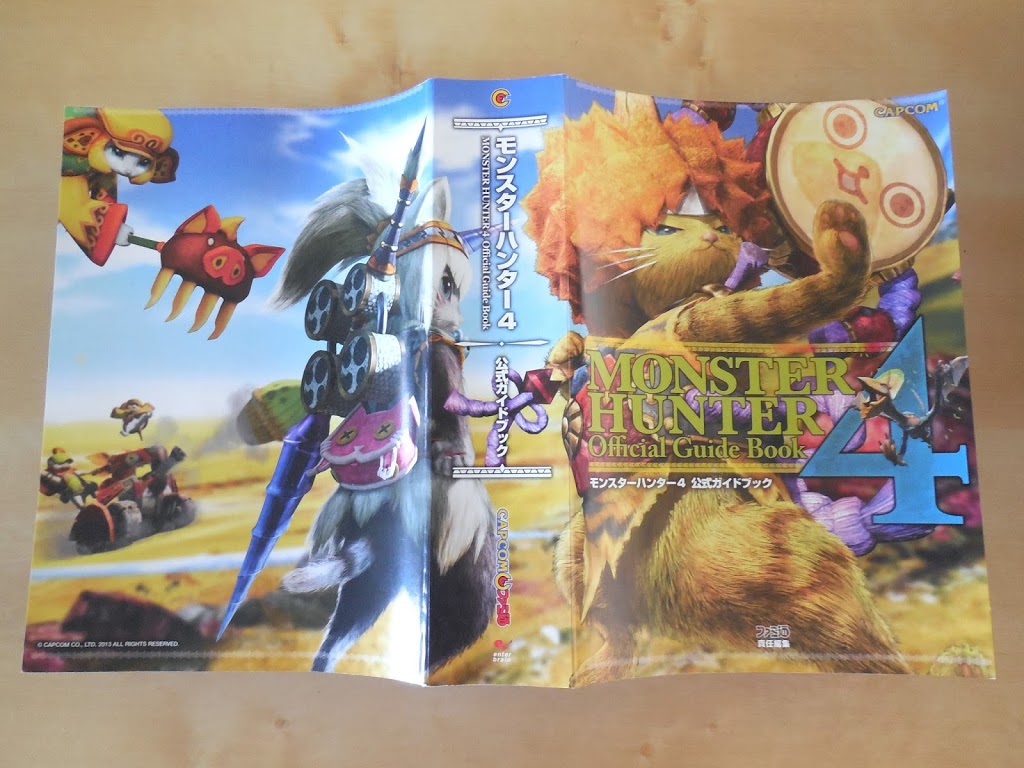 And when you take off the slip jacket… an adorable Felyne illustration is revealed! All of the outfits they’re wearing are armour sets you can get for your Felyne companions in the game. 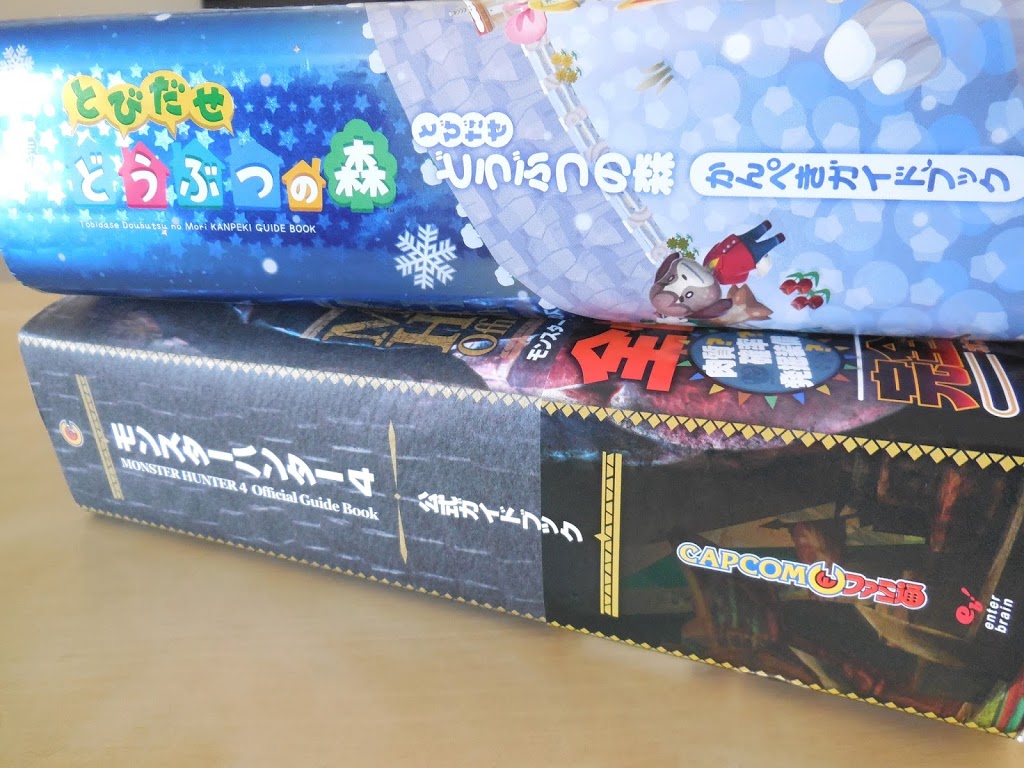 The book itself is actually a whopping 1,380 pages, which makes it more than twice as big as my Animal Crossing: New Leaf book! The pages are much thinner, though, so size-wise it’s not significantly bigger. 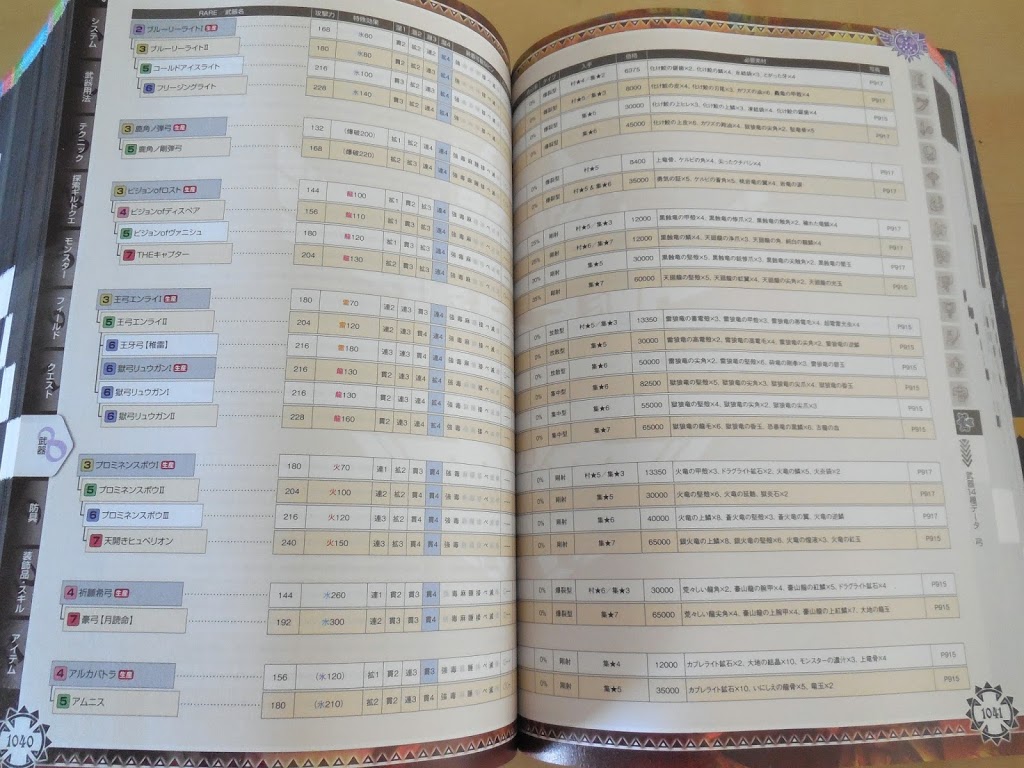 If you buy this book looking for lots of pretty pictures, you’re probably going to be sorely disappointed. There are literally pages and pages of stats like the one above! This just shows some weapon upgrade trees and their stats, along with the items required to craft them. Page numbers are provided so it’s not hard at all to flip through and find where the items can be obtained. 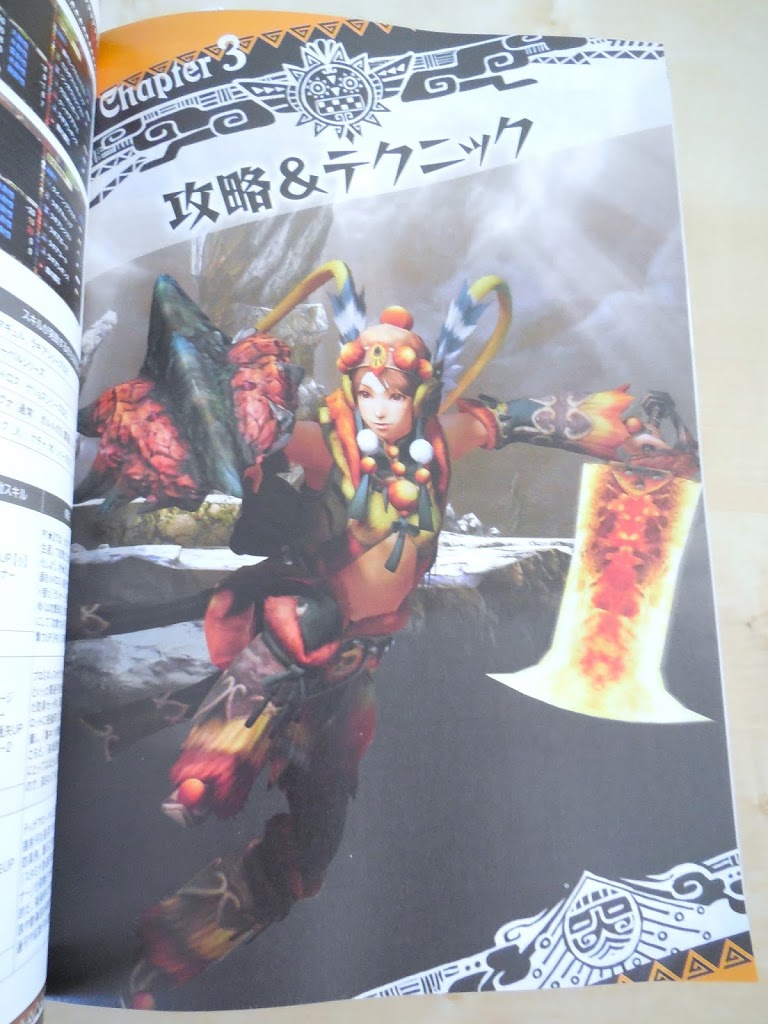 The chapters, luckily, are broken up with some nice images such as the one above. It’s just too bad there aren’t more than them! Oh well, I shouldn’t have expected an art book. 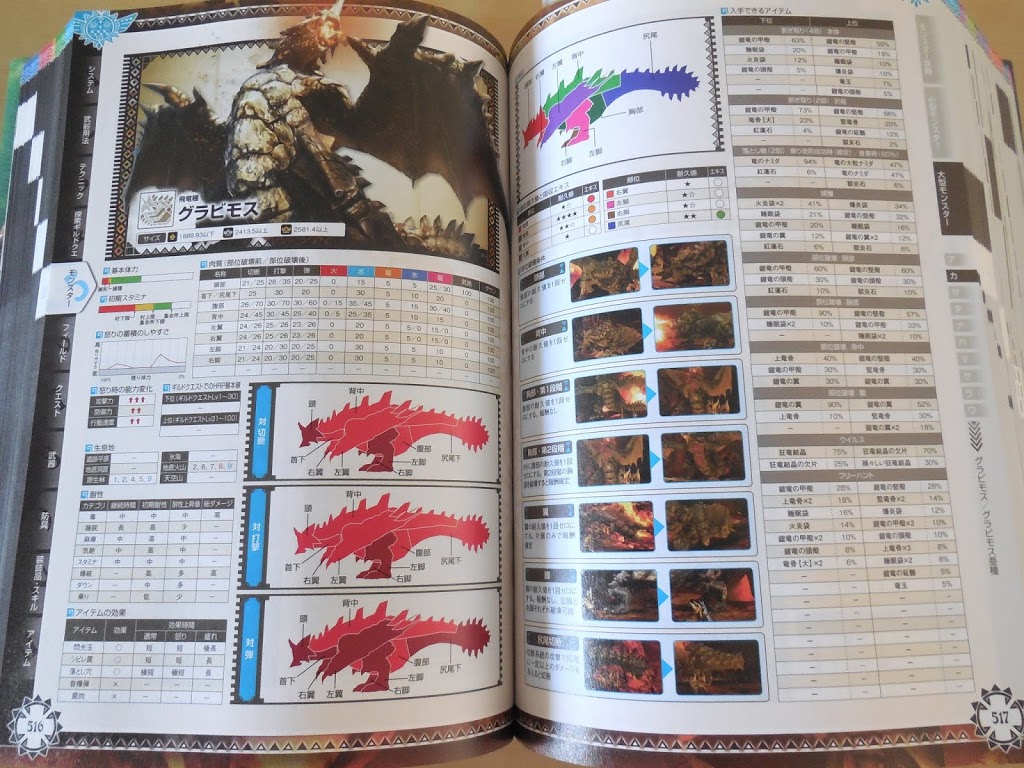 Ok, I’m going to complain a little bit more (don’t worry, I really do love the book!): I wish they had better pictures of the monsters, too! But once again, I can tell they’re trying to fit as much information as they possibly can into the book. I love how they detail all of the monster’s different attack patterns and how you should fight them. Perfect for the diagram lovers out there! 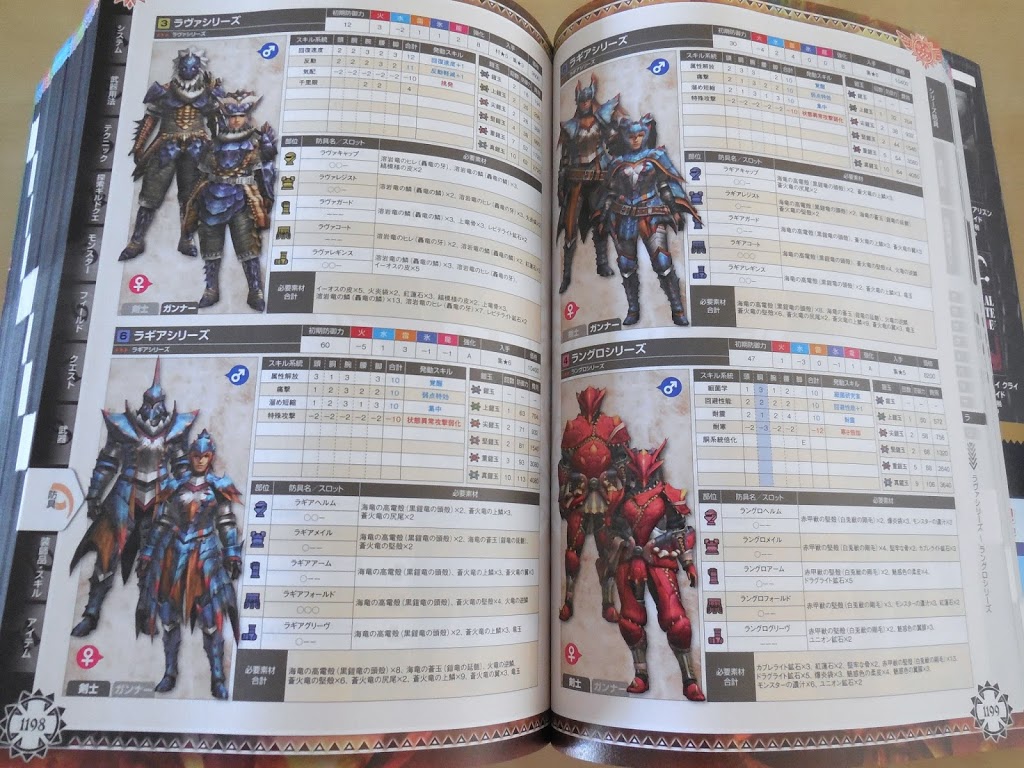 Now this is a little more exciting for those who don’t just want to look at numbers and kanji: armor sets! I always have to check to see how a set looks here before I craft it, because who wants to go into battle donning an ugly set of armour? 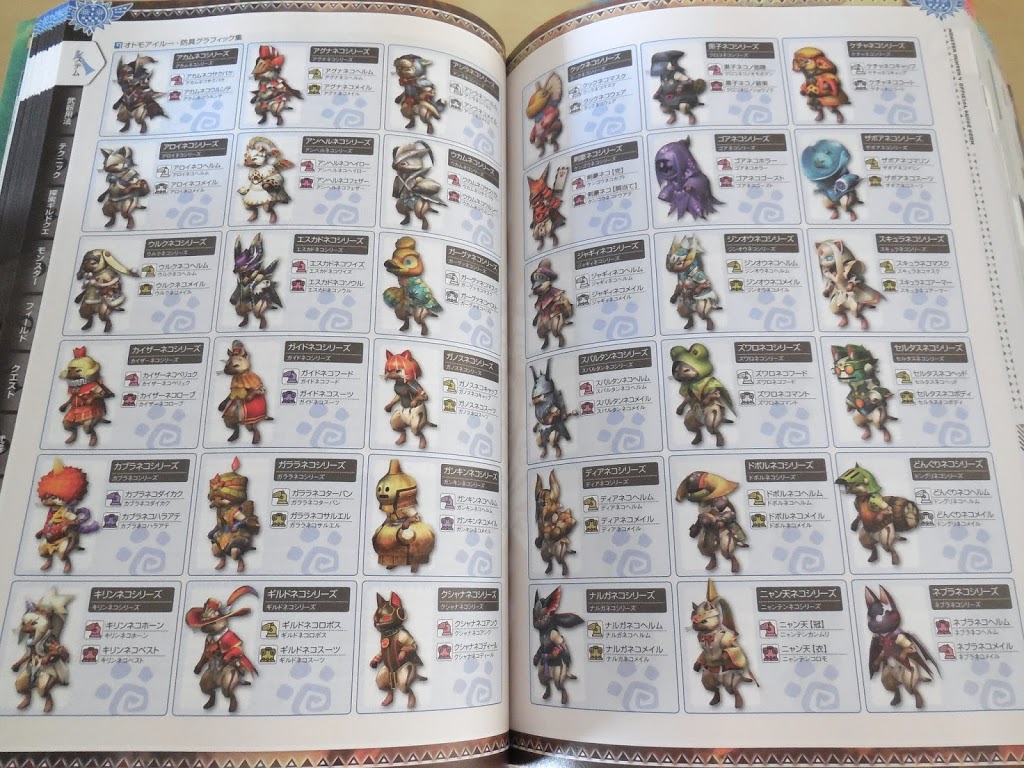 And finally, my favourite section – the Felyne armour! I just love checking out all the different outfits! One of my Felyne sidekicks is wearing the Yian Kut-Ku fursuit on the top left corner of the right page. Cute!

I can tell I’m going to be using this book for quite a long time, especially since I’ve already clocked more than 70 hours into Monster Hunter 4! If you’d like to get your hands on one, they can be ordered for only $23 at CD Japan and other online retailers. 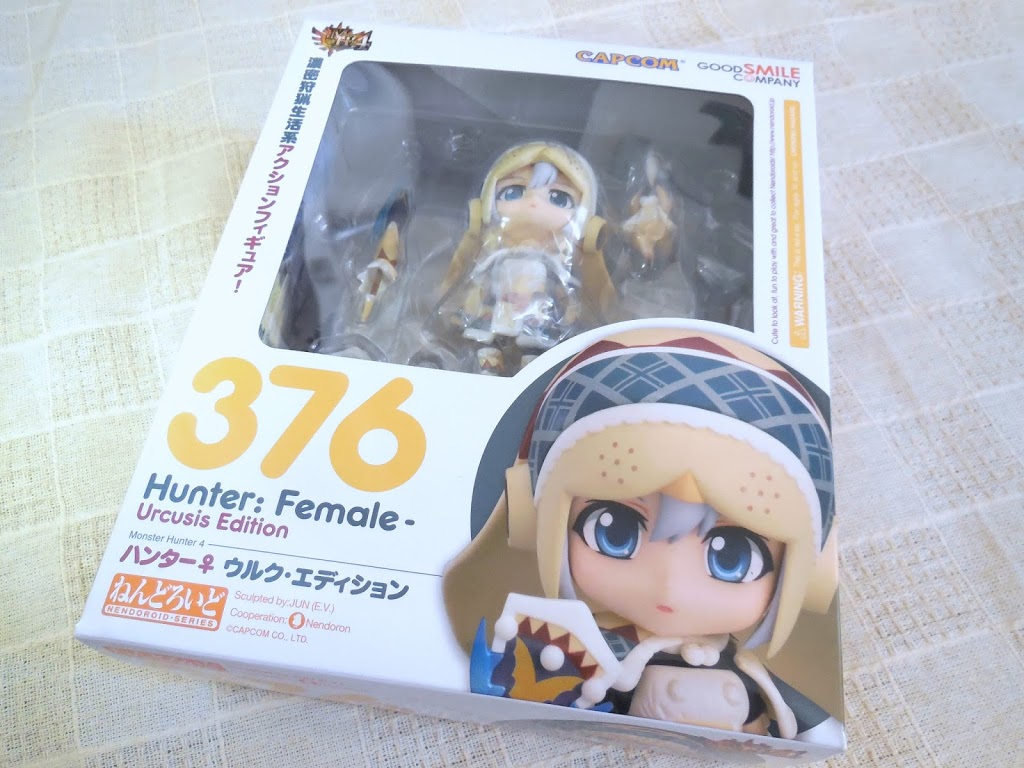 Another Monster Hunter-related item I received just the other day is something I preordered way back last year… the Female Hunter: Lagombi Edition! The Lagombi armour set is undoubtedly my favourite set so far, so as soon as she was announced I scrambled to place a preorder. 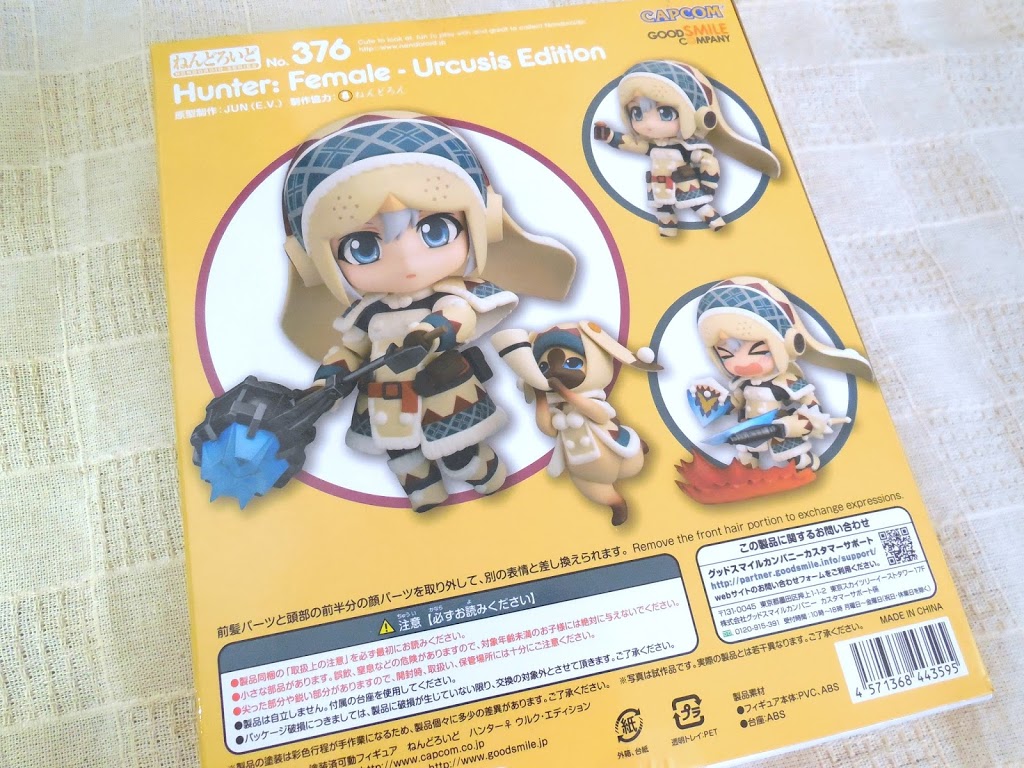 I forgot she actually comes with two weapons – a gunlance and a hammer! Since my main weapon is a hammer, I have to admit I was pleasantly surprised by this revelation. She looks so much like my own character in the game! 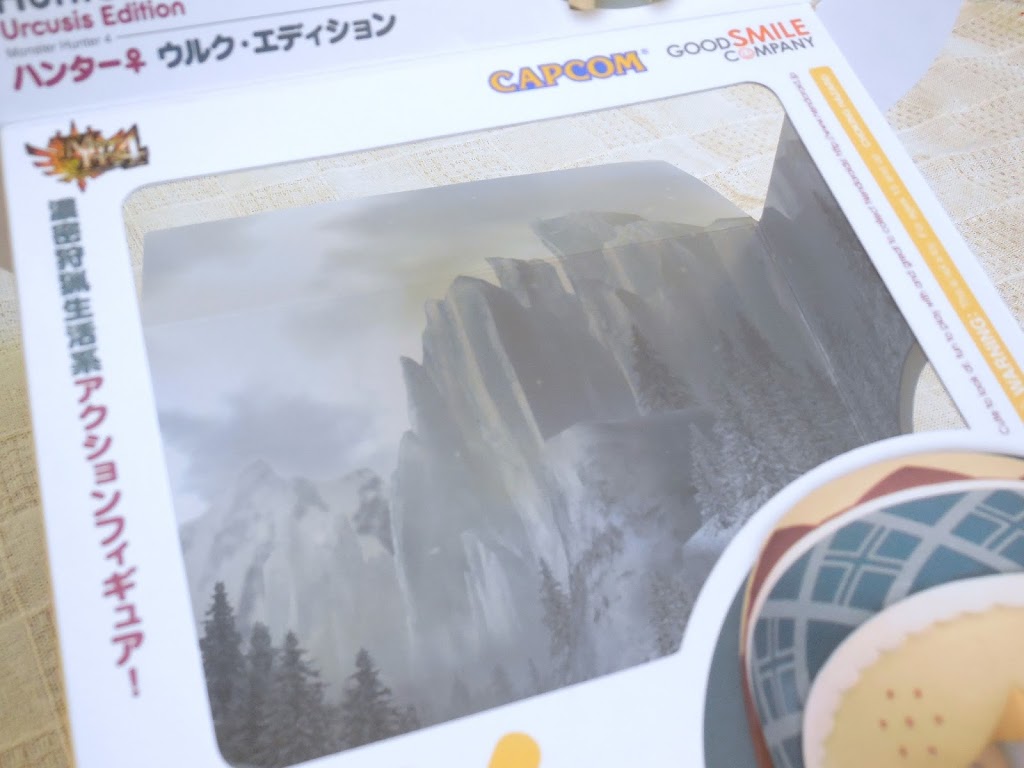 Before I get to the real good stuff, I just wanted to note that I think it’s a very nice touch that Good Smile Company added a winter mountain scene for the background. It’s separate from the box, so you could potentially use it as a backdrop yourself. 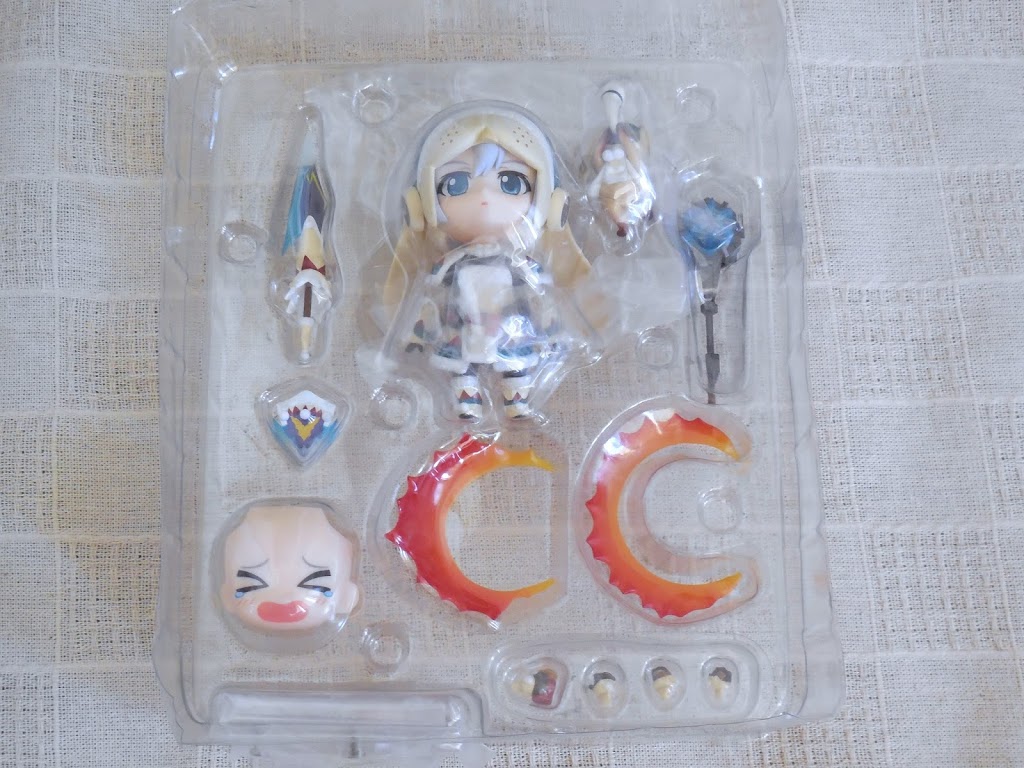 Here’s what she looks like just out of the box. I absolutely love that they included a Felyne companion along with the two different weapons. I’m not as happy about her facial expressions… It would have been nice if she got one more, or at least something different from her blank main expression and her tearful freaked out face.

The red things are called “action parts” and are supposed to help you simulate battle scenes. I assume one is supposed to be used with the hammer and the other with the gunlance, but I can’t help but think they’re extremely similar and I could’ve probably done with just one. Oh well! 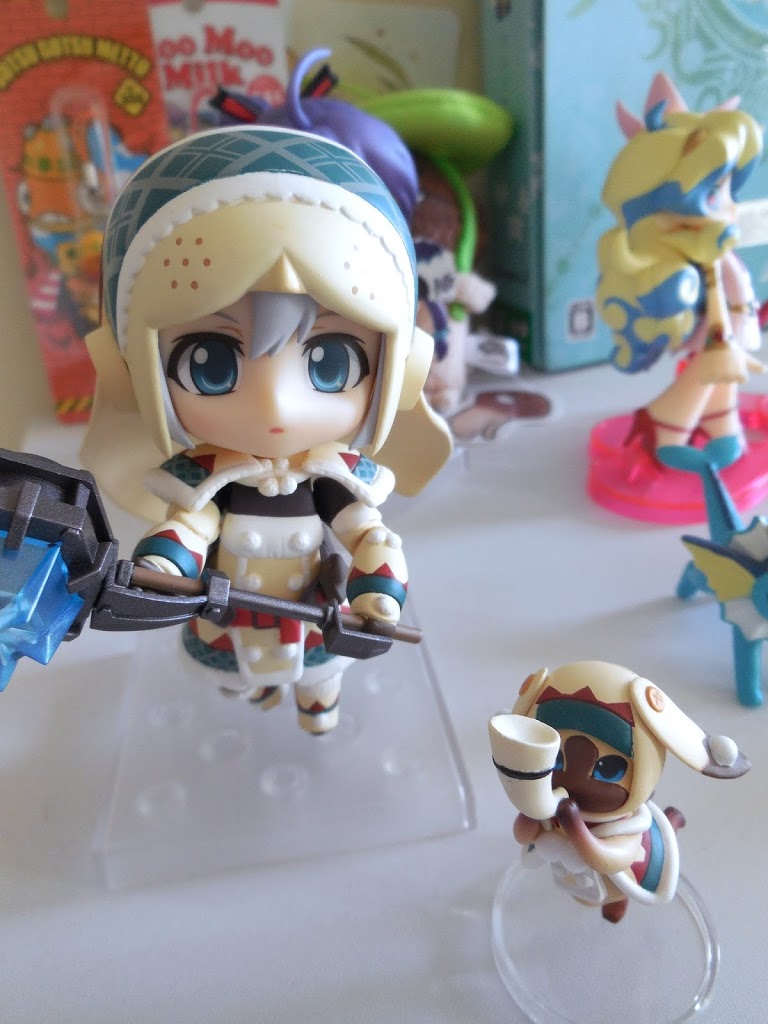 And here she is all set up on my shelf with her Felyne companion! I still think her outfit is the best thing about her, but it’s a cute Nendoroid all in all. I’ve done a full video review if you’re interested in seeing more:

You can order the Lagombi Hunter Nendoroid at Jlist, CD Japan, and Ami Ami.

This is so pretty! I would kill to play a FFIX remake in this style 😭😭

I started playing Raging Loop on Sunday and now I know exactly what @thegaygamer meant! I can’t put it down! http://www.thegaygamer.com/2020/02/can-i-still-call-raging-loop-one-of-my-favorite-games-of-2019.html