Happy New Year! By now I think it’s safe to say that I’ll be doing tutorial/impression posts for all of the special events in Final Fantasy XIV: A Realm Reborn, and what better way to ring in the new year than with a special in-game event? Since this was my first time taking part in the Heavensturn festivities, I was excited to see what was in store for the quest line. 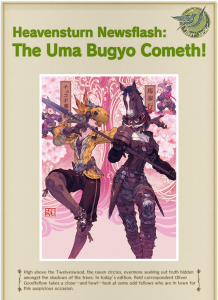 Just looking at the Lodestone promotional art for the event, it seems that chocobos are involved in some way. This year is themed around the horse (uma), 2014’s animal according to the Chinsese zodiac. Of course, that goofy horse helmet, or kabuto, is the main attainable item.

Here is the complete list of rewards from the official Lodestone page that will be attainable until the event ends on January 14th. Square Enix is kindly offering past years’ zodiac-themed kabuto, as well! Great for those like me who only started playing FFXIV with the release of A Realm Reborn and enjoy collecting the seasonal items. 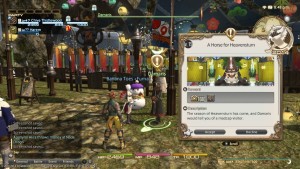 Unlike the Christmas event that had FATEs near each of the three main cities, Heavensturn is a specific quest line that can only be activated by speaking to Damaris in Old Gridania. Also, the quests are all level 15, which is great for folks with lower level characters, and you don’t have to worry about reaching a higher level to complete it before the deadline like I did with the Lightning event. 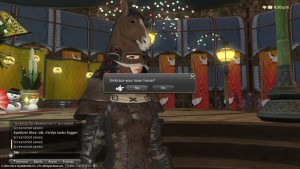 After speaking to Damaris, you’ll simply need to walk a few more paces to Uma Bugyo to embrace your inner horse and complete the first quest in the event, “A Horse for Heavensturn.” This nets you the extremely posh Uma Kabuto, which you’ll want to keep equipped for a while – you’ll need it for the duration of the next quest. 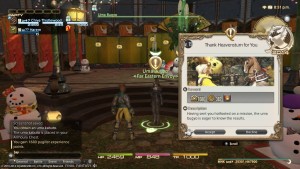 Completing the first quest should immediately unlock the second quest in the event, “Thank Heavensturn for You.” Speak to Uma Bugyo again to undertake her mission of spreading the glory of the horse throughout Eorzea. Get ready to do a lot of traveling, as this quest requires you to go to all over the map! 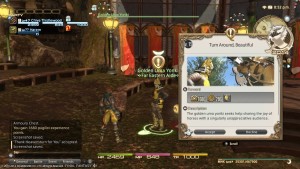 To get the first of the three colored Uma Kabuto, speak to Golden Uma Yoriki standing next to Uma Bugyo. After accepting the quest, you’ll be directed to Bentbranch Meadows to demonstrate the beauty of the majestic horse. You’ll find Golden Uma Doshin there at X:21, Y:21 who will ask you to pose for and rally some nearby chocobos. 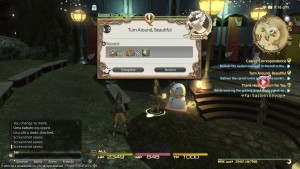 Complete the required tasks and Golden Uma Doshin will reward you with a Majestic Carrot, which you then need to bring back to Golden Uma Yoriki in Old Gridania for the Golden Uma Kabuto. Put it on and speak to Uma Bugyo to activate the next part of the quest! 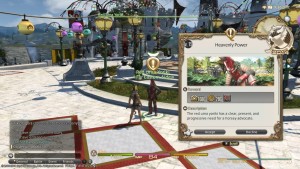 Hop on an airship to Limsa Limonsa (or teleport, if you’ve got gil to spare) and head to X:11, Y:13 to speak with Red Uma Yoriki while wearing your Uma Kabuto (the original one, not the yellow one) to be sent you off on a wild carrot collecting chase to prove the might of the horse or somesuch in the “Heavenly Power” quest. I think I sense a pattern… 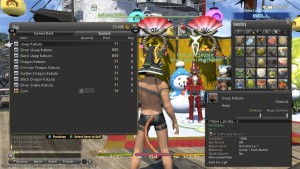 But don’t run off too fast! Located just opposite Red Uma Yoriki is is Red Uma Shonin, who just so happens to be selling the kabuto from past Heavensturn events, along with seasonal Zoni soup, so stock up if you’d like any of those items! You will receive one Zoni for completing the “Thank Heavensent for You” quest, though, so you can skip purchasing that if you feel you don’t need more than one. 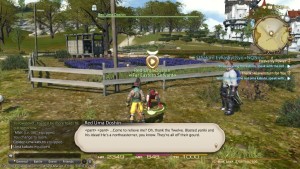 Next it’s off to speak with Red Uma Doshin in Lower La Noscea (X:30, Y:18), who gives you the arduous task of collecting some carrots for a local botanist. Your reward will be a… Lusty Carrot… which you can then bring back to Red Uma Yoriki for your Red Uma Kabuto reward. Then it’s back to Old Gridania donning your new Red Uma Kabuto to once again to speak with Uma Bugyo. 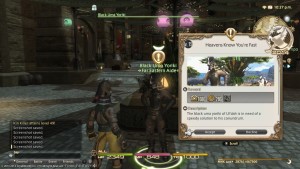 Finally, put that Uma Kabuto back on and hoof it to Ul’dah to see Black Uma Yoriki (X:10, Y:9), who wishes for you to demonstrate the blinding speed of the horse. Head to the Eighty Sins of Sasamo (X:28, Y:24) and you’ll find the first of four sets of markers you’ll need to run through to complete the quest.

By the time you reach Black Uma Doshin (X:15, Y:29), you should have completed the requirements to receive the Sleek Carrot. Bring that back to Black Uma Yoriki to collect your Black Uma Kabuto prize! Once again, it’s back to Old Gridania to show off that shiny new kabuto to Uma Bugyo.

If you were hoping that was all… well, it’s not! Now you need to convince more people in Gridania of the greatness of the horse (while wearing the Uma Kabuto, of course) along with the Chief Chocowacker, who thinks you’re off your rocker. When all that’s said and done and you’ve reported to Uma Bugyo, it’s off to the North Shroud (X:28, Y:28) to convince the Chief Chocowacker that horses are superior than chocobos. 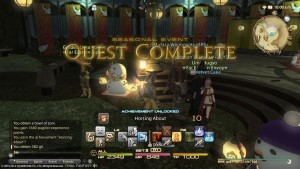 After watching the silly cutscene, return to Uma Bugyo’s usual spot in Old Gridania to complete the quest! You’ll even get a nice achievement, “Horsing About,” for your efforts, along with a bowl of Zoni.

And there you have it! At the beginning of the event I was very happy to have something different from the usual FATEs, but by the end of it I have to say I was a little sick of all the running around. That said, I rushed things so that I could do this post, and I can see completing it a little bit at a time as you happen to find yourself in those areas for other things a more fun way to go about it. However, the dialogue throughout the event was so cheeky and full of puns that I couldn’t help but have a smile on my face throughout! At the risk of repeating myself, I have to say Square Enix has got an ace localization team working on this one.

Finally, it wouldn’t be a FFXIV seasonal event post without a few photos! Here a a few of my favorites: 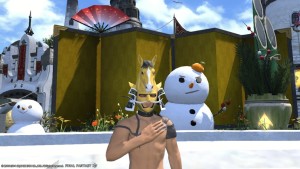 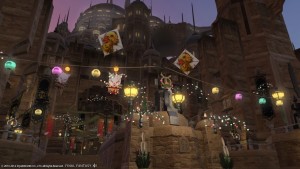 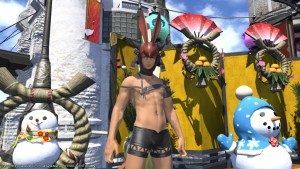 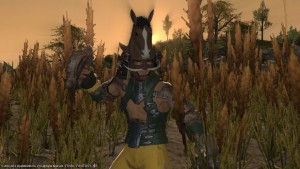 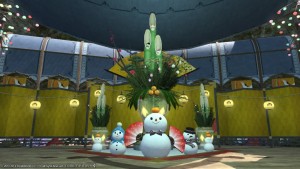