Now that 2013 has come and gone, I figured it’d be as good a time as any to reflect on the most memorable things that came out over the course of the year. Of course, it just wasn’t possible for me to play all the games and watch all the anime that came out in 2013, and I’m not really fond of definitively putting labels on things such as “game of the year,” so I’ll just stick with shining the spotlight on what stood out for me personally. To hear me talk more in-depth about some of these titles, be sure to check out my end-of-the-year podcast with Brad Gallaway, as well!

2013 was a great year for games, especially on handhelds. I think I played my 3DS’s more than any year previous, and my Vita got a fair share of love, too! Though the new consoles that came out at the end of the year mean a new generation of flashier games to play on the TV, I imagine I’ll be satisfied with my handhelds and retro hardware for a while yet. Here are a few of my favorite games I played last year:

Final Fantasy XIV: A Realm Reborn (PC, PS3) – I’ve written so much about this one already that I’m almost embarrassed to bring it up again! But considering how much time I’ve spent playing and thinking about FFXIV, it’d be criminal not to include it on this list. In fact, it blows all other games from 2013 out of the water for me. Not only was it my first MMO, but it’s the first mainline Final Fantasy I can genuinely say I loved since Final Fantasy X.

SteamWorld Dig: A Fistful of Dirt (3DS) – This little eShop game was, hands down, the biggest surprise of the year. When the developer contacted me to review the title for them, I initially scoffed at the name and thought, “Great, another silly western indie title.” Boy, was I wrong! I’ve never played Minecraft, Terraria, or even Metroid (hate mail commencing in 3, 2…), which SteamWorld Dig is often compared to, but I can say that it is a polished, addictive digging title that gave me major Mr. Driller vibes while still having its own cohesive style. And I’m pretty sure it’s the first eShop game I’ve played to completion! 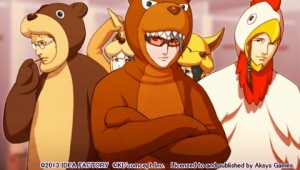 Sweet Fuse: At Your Side (PSP/PSN) – I can’t commend Aksys Games enough for continuing to bring over otome games in English. While their first pick, Hakuoki: Demon of the Fleeting Blossom was a solid game, it wasn’t really the kind of thing that jives with me (brooding swordsmen, blech), so Sweet Fuse was a very welcome addition to their otome game library. Suffice it to say, if you’re only going to play one otome game in your life, make it this one – it’s campy, humorous, and is chock full of fun video game-related nods and references on top of the organically written romances.

Monster Hunter 3 Ultimate (3DS, Wii U) – Not only was 2013 the year of my first MMO, it was the year of my first Monster Hunter game, as well! Rather than lamenting how I’ll never have time for any new games now, I’d like to highlight how great an experience Monster Hunter 3U has been so far, even though I haven’t played all that much of it in comparison to folks who literally sink hundreds of hours into each new installment. Everything from the monster designs to the little animation that plays when your character cooks meat on a spit is endearing beyond belief, and though I still really don’t have any idea what I’m doing, I’m looking forward to blundering my way through the series for years to come.

2012 was the year I really started following current anime again, and I’m happy to report that my interest in keeping up with new series bubbled over into 2013, as well. While previously I mostly watched older things (and not very often, I might add), it’s great to be involved in the conversations that arise when everyone is watching a particular series together. That said, I didn’t actually watch all that many shows, so there are only two that stand out that I want to mention today:

Free! – Also known as the best thing that happened for female anime fans all year, Free! initially made waves (pun intended) as a short 30 second commercial by Kyoto Animation early in the year. The anime itself featured a group of cute guys doing cute things in bathing suits, so of course it was a hit, but it had all of the usual Kyoto Animation quality and charm. While the anime as a whole didn’t grab me as much as I would’ve liked, the interactions between the characters always put a smile on my face. Also, that ending sequence!

Gatchaman Crowds – After hearing a number of friends recommend this one, I finally decided to give it a watch in December, and I’m so glad I did! Gatchaman Crowds requires absolutely no knowledge of Gatchaman to enjoy, and it’s a beautiful, colorful series with a lot of interesting characters and surprisingly poignant themes. It’s also the first series where I’ve actually liked the ultra-hyper cute female lead (you know the kind), so it gets major points for that.

☆Bonus best anime-related trend of the year: Attack on Titan opening parody videos. I don’t normally get into memes, but these were amazing.

If you’re a fan of this blog and haven’t played or seen everything I’ve mentioned, hopefully you’ll have some new ideas for things to check out! And please do leave your own personal favorites of 2013 in the comments so I can fill my “to do” list with more great games and anime.