I hardly ever donate to Kickstarter or other similar crowd-sourcing campaigns, but when I do, it’s nearly always because I will be getting something from donating that I would not be able to obtain by any other means. As such, when I learned Keita Takahashi, creator of Katamari Damacy* and Noby Noby Boy, would have an all-new title in the Experimental Game Pack offered as one of the rewards for the LA Game Space Kickstarter, I knew I’d have to chip in. Of course, even better that the LA Game Space was an idea I could totally get behind, even though there’s little chance I’ll ever be able to visit it in person. 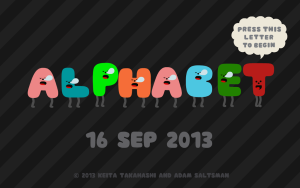 The Experimental Game Pack has a whopping 23 completed games available to download as of this post, with 10 more on the way. Unfortunately, while it was available for a limited time for those who did not back the initial Kickstarter, that ship has now sailed, meaning you’ll have to get in touch with a generous friend who has the games if you want to play them yourself.

Or, you could live vicariously though me! While Alphabet (officially written A͈L͈P͈H͈A͈B͈E͈T͈, available for Mac, PC, and Linux) is the only game in the pack I’ve tried so far, I’m very excited to dig into the vast selection of titles available, particularly Pendleton Ward (of Adventure Time fame)’s Cheque Please, Aussie-developed Sunshine, and ESNF Fortune Teller. 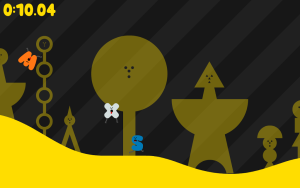 Alphabet has a very simple premise: players must guide letters of the alphabet from one end of the game’s 10 stages to the other. Pressing the corresponding key on your keyboard will make that letter move forward, while releasing it causes them to jump. And that’s it! Well, aside from the occasional poop…
The more letters there are, the harder things get to control, but I got sneaky/lazy after a while and switched to just pressing the key of the last letter in the congo line instead of trying to keep them all running at once (both work equally well). If you “consume” a piece of fruit, all the letters will turn into the letter that touched the fruit, making for extra speedy movement during more difficult segments of the stage, but within a short period of time. It probably helps to be very familiar with the locations of the keys without looking, but I can’t imagine it’d be very hard even if you didn’t. 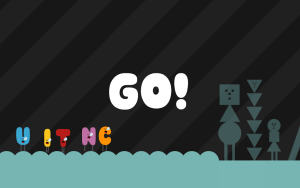 As with all Keita Takahashi’s games, the real appeal of Alphabet is its whacky charm. Its aesthetic is crisp and colorful without resorting to usual default bright colors, and the soundtrack, though it only consists of one tune, is simply to die for. I’m not very familiar with co-creator Adam Saltsman, whose previous work is most often cited as rather popular Canabalt for iOS, but rest assured Alphabet is exactly what we’ve come to expect from Takahashi. 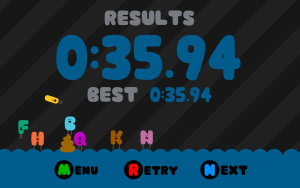 With only 10 stages, Alphabet is never difficult, nor is it very long, but I can honestly say that even if I never get around to any of the other Experimental Game Pack titles, I’d still be happy with my purchase. For those looking for a little replayability, however, each level is timed, so there is an incentive to go back and master the art of alphabet navigation.
If you’re lamenting not getting your hands on this adorable game, never fear: I’ve recorded a playthrough of the whole game for your viewing pleasure! Even if you don’t want to watch the whole thing, I definitely recommend checking it out, if just for the awesome music:

* One of my absolute favorite game series!