After giving Monster Hunter 3 Ultimate on the 3DS a whirl and even dipping my toe into the recently-released Monster Hunter 4, I can confidently say I’m a converted, albeit casual, fan of the Monster Hunter series. I say casual because, well, I haven’t been able to put more than 20 hours into either (which is peanuts compared to the hundreds of hours one can spend on these games) and I haven’t actually had time to play one since the first week of Monster Hunter 4‘s release! For shame, I know.

But I haven’t been completely divorced from Monster Hunter during my time away, as the fine duo behind Culty have once again come out with some handy goodies for both hard-working and slacker hunters such as myself. 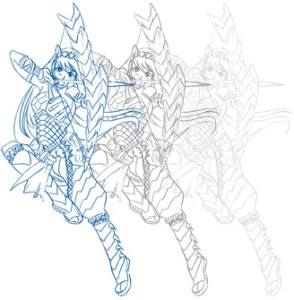 While Culty’s Beginner’s Guide was perfect for those just stepping forth into the world of Monster Hunter, their latest books focus on helping savvy players become even bigger experts at hunting down all manner of monster by uncovering the mysteries of the gunner classes.
I’ll admit I’ve never actually tried a gunner weapon, as not only do you need to be much more careful with your positioning on the field and fiddily things such as aiming, but you have to manage your ammo, as well. Sounds like too tall an order for a budding hunter, if you ask me! But Culty’s attention to detail and thorough, straightforward explanations mean that even inept players like me can learn to use bowguns and bows! Pretty neat, right?

The format of the books, which have been split into bow and bowgun editions, is very similar to the Beginner’s Guide, and nearly every page contains a delightful illustration, making the whole package feel cohesive and professional. Why hasn’t Capcom hired these two yet?
Due to the more in-depth nature of these guides compared to the Beginner’s Guide, they’ve added systematic exercises, making it easy to try out each weapon class without being overwhelmed. This is by far my favorite aspect of the guides, as it really spells out the steps to getting your head around using bows and bowguns in the field, as opposed to just teaching you the nuts and bolts.
As an added bonus, those who purchase both guides will receive bonus instructional videos and audio books! I was able to give the audio versions of the guides a listen (click the link for a sample), and though it’s a nice touch, I personally feel that I’d more likely turn to the written guide when I actually go to apply the skills in-game. Since you can get a single guide by itself for $9 and both for $18, which includes the additional videos and audio versions, I’d suggest springing for both so that you’ll always have the extra goodies if you want them.

More than anything, Culty’s Gunner Guides have gotten me itching to get back to Monster Hunter and put my newfound knowledge of the gunner classes to use. Of course, getting the hang of bowguns and bows won’t be easy, but I have a feeling it will feel like a completely new game after sticking to the switch axe for so long! If you’re like me and wanting to switch up your hunts but too intimidated to make the jump, why not let Culty’s Gunner Guides give you the push you need?