It probably goes without saying that as you grow older, your tastes change, and even perhaps mature. I’m sure I’m not the only one who finds myself increasingly cynical of modern media, be it film, anime, video games, or one of the many other forms of entertainment available today. Believe it or not, when I was in high school, I recall myself boastfully telling a friend that there wasn’t a single anime I’d seen that I didn’t like. Let me assure you, I’ve watched some anime that I wouldn’t think twice about going back to now! These days, however, I find myself in the complete opposite position – while I still like anime, it’s much more difficult to find titles I enjoy, and there are only a handful of series that I would wholeheartedly recommend to friends without hesitation.

I’m not really interested in talking about why it gets harder to enjoy certain things as you age, because that’s a whole other topic in and of itself. Instead, I’d like to highlight a title that instantly brought me back to that feeling I had when I first saw Sailor Moon transform on Cartoon Network many years ago: Little Witch Academia. 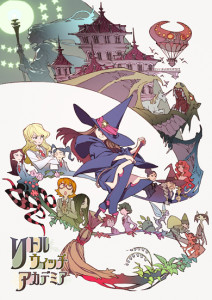 The first thing you should know about Little Witch Academia is that it’s available for free, subtitled, legally on YouTube direct from the studio that created it, so I highly suggest for anyone reading this to go check it out! It’s only one episode and clocks in at a little under 30 minutes, so it’s not a big time investment, either.

The short was created by Studio TRIGGER, a fairly new studio formed by former Gainax animators known for their work on titles such as FLCL, Tengen Toppa Gurren Lagann, and Panty & Stocking with Garterbelt. As a huge fan of Gurren Lagann, the studio automatically hit “must-watch” status in my book, though before Little Witch Academia, the only works they had produced were the web series Inferno Cop and the opening animation to the 3DS game Project X Zone.

Little Witch Academia is fairly unique in that it was produced through the Young Animator Training Project in which four studios are selected to receive government funding to produce short films as part of an effort to train young Japanese animators. While it originally aired in Japanese cinemas in March alongside three other shorts as part of Anime Mirai 2013, TRIGGER later decided to release a subtitled English version on YouTube and Crunchyroll to gauge how well it would be received internationally. 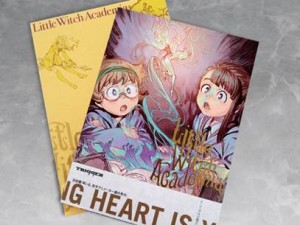 Well, those efforts must have proved fruitful for the studio, as not only did they announce a second episode of Little Witch Academia, but they launched a Kickstarter campaign to raise funds to increase the total time of the episode from 20 to 35 minutes that was fully funded within five hours of going up! The Kickstarter finished today at a whopping $625,518, and the studio has stated that if the sequel does well, they may even consider turning it into a full series or feature length film.

Not only that, but TRIGGER will also be opening preorders for Collector’s Edition Blu-Ray of the first episode of Little Witch Academia on August 13th that contains an additional making-of video and a whopping 112 page artbook of sketches, character art, and illustrations from the gorgeous short. Considering all of this has become possible due to one animated short being available for anyone to watch for free online, it’s truly an amazing feat and definitely reflects both the quality of the work and the gap it fills in the anime industry. 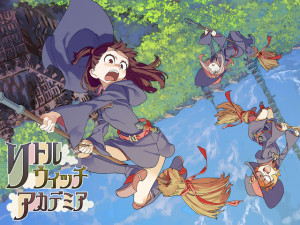 But what is it that makes Little Witch Academia so special? For me, the first few minutes of the episode where a young girl, who we later find out is the protagonist, Akko, attends the magic show of her idol, the witch Shiny Chariot, sums it up perfectly. Shiny Chariot dazzles Akko and the rest of her audience with her magical prowess, ending with the advice, “never forget, a believing heart is your magic!” The complete awe and adoration on Akko’s face during this sequence is, admittedly, exactly how I felt as a child watching Sailor Moon, and aside from the occasional Studio Ghibli production, I haven’t had an animated Japanese feature evoke the same sense of wonder in me since.

Time then skips forward to the present day, where Akko is a student at an academy for witch girls. Though she falls asleep in class and shows no real magical talent, she continues to look up to Shiny Chariot as a source of inspiration, even though the other witches condemn her for giving people the wrong impression of what it means to be a witch. Again, Akko’s clumsy nature, paired with her passion to succeed, is reminiscent of many other magical girl series.

At a time when fetishization of high school girls (and younger) saturates much of the anime (and manga) scene, it’s great to see a show that embraces the magical girl genre to create a world for both children and adults to enjoy with an abundance of non-sexualized female characters. While it I find myself less drawn to coming-of-age stories as I grow older, Little Witch Academia manages to capture the magic of Japanese animation and the “girl power” tone that first got me hooked on the medium over 15 years ago. 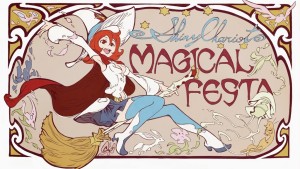 But you don’t have to be a fan of magical girls or a woman looking for a strong cast of female characters to relate to to enjoy Little Witch Academia, as it is one of the most well-animated and genuinely fun shows to come out in a long time. If you’re like me and are finding yourself bogged down by your own cynicism for current art and entertainment, give Little Witch Academia a shot. You’ve got nothing to lose!

If you watched Little Witch Academia and didn’t get a chance to support the episode 2 Kickstarter, be sure to keep your eye open for preorders for the Collector’s Edition when they open on the 13th!