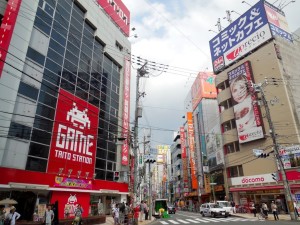 One thing I adore about Japan is the fact that, unlike the United States and Australia (and many other countries, I assume), it still has a very active arcade scene. Every large city, and even many of the smaller ones, have at least one or two arcades equipped with all the latest machines, ranging from titles westerners might know of such as Time Crisis to more obscure Japan-only interactive card strategy games, rhythm games, and crazy immersive Gundam games that look like something taken straight out of a sci-fi film.* While the rest of the world seems content to game at home, I was happy to see that even in 2013, the arcade business still appears to be booming in Osaka. The Taito Game Station in Nipponbashi above, for example, has multiple floors, each dedicated to a different genre of game, making it easy to find your favorites.

As such, I made sure to hit up as many arcades as possible during my two weeks in Japan! Of course, the first thing I did was make a beeline for my favorite arcade machine: Pop’n Music. The series has gone through quite a few iterations, but all of the machines I saw during my stay were of the Sunny Park variety, which is the most recent machine in the series, having been launched in 2012. I don’t have time to discuss how the game plays at length here, but if you’re interested in learning more, check out the beginning of this post.

Some of the Sunny Park machines actually had a card slot at the bottom, which meant you could select the option to play one song and get a random character card for 100 yen (approximately $1) instead of the usual 4 songs for 100 yen. I decided to try my luck at getting a cute card, and I wasn’t disappointed! Well, all of the character designs in Pop’n Music are drop-dead adorable, so it wasn’t much of a gamble… 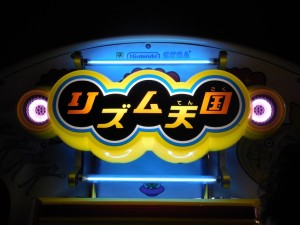 My husband and I also spotted this Rhythm Heaven machine, which, from what I gather, features the same rhythm games as the GBA title by the same name. The only difference here is that the whole package is bigger and louder, and there’s an option for a two-player mode.

I don’t mention BlazBlue all that often on this blog, but I’m what I’d call an “advanced casual fan.” Okay, that doesn’t mean much of anything, but though I like the look of the games and enjoy watching skilled fighters play, I’ve never been compelled to learn how to play it outside of some lighthearted button-mashing. But, when I heard a cross-dressing male character by the name of Amane was going to be in Chrono Phantasma, the latest game in the series, I just had to see him in action in the arcade. Luckily, the arcade version has a cheater’s mode that enables you to mash buttons and pull off all kinds of neat combos that shouldn’t normally be possible, so my husband and I were able to make it all the way to the end of arcade mode with only one credit. I’m definitely going to pick up a copy of Chrono Phantasma when it comes to PS3 – Amane is just too fabulous! 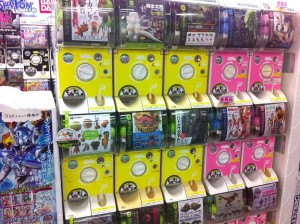 Though not directly related to arcades (though often found at or around them), toy capsule machines, or gatchapon, are another favorite way for me to spend a few of my extra coins in Japan. Many shopping centers have walls of different machines filled with everything from Pretty Cure toys to Alien figurines! 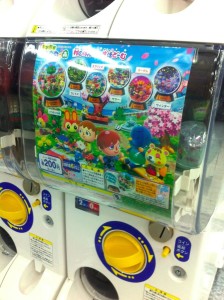 I grabbed a few of these Animal Crossing: New Leaf snow globes as souvenirs – they were quite the hit. 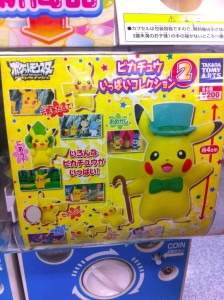 On hindsight, I probably should’ve grabbed one of these adorable Pikachu toys. I love the one wrapping a leaf around his head on the left! 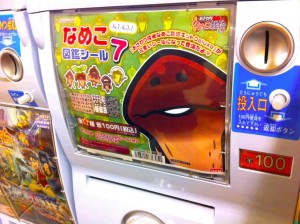 Yes, Funghi really is as popular in Japan as the various campaigns and merchandise lead one to believe. I was amazed to hear that even my host mother knew who Funghi (aka Nameko) was! The machine above is related to the toy gatchapon, but instead of spitting out a capsule, it distributes a sticker sheet out of a slot for the fine price of 100 yen. I couldn’t pass it up! 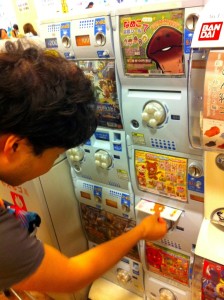 Of course, we couldn’t pass up a Rilakkuma sticker sheet, as well. Please excuse the blurry photo, but it’s the only one I got of the machine in action! 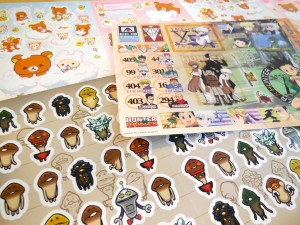 Here are the fruits of our labor! The Rilakkuma and Funghi sticker sheets were quite extensive, but unfortunately the Hunter X Hunter one pales in comparison. I could barely stop myself from trying to get all the different sheets! 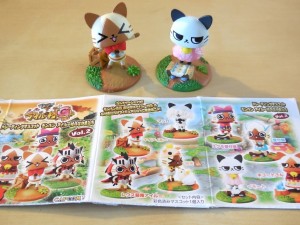 Now, these aren’t exactly gatchapon either, but when you buy one of these special boxed figurines (generally sold at hobby stores and in the candy isle at grocery stores), you have no idea which figure will be inside. There’s something fun about the excitement of opening a toy and not knowing what you’re going to get, but it’s always disappointing when you get one you don’t really like! Luckily, these Monster Hunter Felynes are all kinds of adorable. 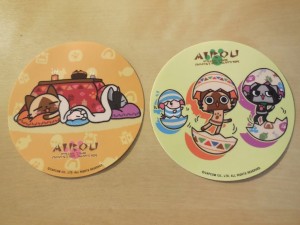 The shop that was selling the boxed Felyne figurines was having a promotion where you’d get one free sticker for every Felyne product purchased! 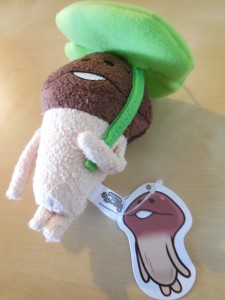 Finally, let me relate a fun arcade experience from my last day in Japan: in an attempt to kill some time and get rid of our extra 100 yen coins, my husband and I headed to a local arcade to try our hand at the crane games. Now, let it be known that I’ve never won anything from a crane game. This time, I was trying for the particular Funghi plush pictured above… the hand of the crane plummeted downwards towards the toy, barely scraping the one I was aiming for. Suddenly, a voice on a loudspeaker exclaimed (in Japanese, of course), “So close!!”

It turns out the arcade had a woman going around helping customers while chattering loudly about their successes into her microphone as a sort of promotional thing. She asked which one I was aiming for and promptly opened up the machine to put it in such an easy to reach spot that I’d have to be totally inept not to get it on my next try. Well, knowing me, that’d be possible… but as you can see from the picture above, I got it!

While I was never expecting to get anything from the crane machines, especially on my last day, it was a sweet gesture and a pleasant surprise. Have you had any memorable arcade experiences in Japan or your home country?

*technically Kidō Senshi Gundam: Senjō no Kizuna is available outside Japan, as it has been made available in a couple of Asian countries, but it was never brought over to the US