Have you ever tried a game that you were sure you wouldn’t like, only to find out that, lo and behold, you actually enjoyed playing it? I certainly have, and more times than I can count, but today I’m going to discuss the surprisingly fun demo for Pretty Rhythm: My*Deco Rainbow Wedding, a Japanese-only 3DS game that I downloaded on a whim a while back. 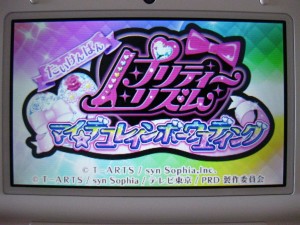 Right from the get-go, I noticed two things: there’s a whole lot of katakana in the title, and this demo has gone to great lengths to put the “pretty” and “rainbow” in Pretty Rhythm: My*Deco Rainbow Wedding. 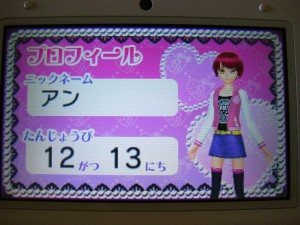 Now, Pretty Rhythm is actually a series of arcade games from Takara Tommy that has been adapted into both a manga and an anime series. In fact, the beginning of the demo actually transports you into a Pretty Rhythm arcade machine… Anyway, the basic premise of My*Deco Rainbow Wedding is that you’ve been transported into a world where Prism Shows, a unique performance that combines dancing, fashion, and ice skating, are the hight of entertainment (I couldn’t even write that with a straight face).
Of course, your goal is to become the ultimate Prism Star, but in order to do so you need to use something called a Rainbow Prism to collect seven different Prism Show styles (called “coordinates”). Once you’ve collected all seven, it’s said that you’ll be granted the ability to use the legendary “Rainbow Wedding coordinate,” which will bring the ultimate joy to viewers of the Prism Show. Who in their right mind would name something that doesn’t have anything to do with getting married a “Rainbow Wedding”? Imagine my disappointment when I realized there wouldn’t be any dating sim elements in this game!
You’re able to create a basic avatar by selecting from a a handful of hairstyles, eyes types, and outfits. My avatar, who I’ve predictably named Anne, can be seen above. 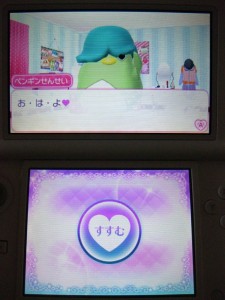 Every game for girls needs a cute mascot, right? Pretty Rhythm: My*Deco Rainbow Wedding‘s is Mr. Penguin, the toupee-wearing green penguin pictured above. I love how he needs to lift his hair out of the way with his flipper to actually see anything. 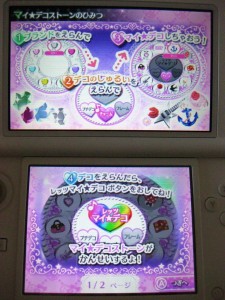 This is just an explanation of how to decorate your Prism Stone (there are a lot of things that start with the word “Prism” in this game, just roll with it) using all the various charms you acquire over the course of the game, which unlocks different outfits for your character. They sure know how to lay on the sparkles! 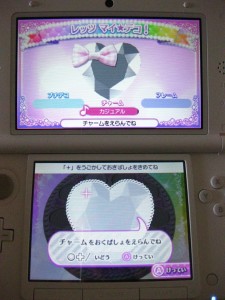 Here’s a shot of what applying charms to the Prism Stone actually looks like… It’s pretty straight-forward, you just place your charm wherever you like using the touch screen. 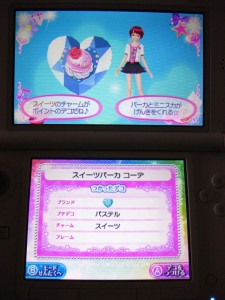 And here’s a shot of one of the outfits that came out of one of my Prism Stone decorating sprees. I’m embarrassed to admit that the hot pink sparkle motif might be growing on me…
Now, this leads me to what, believe it or not, is the goofiest part of the game: the rhythm skating portions. After your character is all glammed up, you’ll need to preform a skating routine that consists of some very Sailor Moon-like posing that is executed by repeating a series of button/touch commands a la Space Channel 5. Here it becomes abundantly clear (if it wasn’t already) that this game was made with a younger audience in mind, as the rhythm portions are both incredibly easy and, frankly, a little dull if you’re used to the likes of Theatrhythm Final Fantasy and Rhythm Heaven. But, if you’re like me and get a kick out of magical girl shows aimed at 10-year-olds like Pretty Cure (unrelated to Pretty Rhythm, believe it or not), then you’re likely to get a kick out of this, too.
Unfortunately, I wasn’t able to get any shots while I was playing the skating portions, but NiNTENDMiNATi0N has a great video of the whole demo! Just skip to 10:50 if you want to get straight to the skating segment:
So, Pretty Rhythm: My*Deco Rainbow Wedding is my definition of a guilty pleasure, and I came out of the demo… kind of wanting to buy the full game? If the goal of a demo is to get the player wanting more, then they certainly were successful with this one! What began as a silly “I’ll try this for the hell of it” evening quickly turned into a “when and where can I get this?!” Google searching frenzy, and I only have myself to blame.

If you’re as curious to try the full game as I am, you can import Pretty Rhythm: My*Deco Rainbow Wedding here. Note: As with all 3DS games, the game will only play on Japanese 3DS’s. The game uses furigana, though, and the language is very simple, so it’s a great pick for those who are in the early stages of, or interested in learning, Japanese.