So, we’re nearly two weeks into February and I’m only just now getting around to announcing what game from my backlog I’ll be tackling over the course of the month… My efforts for the Beat the Backlog Club are off to a great start, eh? In fact, I’m still hard at work on my January pick, The Legendary Starfy! (more on that in a future post… I’m determined to finish it!)

But the show must go on, and it’s my hope that as the months go by I’ll eventually start adhering to some semblance of a schedule and complete my target of 12 games by January 1, 2014. So, what lucky game will be the focus of my attention this month? It’s actually a relatively recent addition to my backlog… Harvest Moon: A New Beginning! 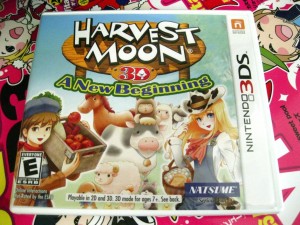 I was very much looking for a low-key game for the month, as I’ve also been tasked with reviewing Ni no Kuni: Wrath of the White Witch, so I did an informal poll on Twitter to see what people would like to see more: Harvest Moon: A New Beginning or Fishing Resort. I honestly wasn’t very surprised to see Harvest Moon smash Fishing Resort out of the water, so I happily picked it up and began farming away on my pink x white 3DS XL (by the way, I’ll still be doing Fishing Resort later this year, so the three of you who voted for it have something to look forward to).

In all honesty, I haven’t gotten much farther than creating my character and going through the initial tutorials, but I do have a few initial impressions to share:

✄ It’s very satisfying to finally be able to make your own customized character! This is the first time players have been able to choose what their character looks like in a Harvest Moon game, and I have to say I’ll be disappointed if the option doesn’t return in future titles.

✄ I know this is a very individual thing, but I’m not very fond of the game’s art style. Not only do I not really like any of the character designs (okay, some of them, especially the animals, are pretty cute), but the 3D models of both the characters and the scenery look very blah, in my opinion. Perhaps it’s because I’ve been playing too much Animal Crossing: New Leaf, but the color scheme doesn’t gel with me very well, and I keep wishing the whole thing just, well, looked nicer.

✄ Gameplay-wise, it’s very standard Harvest Moon fare, so I know I will enjoy that aspect. I can’t wait to be able to customize my character’s clothing and house and get an adorable llama!

For the curious, I’m playing as a girl named Appi with a very trendy cropped pink haircut who owns Yumyum Farm. As for my bachelor of choice (because we all know marriage is the most important thing in Harvest Moon), I might go for Amir or Soseki… Depending on how I go I might even swing for that jerk Allen, just because the things he says are so hilariously awful!

Stay tuned for another update in approximately a week’s time, and let me know what game you’re playing from your backlog in the comments!