As I mentioned in my Beat the Backlog Club announcement post, I’m cheating a little this month since I didn’t get the ball rolling for the BBC project until mid-January. As such, I’m plaything through The Legendary Starfy, a quirky platformer for the Nintendo DS that, admittedly, I started in December. Given that I only played a level or two in 2012, I figured it would serve as a good title to ease me into the idea of playing a game a month. 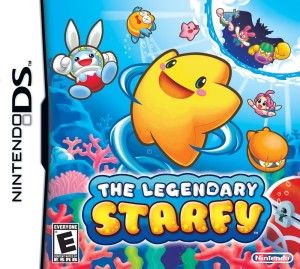 The Legendary Starfy is a relatively basic platformer, albiet a little easier than the likes of Mario or Rayman, as apparently it’s intended for a slightly younger audince. In addition, much of the gameplay takes place under water, which is generally a source of much frustration in other platformers. Gameplay is relatively straightforward, however, with Starfy using his star powers to glide effortlessly through the water and companion Bunston occassionally lending costumes that serve as power-ups.

While Starfy‘s cuteness hooked me from the start, the rest of the game has been a bit of a mixed bag. I don’t play many platformers and as such don’t think I can really articulate what I think makes some better over others, but something about Starfy‘s level design leaves much to be desired. Simply playing through them becomes a bit of a chore, especially since it’s all quite easy and the game makes it extremely clear where it wants you to go and how you should go about getting there. The kind of fun and excitement I had playing through Rayman Origins is, unfortunately, not to be found here.

In addition, the music is mind-numbingly awful. You can tell the developers wanted to go the “super-cute” route here, too, but it just comes off as being too sugary-sweet and overdone. As a result, I’ve been playing the game on mute virtually the whole time.

That’s not to say Starfy is horrible and that it shouldn’t be experienced, but I don’t think its charm lies in what traditionally makes platformers fun to play. So far, my favorite aspects of Starfy have actually been in the game’s characters and dialogue! We’ll see if that’s what gets me through the game, or if the gameplay actually gets better later on…

Are you playing a game from your backlog this month? Feel free to share what title you picked and chat about your progress in the comments!