I’ll try my very best to talk about all the special events and fun tidbits that people might not know about in Animal Crossing: New Leaf, so keep in mind that these posts will be chock-full of information and screenshots that “spoil” some of the surprises in the game. That said, I won’t cover every little thing in order to keep some of the magic there for those of you who haven’t gotten the chance to play yet, but I can’t guarantee anything, so please proceed with caution!

But before I begin, you’re probably wondering why I decided to title this “Memos from Mamemura.” I’ve named my Animal Crossing: New Leaf town Mamemura, which literally means “bean town,” but I like how it almost sounds like Amemura, short for America Mura, which is an actual location in Osaka.  Of course since I am actually American, a town who’s name is a pun of Amemura sounded like a grand idea! (Amemura really doesn’t have much of anything to do with America, if you’re wondering) And I’d like to give everyone who pitched title suggestions in my last post a huge thanks for the wonderful inspiration! If it weren’t for your awesome ideas, I wouldn’t have come up with Memos from Mamemura, which I’m quite proud of, if I do say so myself.

Enough talk! What have I been up to in the world of Animal Crossing: New Leaf? 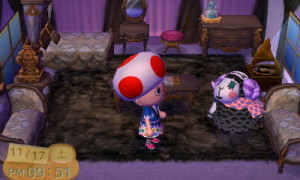 I got a whopping three new villagers over the past two weeks! The first to appear was Frill, who, if I’m not mistaken, is new to New Leaf (someone please correct me if I’m wrong!). Doesn’t she look like she came straight out of a Tim Burton film? And I love the Victorian decor! I wonder if they were channeling lolita goth when they designed her. 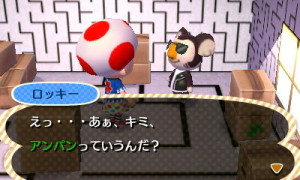 Next came Rocky the koala, another (definitely) new villager to New Leaf! I’m really lucky to have gotten such a wide range of characters! I just adore his shades, sideburns, and leather jacket. 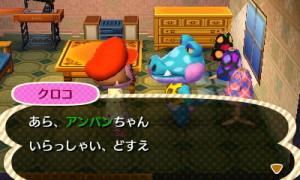 Finally, we have Kuroko, or Alli in the English versions. It’s lots of fun to see old and new faces mingle. 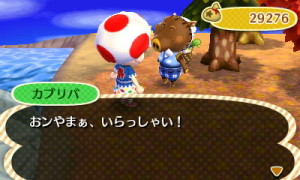 I got my first visit from Kaburiba, or Joan, the lady who sells turnips. As all Animal Crossing aficionados know, you can make quite a killing reselling turnips to shops, as the price changes from day to day (I believe it even changes multiple times a day in New Leaf). The only downside is that they go bad in a week, so you might find yourself stuck having to sell them back for a less-than-desirable price. I thought Joan was trying to pull me a fast one by setting the turnip price rather high this week, so I decided to play it safe and not buy any. 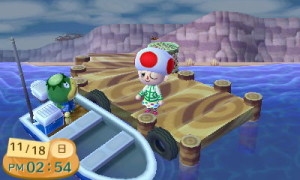 I finally unlocked the island! If only I took better notes, I’d be able to say exactly which day this occurred on… After completing certain tasks as mayor, Tortimer, the mayor of previous Animal Crossing towns, will appear when you load up your game and invite you to visit his island. From the next day, you’re able to travel to the island whenever you wish, as long as you can afford the 1,000 bell fee. It’s a great place to find rare bugs, fish, and fruit, as well as play special mini-games! 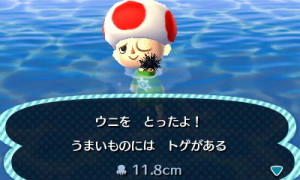 Swimming is new to New Leaf, as well, and can only be done on the island. It’s a lot of fun diving for things! You can see I’ve caught a sea urchin above.

I bet you’re wondering what’s wrong with my eye in the above screens, right? Well, guess who shook one too many trees? I pushed my luck too far and a beehive landed right next to me! I was no match for those bees. I love how the villagers react to seeing your mangled face. They suggest to find medicine but I had no idea how to get any… Luckily all was well the next day. 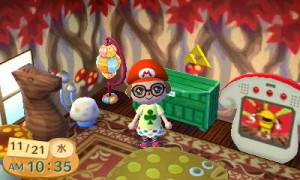 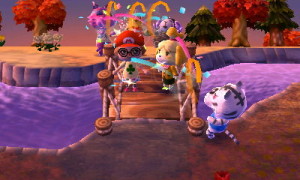 My first project as mayor was building this bridge! Every time you compete a project (i.e pay off your debt) you’ll have a little celebration with some of the villagers and Shizue, the secretary. 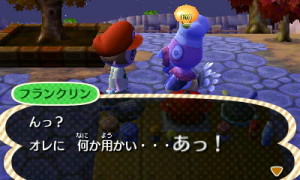 Last Thursday was the Harvest Festival! This turkey, Franklin, shows up in everyone’s towns asking for ingredients to cook a feast. Unfortunately the event was going on when I was traveling, so I didn’t get a chance to complete all the tasks. 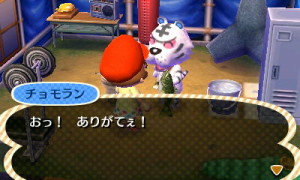 I did, however, trade some ingredients with some villagers… 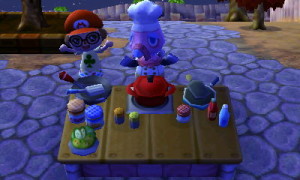 and brought them back to Franklin to make a mushroom salad! He asks you to bring a “secret ingredient,” but I didn’t realize I needed one, and unfortunately there’s no turning back once you have the required items and initiate a conversation with him. Basically, my lack of the secret ingredient meant that it wasn’t the “best it could be,” which leads me to believe I might’ve gotten a better item had I brought the secret ingredient. I’m happy with the harvest dresser I got in return, but it’s a shame I’ll have to wait until next year to do the rest of the event! 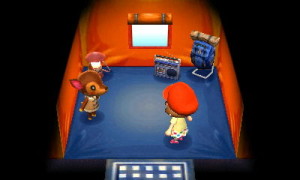 I also built a tent in my town so wandering villagers could come visit. You can play a short guessing game with them, and in this case the conniving deer you see above, Doremi (another newcomer to New Leaf!), managed to swindle my bug net off me for a mere 56 bells because I kept picking the wrong numbers (it’s basically all up to chance, I believe). Luckily she said she enjoyed my town and wants to move in, so I hope to see her soon! 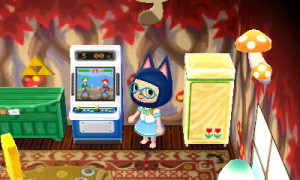 Gettin’ my nerd on with an arcade machine and cat ears. 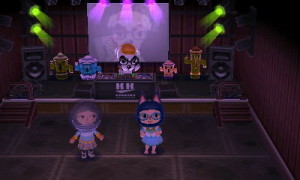 Finally, though I don’t have space to share all of the pictures I have from visiting friend’s towns, I wanted to show a quick glimpse of K.K Slider’s Club 444. You can actually dance around by pressing the directional buttons and everything! (Can you see my little hip shake in the above image? Talk about cute!)
Well, that about sums up my last two weeks in Mamemura. As always, if you have any questions about the game, feel free to leave them in the comments and I’ll do my best to answer. See you next week! 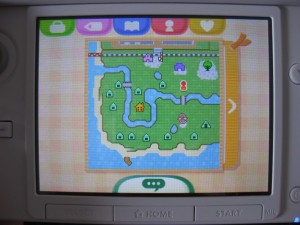