What do fashion shows, deranged nurses, and a talking rabbit have in common? They just so happen to feature in the three game demos I played over the last week! The first week of October was surprisingly busy for game demos, and though I don’t usually jump at the sight of a new demo, all of these happened to be titles I’m interested in enough to give them a shot. I know you’re dying to see what titles I’m talking about (or have you guessed already?), so I’ll cut right to the chase. 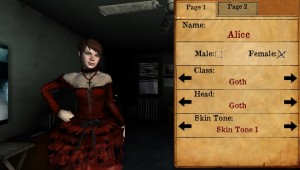 Silent Hill: Book of Memories (PS Vita)
It probably won’t surprise any of you to hear that I’ve never properly played a Silent Hill title before. I’ve played and watched various segments of Silent Hill 2 (mostly the beginning, along with the infamous pyramid head scene), and though I know a good deal about the series in general, I don’t particularly have a huge investment in it, nor do I know enough about the games to have a discussion on them. Taking that into account, I was still surprised when I heard that Book of Memories was going to be an RPG. “A Silent Hill RPG? Now that’s something I’ve got to see!” accurately sums up my reaction to the news that the demo was finally up on the North American PSN.
As you can see from the image above (have I ever mentioned how much I love the PS Vita’s screen capture function?), I wasn’t horribly creative with my character, choosing to go for the gothic lolita look and generic goth gal name Alice. Did you know my parents almost named me Alice? Well there’s your random Chic Pixel trivia for the day! 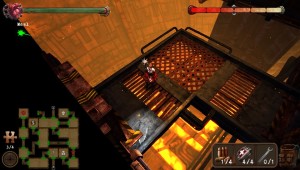 So, how does it play? I came out pleasantly surprised and satisfied with my time with the Silent Hill: Book of Memories demo. I didn’t find the areas and overall graphical style very appealing, but the gameplay was interesting and made great use of the PS Vita’s touch screen to pick up/use items and weapons. I’d go so far as to say that this game has the best mixture of traditional and touch screen controls I’ve seen on the PS Vita since launch!
Gameplay consists of exploring various rooms in a randomly-generated zone, battling classic Silent Hill enemies, and collecting puzzle pieces to unlock the door to the next area. All traditional RPG elements are present, including experience points and artifacts that can be equipped for a range of stat boosts. There’s also a heavy multiplayer element that is apparently included in the demo, but honestly I couldn’t figure out how to get a multiplayer sessions going! Will I pick it up on launch? Probably not, as I’m generally more interested in more story-driven RPGS, but this demo has definitely convinced me that Silent Hill: Book of Memories is not some throwaway spinoff. 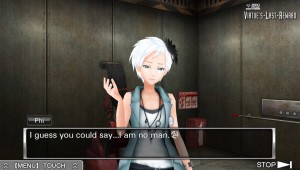 Zero Escape: Virtue’s Last Reward (PS Vita)
The second PS Vita demo I sank my teeth into (figuratively, of course) was for the upcoming sequel to 999: Nine Hours, Nine Persons, Nine Doors, the graphic adventure/visual novel for the Nintendo DS which has subsequently been rebranded as Zero Escape: Nine Hours, Nine Persons, Nine Doors. For the record, I have played 999, and I definitely consider it one of the standout titles on the DS. The mixture of interesting puzzle segments, a gripping and surprisingly mature story, and gorgeous character designs quickly earned it a special place in my heart, and I’ve been looking forward to the sequel’s English release ever since. 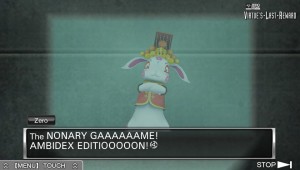 Like 999, Virtue’s Last Reward features a deadly game that forces its participants to use their wits and make some difficult choices in order to escape from the compound they’ve inexplicably found themselves in. This time around, the game is known as the Nonary Game: Ambidex Edition (for reference, 999‘s game was just the Nonary Game) that requires its participants to either betray or cooperate with the other players in an effort to obtain the necessary 9 BP (“bangle points”) needed to escape. In all honestly, I still don’t quite understand how this system works, but in my defense it didn’t really factor into the demo, which only featured a short visual novel segment that introduced the story and an escape portion that focused entirely on escaping from a certain area.
As always, Aksys’ translation is quite humorous, and I regularly found myself chuckling at the quirky dialogue. The gameplay also remains true to its roots: Virtue’s Last Reward requires you to work out a series of puzzles that involve investigating the world around you, and since this is the PS Vita version (it’s also coming to the 3DS, but the demo is PS Vita-only at this time), there are a lot of touch screen controls. I’ll admit that after playing the Book of Shadows demo I felt like the touch controls here were a little more difficult to get used to, and I often found myself doing actions I didn’t intend to. 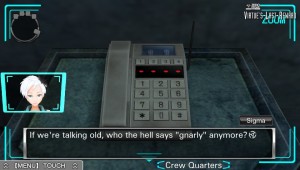 The visual novel section features a quick introduction to the game’s story that, in all honesty, didn’t really grab me, which was unfortunate, but I’m still (perhaps naively) confident that the actual story will end up being just as engrossing as 999‘s was. One final quibble: I wish the game retained the 2D character illustrations of its predecessor rather than making the jump to 3D models, but I can understand why they made that decision. But can you just imagine how lovely Kinu Nishimura’s gorgeous art would be on the PS Vita’s screen? I know I can!
Honestly, it sounds like I was rather underwhelmed by this demo, and I suppose I untimately was, but that’s only due to the fact that I have such high hopes for this sequel. It’s still something I’m planning on playing –– I just hope the story delivers. 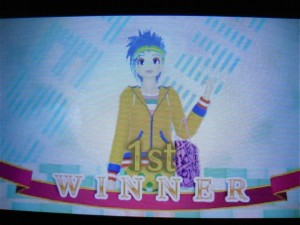 Style Savvy: Trendsetters (3DS)
Of course, I’ve saved the best for last! Yes, I’m not kidding, and yes, I can just imagine you all side-eyeing me very hard right now. If a game titled Style Savvy: Trendsetters doesn’t sound like something that will appeal to you from the get-go, I certainly won’t try to convince you otherwise, but I’m happy to report that the demo has proven itself to be a competent fashion game and not just another shovelware title destined for bargain bins and 5-year-olds.
The first notable thing about this demo is that it only gives you a measly five tries, rather than the full 30 that usually come with 3DS demos. Funnily enough, though I never use more than one or two of my alloted demo plays, this is the one title that I think I’ll actually run out of tries for. The reason for this is that though Trendsetters only gives a sample of one portion of the game, the fashion contest, there are at least two different themes you can compete in, each with different clothing choices, and a wide range of randomly-selected models to choose from. At the time of this post, I’ve played through the demo four times (all on one “use” since I didn’t exit out of the demo itself), and have tried both the “pop” theme and the “bold” theme (for the record, I got pop three times and bold once, which leads me to believe these are the only options). 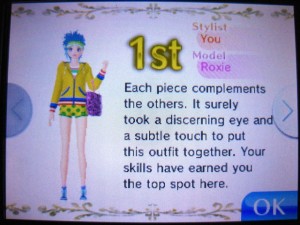 I guess I must not be very style savvy (pun intended), since it took me all four tries to get first in the competition. The fashion contest pits you against three other stylists, and it’s your goal to select and dress a model according to the theme with the goal of being the best representation of that theme on the catwalk. I’m really not sure how the game determines what’s fashionable and what’s not, but there are certain clothing brands that it indicates as fitting better with certain themes. The above two images are my winning coordinate for “pop,” and I thought I was just phoning it in, so who knows.
Regardless, if you have any interest in fashion, Style Savvy: Trendsetters should definitely keep you happy. The full game has you managing your own store, among other things, and I must admit it’s a title that I’m extremely looking forward to picking up. Also, it gets major props for featuring lolita fashion and allowing you to dress men as well as women!
So, did you play any of these demos, or are any of these titles on your radar? I’d love to hear your thoughts!