I realize this is old news now, but I can’t help but share my thoughts on the recently-revealed Animal Crossing 3DS LL. Just look at it! I’ve heard some say it looks too much like a polka-dot underwear pattern, and though I suppose I can see where they’re coming from, I think the small repeating pattern on the white system is actually very classy. The red x black Mario 3DS isn’t too shabby either, but let’s face it, I only have room in my heart for Animal Crossing.

Now some of you may recall that I started pondering the possiblity of buying a Japanese 3DS LL (or XL for us westerners, but I’ll continue to call it an LL since I’m talking about the Japanese version) back when the Pikachu yellow version was announced, and I have to admit that even though I didn’t manage to snag one of those (believe me, I tried, and you can hear the gritty details in the upcoming Nichiest Podcast Ever), the whole ordeal has subsequently found me comitted to buying a 3DS LL sooner rather than later. Hell, I’ve even started contemplating what Japanese game I’ll get with it! 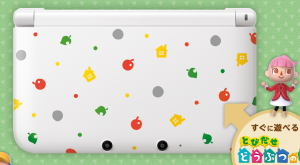 I was nearly charmed into buying that gorgeous little pink x white 3DS LL, so this Animal Crossing limited edition came at just the right time. Releasing on November 11th and coming with a digital copy of Animal Crossing preloaded onto the SD card, this system is basically a sign from Nintendo that I am meant to purchase a 3DS LL before the end of the year. And purchase I shall, as long as there aren’t crazy day one shortages like there were with the Pikachu 3DS LL!

But enough about me… what do you think of the Animal Crossing 3DS LL? Prefer the Mario one? Think they’re both rubbish? I’m curious to know!

[UPDATE] And now that lovely Pikachu 3DS XL is coming out in Europe… Way to throw a wrench in my plans, Nintendo!!