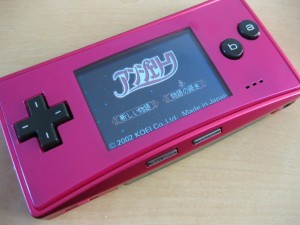 After taking a walk down nostalgia lane with Angelique‘s packaging and manual in my last post, I sat down with the game so that I could report back on its gameplay systems and how it stacks up against modern otome games. 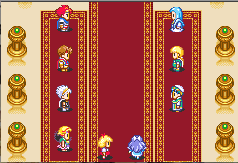 The game begins with your character, your rival Roselia, and nine guardians at an audience with the Queen of the Cosmos and her assistant, Dia. You’ve been selected to take part in an exam to compete to be the next Queen, and it’s your job to shape your country into whatever kind of land you choose – as long as you end up with a higher population than Roselia at the end!
In order to make your land prosper, you’ll need to request the aid of the nine guardians, each with their own unique powers. You can do things the “clean” way and use them to make your people happy, or fight dirty by having them sabotage Roselia’s land. 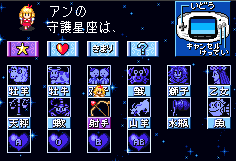 Before you jump in, you need to choose your star sign and blood type. This influences what guardians have a higher compatibility with you from the start. 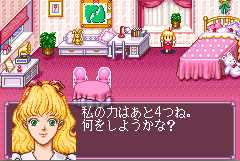 Angelique uses an energy system to dictate how many actions you can do each day. You begin in your brilliantly pink room with four energy hearts at the start of the game, but achieving certain goals will reward you with more hearts. When I finished my first playthrough, I had a total of six hearts. 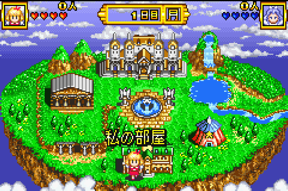 This is what you’ll see when you leave your room. Selecting a destination doesn’t use any energy, which is great if you get sidetracked like me and find yourself somewhere you didn’t mean to go. At the top left is how many energy hearts I currently have, and above that is the number of people in my country. As you can see, I’ve just started, so I don’t have anyone yet! The center tells you what day it is, and at the far right is Roselia’s stats.

The bulk of the game is spent going around to each of the nine guardians to ask for their aid. Here I’m asking Olivie to give me lots of power. This uses four hearts, which means I’m done for the day. Alternatively, I could’ve picked the left option, which means he would only use a little power. This only consumes two hearts and means I would still have two left to go ask another guardian for a little power, if I wanted. 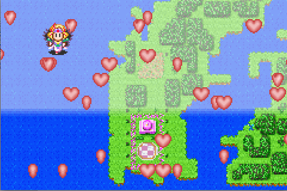 Once you’re out of energy, it’s back to your room for a good night’s rest. While you’re sleeping, any guardians you’ve contacted will do their thing, which brings me to the most tedious part of the game… watching each guardian’s animation every single day. There’s no way to fast forward this, and especially later on in the game when you have multiple guardians bestowing their powers on your land at the end of the day, it feels like it takes forever for the cutesy guardian-specific animations to finish. As you can see above, Olivie’s power involves throwing hearts all over everything. 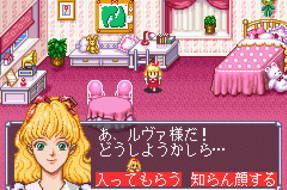 If you’re really popular, you might have a guardian visitor when you wake up in the morning. You can either let them in or ignore them, but according to this guide, it’s actually better to let them in and then turn them down rather than ignoring them entirely. Don’t worry, I’d never turn down a guest! Hanging out with guardians is one of the quicker ways to raise their affinity level. Not only is this important for building a relationship with them (if you want), but guardians with a high affinity level will randomly bestow their powers on your land at the end of the day, even without you asking! 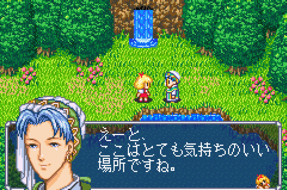 You’ll be seeing a lot of that waterfall, as it’s only one of two date spots in the game… 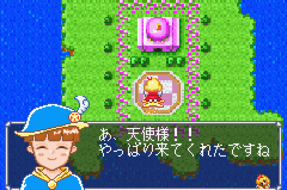 Every six days, you’ll go down to check on your country. The game encourages you to talk to the people, but your only real connection to the “people” is this super-cute representative with the stylin’ cap who grows older as you progress through the game. It’s helpful to listen to what he says, as he’ll usually indicate which guardian’s power would be best for the next week, but I’m not sure that it really matters whether you listen to him or not (though I generally did). 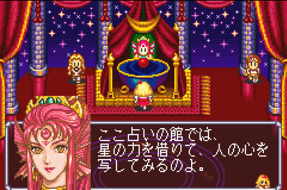 Of course, this wouldn’t be an otome game without some way to gauge how you’re doing with the wide variety of male characters, which is where this fortune teller comes in. Remember, the goal is to end up with one of them in the end, after all. Well technically, in Angelique you can also become Queen, which puts a nice spin on the traditional formula, actually. It’s great to see an otome game that doesn’t treat being alone at the end as a “bad” ending! 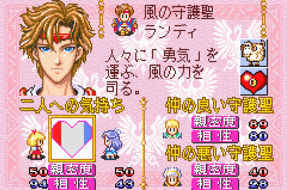 This is what an individual guardian’s stat screen will look like at the beginning of the game. The top gives their name, power, star sign, blood type, and a brief description. At the bottom left is Roselia and your affection levels with the guardian, and below that is your compatibility. I’m not sure what computability has to do with anything, but it may influence how easy it is to raise their affection. 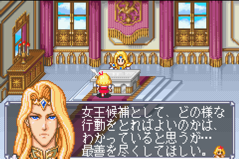 And that about sums it up! There’s just one more thing: you have one day of the week off, which you can use to spend time with whichever guardian you choose. These dates help raise your affection level, and sometimes you’ll be treated with special scenes with the characters. Then it’s just rinse and repeat…
Playing Angelique was a great learning experience, but I have to admit that it got very repetitive very quickly. There are few dialogue options, so you’ll quickly be seeing the same things over and over again, and the inability to fast-forward through the guardian animations at the end of the day is downright infuriating! I honestly found it difficult to play through all the way to the end because of it. But I did, and I managed to raise my affinity with one of the characters to 200, confess to him, and… Voila! 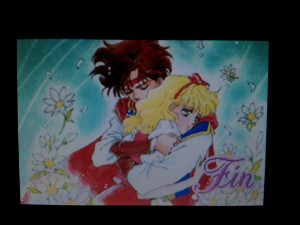 I definitely recommend at least giving a rom of Angelique a shot, especially if you’re a fan of otome games. Because it’s so repetitive, it should be very easy for non-Japanese speakers to play, as well! It may not be the best game I’ve ever played, but I’m certainly glad I can say I’ve played it.