Pop’n Music is hands down my favorite arcade game. Ever. Why it hasn’t expanded to arcades outside of Japan is beyond me, as it’s the perfect example of what makes an arcade experience great: catchy loud music, lots of colors, wacky cuteness, and unique gameplay that can’t be replicated at home.

For those familiar with Dance Dance Revolution, the idea behind Pop’n Music should sound familiar. The aim of the game is to hit nine colored buttons in time with the music, following corresponding colored markers that make their way across the screen. It’s easy to learn but difficult as all get out to master, let me tell you!

To get an idea of what it looks like in action, check out this video:

(Now, I’ll have you know that I can play with all nine buttons, but I’m still much closer to the “unskilled foreigner” in the video ability-wise)

Because of my affinity for the arcade version of Pop’n Music, I felt it was my duty to pick up a copy of Pop’n Rhythm (aka Pop’n Music in the US) when I saw it used on the shelf of my local EB Games. First of all, the box art is adorable!

But unfortunately, when it comes to gameplay, it just doesn’t hold a candle to its arcade brethren. That’s largely due to the fact that Pop’n Rhythm has players using the nunchuck and Wiimote in lieu of actual buttons. The nine buttons you need to hit only appear on screen, requiring you to jerk the nunchuck and Wiimote left and right until your avatar’s hands line up with the buttons, after which you then jerk your hands downward to “hit” the button, much like a game of Whack-a-Mole. It’s horribly inaccurate and gets uncomfortable to do very quickly, especially on some of the harder songs.

Weird, inadequate gameplay aside, Pop’n Rhythm also commits one of the most cardinal music game sins: it has absolutely no unlockable music. What’s the point of playing through all the songs and trying to better your score if there aren’t any additional songs to unlock?! Some of my fondest memories of DDR were of unknowingly unlocking new tracks to groove to. 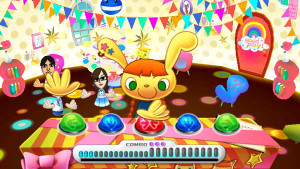 It may not be the complete failure that Samba de Amigo was on the Wii, but Pop’n Rhythm comes nowhere close to capturing what makes Pop’n Music such an amazing series. For players who have no experience with the arcade version, however, Pop’n Rhythm probably has enough substance to garner a couple afternoons worth of fun.

The moral of the story is that though my husband and I got about a 30 minute session of arm flinging while laughing hysterically as we tried to figure out exactly how to play it properly, I was happy to take advantage of EB Game’s used game return policy and return Pop’n Rhythm from whence it came. Cute box art and animation aside, I don’t think I’d ever want to pick it up again.