I absolutely love libraries. Sometimes they’ll randomly get the most exciting things! I’ve been following the manga/anime series Wandering Son (Japanese title Hourou Musuko) for many months now, but I never expected my local library here in Brisbane, Australia to order not one, but multiple copies of the first two volumes! As such, I was finally able to sink my teeth into this series, which has been hailed in Japan and abroad as being a heartfelt and honest coming-of-age story that tackles issues surrounding gender identity. 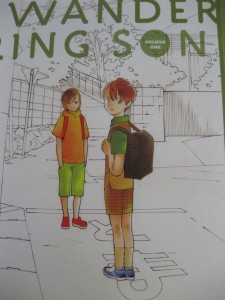 What with all the gender bending and boys’ love manga coming out of Japan, you may be thinking that the Japanese simply refuse to tackle gender issues in a realistic, meaningful way. And perhaps you would be right… Though representations of gender in Japanese media are much more fluid than those found in the west, they’re still largely limited to a few, narrow stereotypes. This is why Wandering Son is so important.
The story follows the everyday lives classmates Shuichi Nitori and Yoshino Takatsuki, two transgendered youths on the threshold of adolescence. Drawn in a minimalist style, the series tackles the various issues and questions raised associated with coming to terms with one’s gender identity in a subtle yet meaningful way. For much of the first volume, Shuichi’s biggest hurtle is whether or not he can summon up the courage to try on female clothes, and the unknowingly hurtful things his friends and family say or do while they remain in the dark regarding Shuichi’s discomfort towards living his life as a boy.
On the flip side, Yoshino is a forward young girl who is widely accepted for her tomboyish appearance and even receives some advances from fellow women when crossdressing as a man. Shuichi’s friendship with Yoshino eventually gives him the push he needs to start experimenting with a female identity, and it is his small steps towards becoming happy with himself that stuck with me long after I’d put down the second volume. 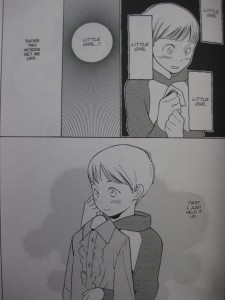 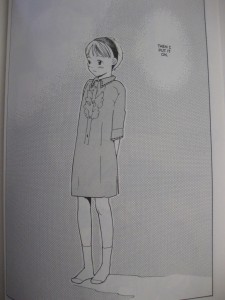 I highly recommend anyone who has an interest in LGBT issues to pick up Wandering Son, regardless of whether or not you read a lot of manga. It is, in many ways, distinctly Japanese, but its straightforward and honest deception of gender issues is rare in any medium, and it shines equally as a coming-of-age tale, especially for anyone who’s ever felt they never quite fit in.
It’s also worth noting that the hardcover editions of these two volumes are gorgeous – the oversized format, color pages, and essay by translator Matt Thorn in volume 2 all highlight what a masterpiece this series is. I’m eagerly awaiting volume three, and I can’t wait to pick up my own copies to add to my bookshelf.