Before Hakuoki: Demon of the Fleeting Blossom was released in English this past Valentine’s Day, otome games remained largely off the radar of the vast majority of western gamers. Unfortunately, as far as I can tell, Hakuoki hasn’t caused a huge surge of interest in otome games. Still, it’s been nice to see some people who wouldn’t normally pick up an otome game review Hakuoki or purchase it on a whim. 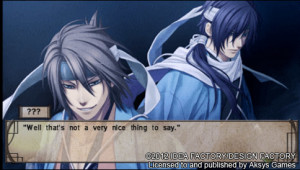 But reading about my friends’ and others’ first steps into the world of female-oriented visual novels and dating sims has reminded me how difficult the world of otome games can be for newcomers. I don’t by any means claim to be an authority, but there is one very important piece of advice that most fans of the genre often neglect to mention to inexperienced players that I’d like to make very clear:

In order to get a “good” end in an otome game, one must always select options with the character who’s ending they wish to obtain in mind.

This may seem so obvious that it’s not even necessary to state, but I’ll be the first to admit that I didn’t realize that was how I needed to play when I picked up my very first otome game. Ah, Christopher of Tokimeki Memorial Girl’s Side 2nd Season, we just weren’t meant to be…

When presented with a game like a visual novel that allows one to choose from multiple options in order to advance the story through various “paths,” you’d first think to choose answers would be based on what you would do in real life, no? Or, at the very least, a player might fashion a new persona for the sake of playing the game and choose options based on what kind of character they were role-playing as.

How would this strategy fit into an otome game, then? Under normal logic you would think that based on the various options you choose, a male prospect would be selected by the game for you. Otome games, however, are not so advanced, and in an effort to create some kind of difficulty, have a very strict, structured way that they must be played in order to obtain the best endings.

Otome games are based around the idea that the player is going into the experience with a favorite character already in mind, first and foremost. Whether visual novel-style or featuring more sim-based elements, otome games leave little to no room for changing one’s mind, meaning that from the second the “start” button is pressed, all energy must be focused on obtaining one, and only one, “datable” character. This is because set parameters must be met and/or extremely specific options selected in order to advance to the “right”path. Make one wrong decision and it’s a “normal” end, or worse, game over.

With so many paths and endings to obtain and sometimes seemingly arbitrary decisions that must be made in order to reach them, many players of otome games read walkthroughs before or during play. Though this may seem like it takes all the fun out of getting the right ending through trial and error, saving and reloading a game file every time you make a bad decision (and you often won’t know what was a bad decision until the end of the game) can get extremely frustrating. No one plays otome games for the difficulty, anyway, so the easiest and fastest way to see the whole story unfold is often the most preferable. Luckily, many titles such as Hakuoki offer visual cues to indicate when correct answers have been chosen, and relationship meters that can be viewed at any time to see how well you’re doing with the game’s various characters.

So, next time you want to jump in to Hakuoki: Demon of the Fleeting Blossom or other such otome game, take a moment to consider which male prospect you would like to pursue before loading up the game. Character-specific endings are always so much more fulfilling than the generic ones, and you may even find yourself drawn to a character you wouldn’t have found appealing otherwise!

But, I’ve gotta admit: it’s a little depressing when you first realize what your mother always told you about just being yourself won’t get you any guys. Hah!