I know Japan is famous for their superbly weird merchandise, but I never thought the day would come when I’d be writing about an anime/razor crossover… Yup, you read that right. The razor company Schick has teamed up with hit sci-fi anime Evangelion in preparation for the upcoming remake film Evangelion 3.0: You Can (Not) Redo (which isn’t coming out until fall, funnily enough), and will be releasing all manner of crazy tie-in razors. 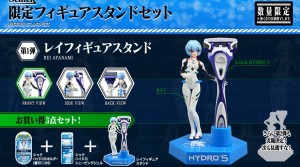 If you ever wanted your razor stand to feature one of the absurdly popular female leads from the anime, now’s your chance, I suppose. More interesting than the stand, in my opinion, are the cell phone keychains they’ll be giving away with purchases:

Why does Eva 01 need a razor? The world will never know…

Finally, this promotional illustration does a brilliant job of summing up just how weird this campaign is:

I’m not sure if someone in Schick went off the deep end or had a stroke of genius… I’m actually leaning towards the latter, ’cause I’m seriously starting to think I wouldn’t mind one of those keychains! If you’re finding yourself oddly intrigued by the campaign, you can view the official website here. Of course, as always, this is a Japan-only promotion.