I haven’t done a “Vintage Finds” post in quite a while, but that isn’t due to lack of awesome finds. In fact, I just scored a 50 cent grater the other day, and it’s quickly become one of my favorite kitchen utensils (freshly grated cheese! shredded vegetables!). But really, does anyone care? I figure this blog would be a lot more interesting to read if I had, at the very least, a hint of an overarching theme (it’s Japan-related stuff if you’re wondering). So no posts about cheese graters! But I did find some things yesterday that fit my self-imposed theme perfectly, so today marks the long-awaited return of the “Vintage Finds” series! 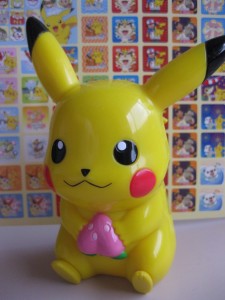 Let me tell you, there’s nothing better than walking 5 minutes down the street from your house to the local vintage shop to see what treasures it holds. I generally stop by once a week to see what new items they have, and every once in a while, I find something that I just have to have. Yesterday, Shaun and I ran into not one, but two items hailing from the land of the rising sun!
You always have to wonder how a random Japanese toy such as a talking plastic Pikachu (above) makes its way to a moderately-sized suburb in Australia. And in such good condition! Interestingly, though it has a speaker on its back and a place to insert a battery, it doesn’t have any buttons or anything to indicate exactly how it works. I’m going to get a replacement battery soon so I can try it out and see if it actually works. But I wouldn’t be fussed if it was broken. That little pink poffin he’s holding is too cute! 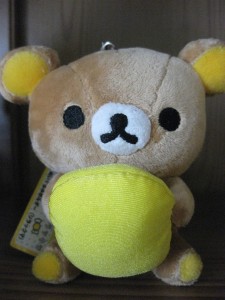 The next item we spotted (actually, though Shaun was with me, I’ll take all the credit for finding these treasures) was this handsome Rilakkuma doll. If you’re a frequenter of this blog, then you already know how much I adore Rilakkama (and if you don’t, now you do!). Funnily enough, it’s still got the tag, which indicates that the strap was manufactured in Japan in 2004. The previous owner took the liberty to blot out the suggested retail price, but I’m sure the $5 we paid for it is probably just as much, if not more, than what it cost originally. Honestly, though, it looks brand new!
For now, these two fellows will join my other assorted treasures, but Shaun’s determined to put the Rilakkuma keychain on one of his bags, which I will begrudgingly allow when the time comes. Seriously, though, I kid. It’s nice to keep things looking pristine, but it’s also nice to use them as they were intended. 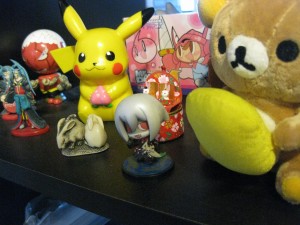 Can you name all of the characters on my shelf? (two are duplicates, and the white rabbits and red thing between Pikachu and Rilakkuma don’t count) Hint: all are video game characters. First person to get them right gets a random sticker from my collection (hey, I’ve got some good ones!).
Update: Ok, it’s come to my attention more than once that I’m losing serious Japanophile cred for not having any totoros in the above picture. But when did I ever say that was my whole collection? My totoros (oh yes, I have more than one) have a shelf of their own: 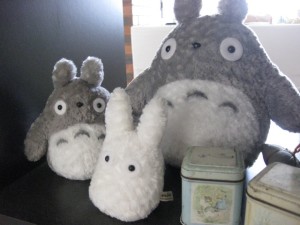