Sometimes I feel like I could just throw my money in Square Enix’s general direction. I know that’s a funny thing to say, given my recent disdain for certain Final Fantasy titles that will not be mentioned, but for some reason I keep going back to Square Enix for more, particularly when it comes to Kingdom Hearts. The release date and a limited edition 3DS for the latest Kingdom Hearts title have been announced, and I am really liking the 3DS’s design.

Even if you don’t like Kingdom Hearts, you’ve got to admit that’s a pretty sleek design! I particularly like the pink crown and the contrast it provides. Now, I’ve never bought a limited edition console before, and I’m definitely not going to start here, but that won’t stop me drooling over it a little bit.

Kingdom Hearts 3D will be released on March 29th in Japan, which is soon enough that I think it’s high time we catch wind of a localization (c’mon, it’s bound to happen). Of course, if you want the 3DS, you’re going to have to import. The first print run of the game will also include a limited edition AR card, which unlocks a difficult to obtain Dream Eater in the game.

Square Enix also sent out a few new screenshots for the game. One, in particular, is pretty interesting to me: 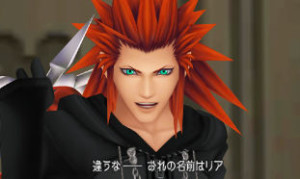 Now maybe I’ve been out of the loop, but I honestly didn’t realize Axel would be in the game (those of you who’ve played Kingdom Hearts should know why). Admittedly I was a bit of an Axel fangirl back in the day, so it’s nice to see him make a comeback.
EDIT: Well, it has quickly come to my attention that I am incorrect! That’s not Axel, but Lea, as is evident in his lack of certain distinct facial markings. I haven’t played enough of Kingdom Hearts: Birth By Sleep to know much about Lea, and I won’t spoil it for you all, but needless to say he isn’t all that different from Axel. Now finishing Birth By Sleep before Kingdom Hearts 3D comes out is a top priority!
Though I should probably know better than to get too excited for a Kingdom Hearts title these days, I’m going to continue to be optimistic for this one. Are any of you planning on picking it up when it comes out?

Attention HAKUOKI fans young and old!
The archive streaming for "Musical HAKUOKI SHINKAI Side Saito Hajime” will open to overseas!