No, I’m not having relations with another man… I’m talking about a certain big-headed blue alien of recent movie fame! Why doesn’t anyone seem to care about Megamind? I’m going to say it right now, loud and clear: Megamind is the best animated film I’ve seen in a long time! Rango? Meh. Despicable Me? Saw that yesterday. Eh. Toy Story 3? Cute, made me cry… But no. How to Train Your Dragon? Good, but it just can’t hold its own when compared to Megamind. Granted, I have yet to see Tangled, which everyone is raving about, but somehow I doubt I will be able to say I enjoyed it more than I enjoyed Megamind. 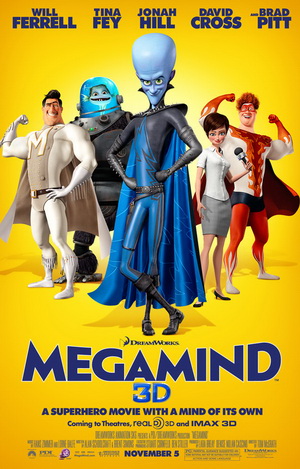 So what’s so good about Megamind, you ask? First and foremost, beyond anything else, Megamind is hilarious. My husband and I went to see it in theaters for my birthday back in December and were oh-so-pleasantly surprised by what a funny film it was. Just the other day we popped a rental copy in the DVD player and found, to our glee, that it was just as funny, if not more so, than the first time we watched it.

After much thought and deliberation about what makes the humor in Megamind stand out from other similar films (Despicable Me, I’m looking at you), I’ve come to the realization that Megamind is a lot more adult, and I dare say, sophisticated, than many other recent animated films. There’s very little slapstick comedy–instead, the humor is largely dialogue-based, and the script is brilliantly written. The comedic voice actors such as Will Ferrell and Tina Fey really went wild with it, and it shows.

This brings me to my next point: Megamind has great characters. I think almost everyone who likes Megamind would agree that you don’t watch it so much for the story, you watch it for the characters. Will Ferrell is a genius as Megamind, and I don’t even like Will Ferrell. He and his minion, referred to as, well, Minion, have some great interactions that are just hilarious to watch. Brad Pit does a perfect satire of the classic superhero as Metro Man, the hero Megamind is always at odds with. And let’s not forget Titan–the true villain of the story, whose awkward, stalker-like behavior towards the Lois Lane-inspired female lead is at times both gut-wrenchingly funny and cringe worthy. His character is the first to make me feel genuinely creeped-out by an animated villain in a long, long time. 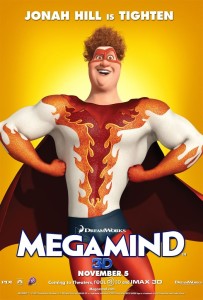 If there’s so much going for Megamind, why don’t we see more people raving about it? This is a question that plagues myself, my husband, and many other fans of the film. Granted, the film did pretty well in the box office and for its DVD release, but it still feels under-appreciated. The first reason could be chalked up to poor marketing. I, perhaps fortunately, only ever saw the teaser trailer, and not the full trailer, for the film. From what I’ve heard in cyberspace, subsequent trailers basically give away a main plot point of the film, leaving little up to the viewer’s imagination before they actually go see the movie.

Megamind seems to be plagued from start to finish with bad advertising decisions, as even with the DVD release we can see major discrepancies in the representation of the film from just the DVD cover alone. First and most notably, Megamind doesn’t have a goatee anywhere on the cover. Come to think of it, in almost all of the promotional material he appears sans goatee. In the film, he clearly has one. This may seem like a cosmetic mishap, but I think it appropriately illustrates the lack of attention that was spent on advertising the film. Not only that, the Minion on the back cover of the DVD is shown carrying a bazooka, something that also never appears in the film. What gives?

Perhaps Megamind just wasn’t released at the right time. At first glance, it appears to have many similarities with Despicable Me, which seems to have done much better in the box office. Maybe it was too smart for its own good. While advertised as a relatively average kids’ film, Megamind has a sensibility that I’m sure many adults would appreciate, but perhaps alienates some of the younger viewers.

If anything, I urge anyone who enjoys a good superhero film to rush to your video store and rent Megamind as soon as you can. It puts a great spin on the traditional superhero flick, in more ways than one. And to anyone else who enjoys a good laugh–I can’t guarantee you’ll love the sense of humor Megamind brings to the table, but if you like Will Ferrell, I see no reason why you won’t be charmed by Megamind’s character, even if he is an animated blue alien.

Have you seen Megamind? Love it? Hate it? Let me know in the comments! And if, after reading this, you’ve been inspired to check it out for yourself, please let me know what you think! Thanks for reading!