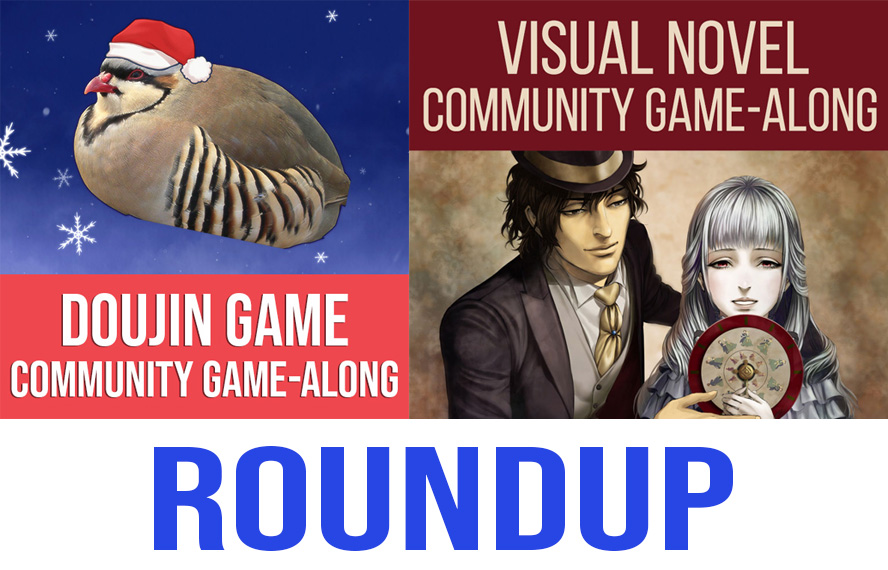 It’s time for a long overdue roundup of the November and December 2018 Community Game-Along themes! There were a lot of great games played over the two months, so read on if you’re looking for any new titles to add to your to-play list!

First, for November’s visual novel theme, JRPG.moe reviewed Utawarerumono: Mask of Deception , @Data_Error wrote about Digital: A Love Story at This Thing is Neat, the M Disk Gauntlet returned with Heaven Will Be Mine. Then, over at Gamer Girl Confessions, Chestnut wrote about her VNNovember gaming goals.

When your weird post at 3AM gets zero likes or retweets #Umineko #VNNovember pic.twitter.com/dxfBtlZzUC

Here is my #VNNovember game! Danganronpa: Trigger Happy Havoc! I’ve been wanting to play for a long time and I thought this month was the right time.

Moving on to December’s theme of doujin games, there were just two participants, likely due to the combination of the niche theme and everyone being busy in December. But that’s okay! That means the two participants get their own special spotlights!

First, Capsulejay at Tales from the Backlog played and reviewed Helen’s Mysterious Castle, I game I’ve personally been interested in. I had the chance to watch Capsulejay livestream some of his playthrough, and it was a ton of fun!

Meanwhile, Nitro continued his amazing work with the M Disk Gauntlet with one final challenge: Rockman 4 Minus Infinity. Rather than being an original game, this is a ROM hack by a Japanese ROM hacker named Puresabe. I’ve never played anything like it before, so it was really interesting to watch!

And with that, we’ve come to the end of the 2018 Community Game-Alongs! As you’re probably well aware, the 2019 Game-Alongs are already in full swing. Check out the full list of 2019 themes to start planning your games for the year!