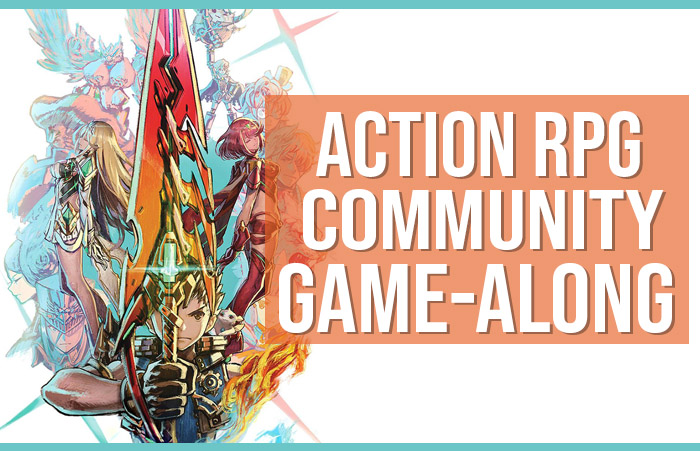 Just like a fast-paced action RPG, August is upon us! The monthly Community Game-Along events here at Chic Pixel continue on, with this month’s theme being none other than action RPGs, or ARPGs. I intended this to be a follow-up to JRPG July so folks could potentially start a JRPG that also happens to be an ARPG in July and finish it up in August, becuase I for one know I can’t finish a whole RPG in a month!

To participate in the Community Game-Along, all you have to do is play a game that fits the theme of the month. So pick up an ARPG and share your thoughts of your game using #ARPGAugust on social media! You’re also welcome to publish reviews, let’s play videos, podcasts, top 10 lists, or anything else you’d like as long as it pertains to action RPGs. Be sure to link back to this post and use the official hashtag so I can see it! Around the middle of the following month, I always do a roundup post of a sample of the submissions from the previous Game-Along, so check back to see if you’re featured!

Usually I like to give a selection of game suggestions along with descriptions of said games, but since this post is already a few days late, I’m just going to list out a few titles quicksmart to get you started! Ys: Memories of Celceta would be a great choice, and it just came out for PC last month (also available for PS Vita)! Xenoblade Chronicles 2 is the cover game of the month and can be played on the Nintendo Switch with out any knowledge of the previous Xenoblade Chronicles game. There’s also .hack//G.U. Last Recode, a recent remaster containing a whopping 3 games for PS4 and PC, and Tales of the Abyss for 3DS if you want something of the Nintendo handheld variety.

Sometimes there’s a fine line between action adventure and action RPG, but here at Chic Pixel I’m not going to turn away a submission if you have a good reason for wanting to include a certain game in the current Game-Along. That’s why for ARPG August you’re welcome to play the Yakuza games, such as Yakuza 6 for PS4, or the demo for Yakuza Kiwami 2 on PS4 (the full game launches August 28th!). The Legend of Zelda: Breath of the Wild contains character progression in the form of stat increases, so that’s enough of the RPG in ARPG to count, too!

This month, I’ll be playing Dragon’s Crown Pro on PS4 co-op with my husband. Let me know what you’ll be playing for ARPG August in the comments!