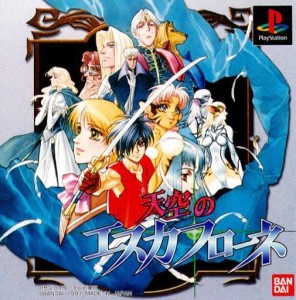 The Vision of Escaflowne is, without a doubt, my favorite anime of all time. Dating back to 1996, the series tells the story of a high school girl named Hitomi who is transported to the world of Gaea and finds herself an instrumental figure in war where men fight with superpowered mechs known as Guymelefs. Though the premise may sound similar to countless other anime, its beautiful soundtrack, compelling cast of characters, and mix of action with an art style and emotional depth typical to shōjo series make it, in my opinion, a true masterpiece. Not only is it rare to see an series created as an anime first and then adapted to manga (Escaflowne actually got both a shōjo and a shonen manga, which shows how diverse its viewership was), but Escaflowne was markedly more popular internationally than it was in Japan, making it somewhat of an oddity.

Perhaps it’s that last point that spelled disaster for the series’ video game adaptation. Whatever the reason, the Escaflowne game looks about as bad as it gets –– not only does it condense the 26 episode series into a measly 2.5 hour game, but the graphics are atrocious! See for yourself:
Of course, it should be evident from the title that I haven’t actually played the Escaflowne video game, nor do I own it. It’s been on my “most wanted” list for many a year now, and though a copy generally won’t set you back more than $30, I have yet to add it to my collection. Luckily, blog posts like these give some insight into what the game is actually like, which is enough to make any fan of the anime downright depressed.
The game reportedly plays a lot like an adventure/visual novel – there is an abundance of text, some voiced dialogue, walking around, and a few mech battles thrown in for good measure. Apparently, the battles aren’t even that much fun. The only plus I can see is that at only 2.5 hours total, it would be easy to get all of the multiple endings if you had the stomach to subject yourself to the entirety of the experience more than once.
But when all’s said and done, no amount of bad mouthing the game will deter me from my eventual purchase. Why? Just look at this limited edition set:
I’d say the box art and that rare tarot edition (modeled after Hitomi’s set) is more than enough to justify the price tag, don’t you? Of course, I’d be tickled pink if the game itself was actually enjoyable, but I doubt I’ll find many redeeming qualities in it outside of seeing how it condenses 26 twenty minute episodes into 2.5 hours.
For the curious, here’s a video of the first eight minutes of the The Vision of Escaflowne game:
Has there ever been a game you knew wasn’t going to be very good, but you bought anyway?