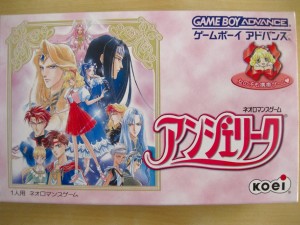 Okay, I confess –- I’m on a bit of a Game Boy Advance kick. Ever since I got my hands on a hot pink GBA micro, I’ve been itching to add a few more GBA titles to my collection. And, since we all know I’m a huge fan of otome games, it was only a matter of time before I acquired a GBA otome game.
Well, in the case of Angelique, I really should say the otome game. Angelique was originally released for the Super Famicom in 1994, and is generally regarded as the first dating sim title to be marketed specifically towards girls. Players assume the role of Angelique, a young girl who has been chosen as a candidate to become the next queen of the Cosmos. Becoming a queen isn’t easy, however –- Angelique must face off against her rival, Roselia, in a race to see who can populate their country the fastest. Both Angelique and Roselia can call upon the aid of nine elemental guardians to either increase their own country’s stats or inflict damage on their rival’s lands. The otome aspect comes from the fact that the nine guardians are hot men who are all potential love interests for Angelique and Roselia… The catch being, however, that if you choose love, you must forfeit your title as queen. 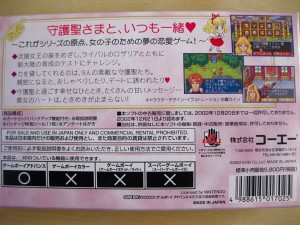 The GBA version is a direct port of the Super Famicom version, and a bare-bones one at that. There aren’t any additions whatsoever to this version, but that’s fine by me, as the portability is a great bonus and the box art, which totally screams 90s shōjo manga, is completely adorable.
I plan on doing a separate post about the gameplay, but for now I’d like to share some of the great illustrations in the game’s guide! 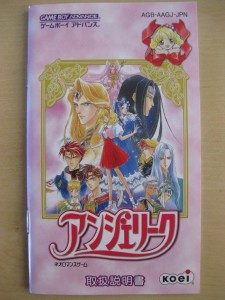 First up are a series of illustrations from the manual’s opening pages, which introduces the premise:

It’s interesting to see the emphasis placed on quality illustrations inside the manual. Modern otome games have the technology to actually replicate manga/anime-style art in the games themselves, but the Super Famicom couldn’t really give the same effect, so the images in the manual really mimicked manga styles of the time.

Next up are a few guardian profiles. Each guardian has a specific element he resides over, which is generally reflected in their design and personalities.

Finally, here’s just one sample page of the instruction portion of the manual. Not quite as interesting as the above sections, as pretty much all of the pages look the same, but they’re very colorful and littered with screenshots and quaint illustrations. 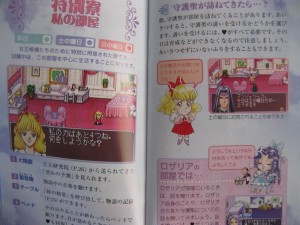 Overall, I’d say it’s a pretty nice manual! In an upcoming post, I’ll talk about my first playthrough of the game (Ever! Can you believe it?). Do I choose to become queen, or elope with one my guardians? Stay tuned!

By the way, have I ever mentioned that I’m complete rubbish when it comes to making up titles for these posts? I probably would’ve had this posted days ago if it weren’t for the fact that I couldn’t come up with a witty title. I’ve toyed with the idea of doing something similar to The Gay Gamer’s Acquisition #123 series, but I don’t really plan on posting every time I get a new game… Any thoughts/suggestions? Leave them in the comments!