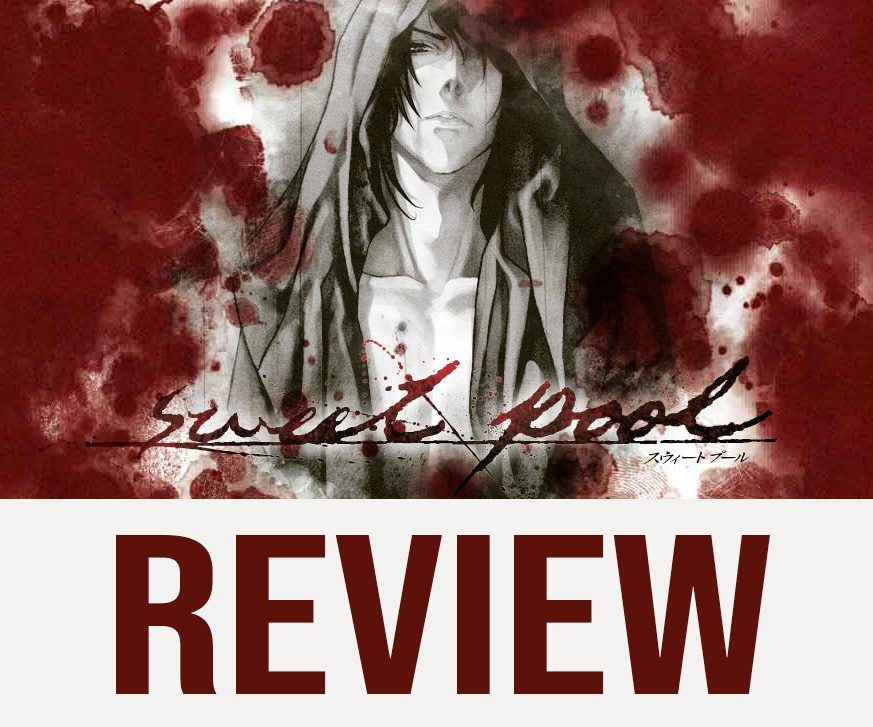 As someone who played and was fascinated by the similarly notorious Saya no Uta a few years ago, I’ve always been intrigued by Sweet Pool. The story centers around Youji, a high school boy who was held back a year due to illness and is only just returning to school. But just as he hopes his health is starting to look up, strange, unexplainable things start happening to his body, and his stoic classmate Tetsuo seems to be taking an odd interest in him. Between him, the food-loving Makoto, and the wild, unpredictable yakuza’s son Zenya, Youji has a whole lot more on his hands than just attending classes.

Discussing the story in any greater detail would, unfortunately, spoil a lot of what makes Sweet Pool so gripping to play. I found that visually, the horror was not quite as violent or grotesque as something like Saya no Uta, but be warned that the full 18+ version does contain graphic depictions of sex, rape, and blood in sex scenes. 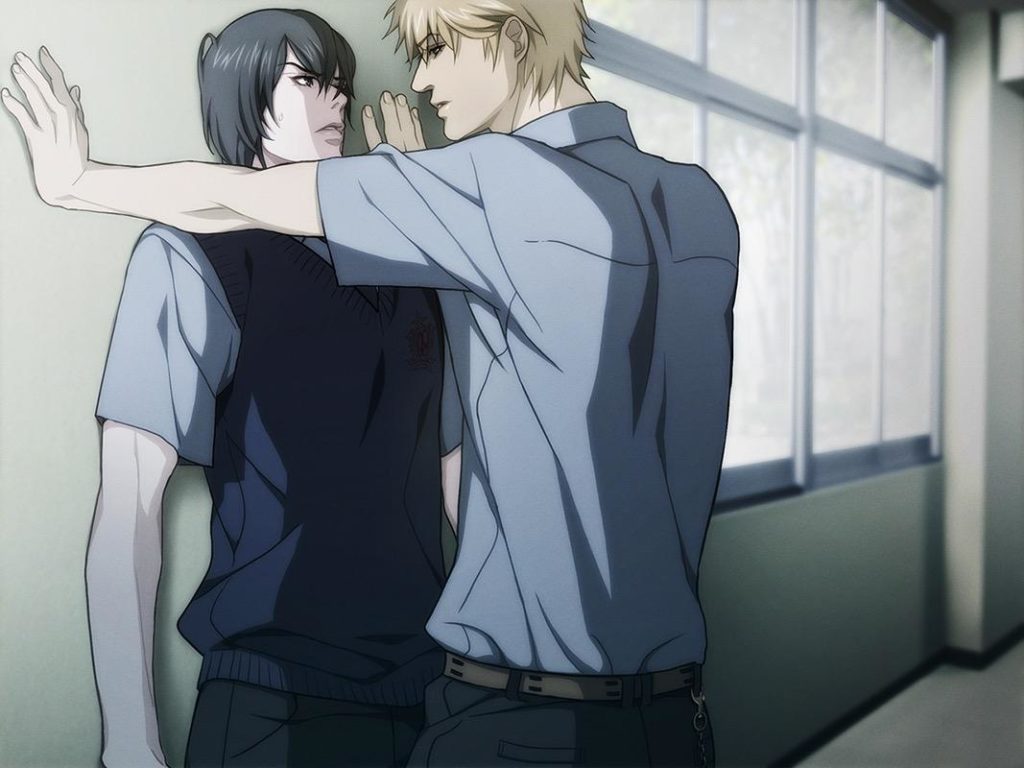 Outside of the horror content, the story is very melancholy. There aren’t any happy endings for these boys, no matter how much you might wish they could live happily ever after. Speaking of endings, though there are endings for each main male character, the story makes it clear that one partnership is the focus of the story, and that character has multiple endings, while the others only have one each.

The way the routes are determined is not through the selection of text-based options, but by having Youji choose to go with instinct (red) or reason (blue). This is quite a unique way to handle choices in a visual novel and fits well with the game’s focus on the dichotomy between human reason and animalistic instinct. 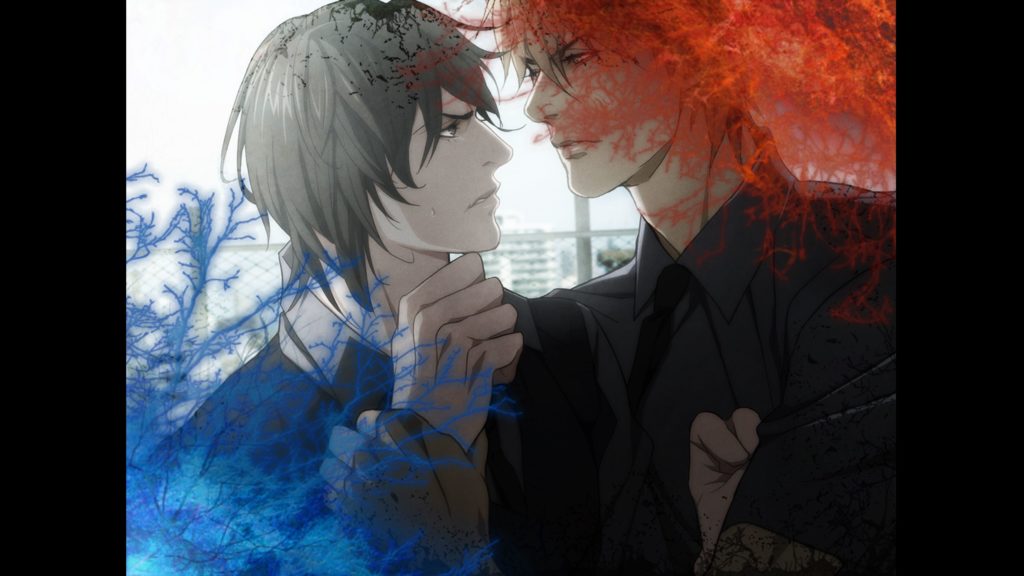 Unfortunately, however, after a while it can feel like the choices you’re making don’t really matter that much because it’s hard to see how each choice impacts the flow of the story until the leadup to each ending. As such, while I generally recommend using a guide to play a visual novel if you want to see all the routes, I especially recommend it for Sweet Pool, as it also helps to play the story in the recommended order (Zenya’s ending, Makoto’s ending, and then all of Tetsuo’s endings) and informs you of the unlock order of the endings.

In total, it took me about 13 hours to complete all routes of the game. For how abysmal the story was, I was surprised by how much I liked many of the characters by the end, despite nearly all of them engaging in some pretty abhorrent things. Speaking of the individual endings, however, I actually ended up preferring some of the alternative endings to the “grand” ending that is unlocked after completing every other route, which I would assume is meant to be the “true” ending. It’s not often I don’t like the final ending as much as the others!

In many ways, it’s hard to describe how a horrific, dark game can be so enthralling, but I often found that even when the game thoroughly disgusted me, I couldn’t stop playing. The amazing, atmospheric music definitely added to the mood, and between that, the visuals, and the solid localization, the whole experience will stay with me for a long time. 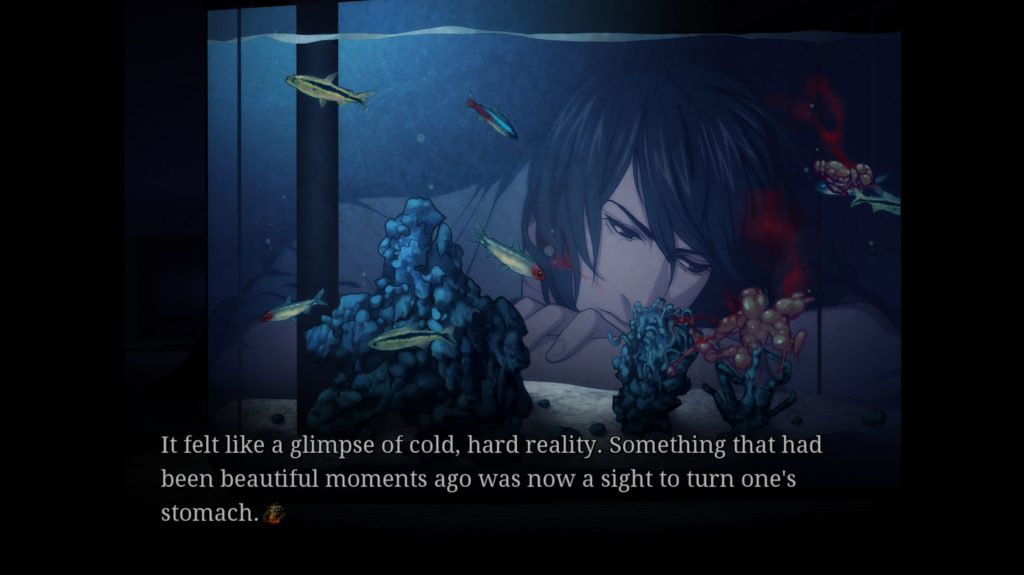 That said, there were some aspects of the game that I found difficult to reconcile. Primarily, with all of the disturbing content I’ve discussed (and others I can’t for fear of spoilers), it was hard for me to feel strongly for the relationships that developed over the course of the game. The game’s tagline is “a bond deeper and darker than love,” which really is a great way of summarizing the relationships in the game.

While it does attest to how people can come together in extreme, isolating circumstances, there was too much awful behavior going on for me to feel particularly strongly for the fate of the characters in some of the latter endings. Apologies for the fact that I can’t go any further in depth into why in this review, but if you don’t mind spoilers (or have already finished the game), stop back tomorrow to listen to my spoiler impressions in the next episode of Pixel x Pixel! 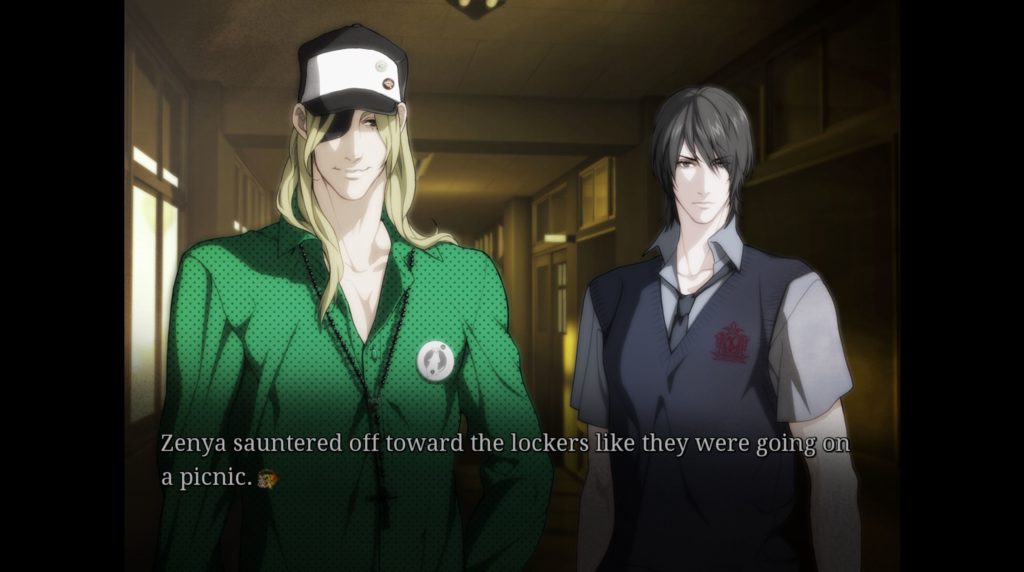 Finally, it’s important to note that this review is entirely based on the full 18+ version of the game that can be purchased on JAST Blue‘s website, as DLC with the Steam version, or from Jlist as a physical edition. The reason I emphasize this is because the standard Steam version removes all of the 18+ content.

I understand that some people may not want to experience the graphic sexual material, but in the case of Sweet Pool it is definitely integral to the overall plot. From what I’ve heard from Pixel x Pixel podcast cohost Marcus, the way the explicit scenes were removed from the Steam version is confusing and jarring. The all-ages version may be an option, but I fear much of the impact of the game would be lost without the 18+ scenes. 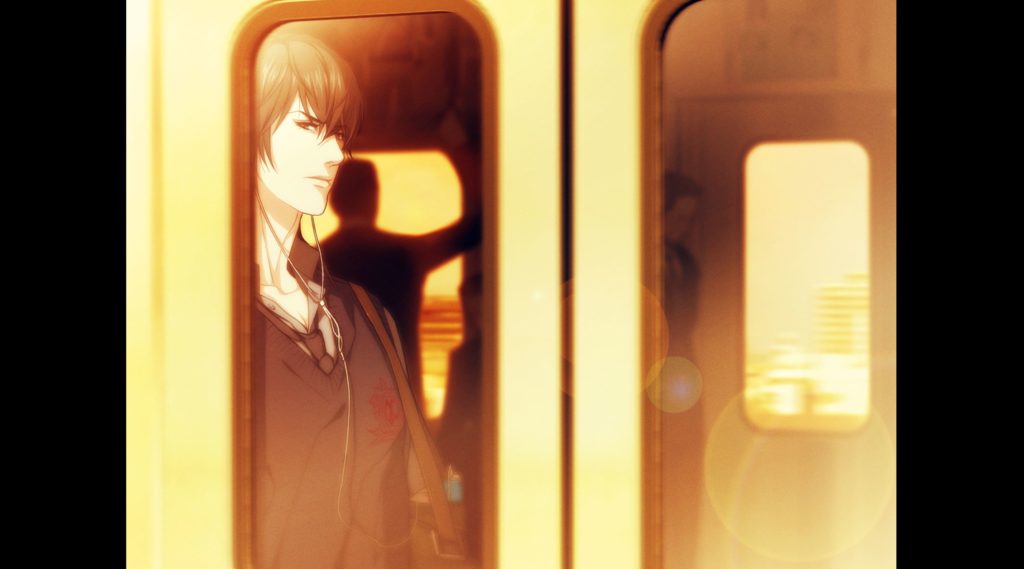 Sweet Pool is a hard game to recommend without a lot of caveats, but if you’re okay with 18+ content and are looking for a disturbing, thought-provoking horror experience, Sweet Pool is unlike pretty much any other game available in English outside of Saya no Uta. It’s quite the release to kick off JAST Blue’s Nitro+chiral localizations, and I look forward to seeing what comes next!

Note: A review code was provided by the publisher for the purpose of this review. As noted at the beginning of the review, I assisted with the game’s English PR as a consultant. The views expressed in this review are my honest opinion of the game.