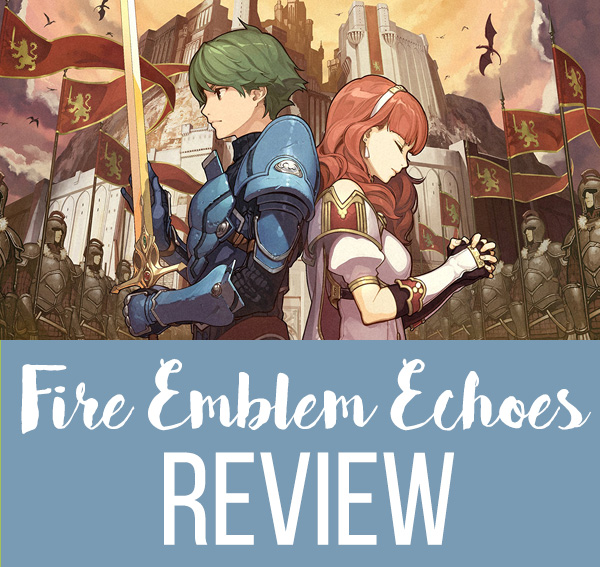 Despite hearing many good things about the Fire Emblem series, particularly after the release of Awakening for the 3DS, I’ve never played any of the games. When Nintendo announced that Fire Emblem Echoes: Shadows of Valentia would be the final Fire Emblem title to come out on the 3DS, I figured it was about time to try the series out for myself!

Fire Emblem Echoes is a remake of Fire Emblem Gaiden, the second game in the Fire Emblem series that which was never officially released in English. When Nintendo announced the remake, I was immediately thrilled to learn that Hidari was in charge of the character art. Hidari has also worked on some titles in the Atelier series, and brings distinctly soft, organic feel to the illustrations that separates the art from the other 3DS Fire Emblem titles.

The character designs themselves have been updated, as well. Here’s a comparison of one of my favorite characters, Leon, from Fire Emblem Gaiden and Fire Emblem Echoes:

Most of the designs retain the feel of the original character while giving them a bit more detail and generally updating them for a modern audience. One of the female enemy characters, in particular, had quite the transformation from Gaiden to Echoes:

Aside from the graphical overhaul, I can’t really speak to how the game has been updated for the 3DS, since I neither have experience with Gaiden or any other games in the Fire Emblem series. However, I was fascinated to learn that Gaiden, like its name suggests (“gaiden” means side story or spinoff), is slightly different from other Fire Emblem titles. While it does contain the series’ trademark strategy RPG gameplay and wide cast of characters to recruit, Gaiden/Echoes also includes dungeon exploration. In certain areas, you will take direct control of a character in third person view to move around the map and then switch back to traditional Fire Emblem mechanics for battles!

If you’re unfamiliar with the Fire Emblem series, “traditional Fire Emblem mechanics” are turn-based strategy RPG battles that take place on a grid-based map. Characters come in different classes, some of which can be selected, while other characters are locked to certain classes. While a ranged character such as an archer may be good for shooting enemies from far away, characters such as mercenaries get in and deal quick damage in succession, providing many ways to strategize. After selecting a member of your army and an enemy for them to attack, the game will switch to a third-person perspective and actually show the action playing out in 3D. It was surprisingly fun to watch my characters attack the enemy forces up close, but the fast forward button comes in handy when you want to speed up battles a bit (or are just tired of seeing the same animations over and over). 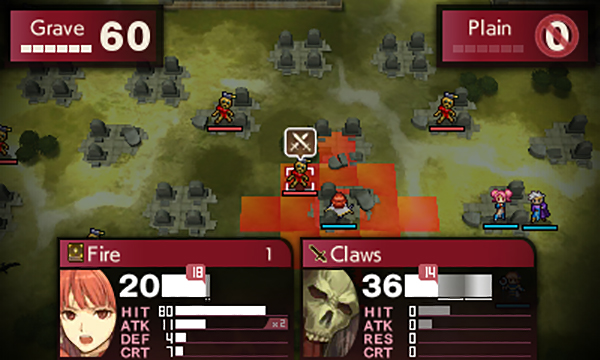 Another notable difference between Fire Emblem Echoes and other Fire Emblem titles is that there is no weapon durability or weapons triangle. As previously mentioned, since I don’t have experience with other Fire Emblem games, these weren’t things I noticed or missed, but players who are used to certain weapons having advantage over weapons of different types may find the altered format difficult to get used to.

Fire Emblem Echoes has also updated Gaiden to include support conversations, which can be unlocked by having characters fight in the same battles, next to each other, or by using healing magic on one another. When a new support rank is unlocked, the two characters have a chat that provides some depth to their relationships and activates a permanent stat boost. Many have pointed to the support system as one of the big draws of Fire Emblem Awakening and Fire Emblem Fates (who doesn’t want to pair off all their favorite characters?), but Echoes‘ support conversations feel more like a neat but overall underwhelming addition. 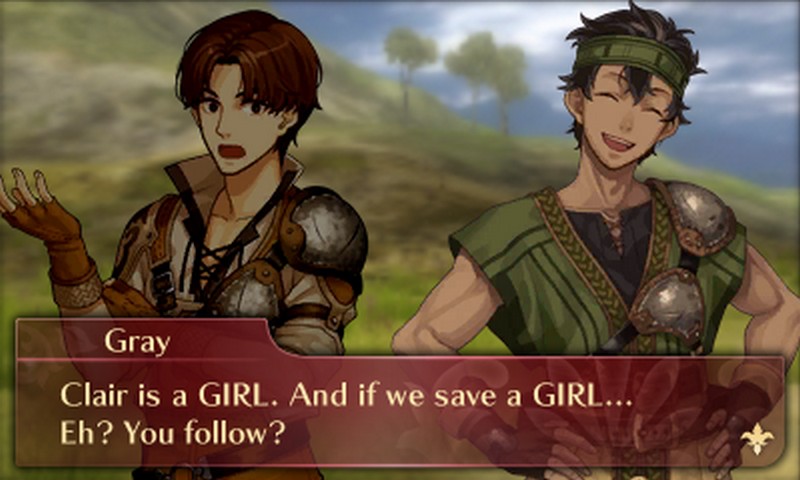 I never went out of my way to unlock support conversations for characters, as the boosts didn’t seem to be necessary, but it’s important to note that I played the game on normal difficulty with permadeath turned off. The fact that when a character dies in battle, they’re dead forever is a mainstay of the Fire Emblem series. However, since Fire Emblem Awakening, the games now have a casual mode, which means characters that die in a battle will simply revive once it’s over. I understand that some may feel that this waters down the game to the point that it doesn’t present much of a challenge (especially when playing on normal difficulty), but for players who don’t want to continuously bang their heads against ultra-tough battles, casual mode takes away one of the major hurdles of getting into the series. 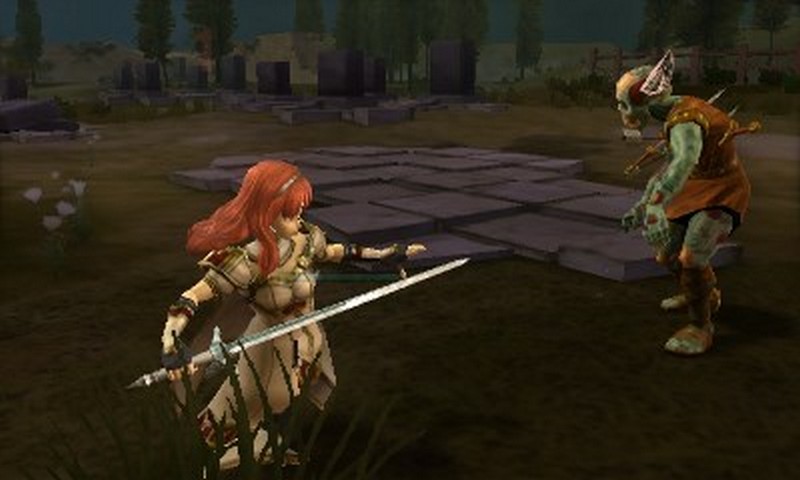 And while there isn’t as much as an emphasis on support conversations in Fire Emblem Echoes as the other recent entries in the series, I found it to be a surprisingly charming strategy RPG. The story, which has you switching between the armies of two childhood friends that find themselves on different sides of a war, is engrossing and well-written. In particular, the English localization brings a lot of color to the text, and the voice actors really make the dialogue stand out! That’s not something I often say about English voice acting, but I never once wished I was playing with Japanese audio instead (Okay, that’s not entirely true – I did learn that the male protagonist Alm is voiced by 9S’ Natsuki Hanae, which I would love to hear!). Apparently this is the first time a Fire Emblem game has had fully voiced dialogue, and it really makes reading through the story enjoyable. The soundtrack is lovely, as well! 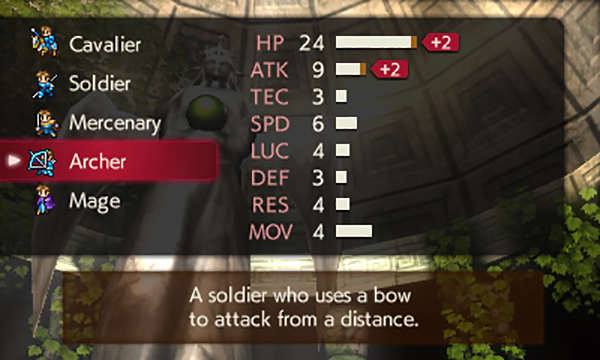 At the time of this review, I’m a little over 30 hours into the game, and have started to run up against some more difficult battles. Of course, since I’m playing with permadeath off, I could just brute force my way through fights as long as at least the main character stays alive. However, despite playing on casual, I find myself wanted to keep as many of my characters alive as possible so they get experience at the same rate as characters that regularly last through battles. There are many things to juggle in order to have the best army possible, including weapon abilities (which unlock when a weapon is equipped to a character and used in battle), character class strengths and weaknesses, fatigue (sometimes you have to feed your troops to keep them at their best!), and maps with different types of terrain. I love that you can make the game as hard or as easy as you want!

There is plenty of strategy to be found in Fire Emblem Echoes, even without the bells and whistles of a modern Fire Emblem title such as Awakening. But if you’re intimidated by hardcore strategy games, there are also great options to accommodate players who want to experience the story and aesthetic of Echoes at a less frantic pace. It is possible that recent fans of Fire Emblem looking for more of what Awakening and Fates had to offer, particularly in terms of support conversations, may be disappointed by Fire Emblem Echoes. However, as someone new to the series, I throughly enjoyed Fire Emblem Echoes as a strategy RPG and an introduction to the Fire Emblem universe. I honestly can’t wait to play more!

A product code was provided by Nintendo of Australia for the purpose of this review. If you decide to pick up a copy of the game, using my Amazon affiliate link will earn me small commission that goes back to keeping the site running. Thank you for your support!