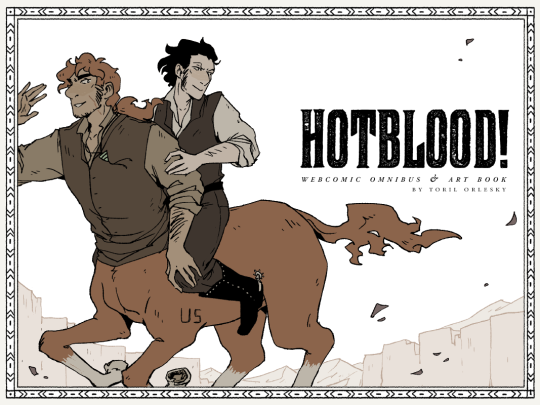 After two and a half years, webcomic Hotblood! has finally come to a conclusion, and creator Toril Orlesky has launched a Kickstarter to celebrate! If successful, the Kickstarter will fund an omnibus release of all four chapters of the comic, including new a new prequel and epilogue. As of this post, it has already reached its $24,000 goal, but if you’re a fan of Hotblood!, centaurs, the wild west, or just great comics in general, you’ll want to get in now to grab some of the awesome Kickstarter-exclusive rewards!

Toril’s comic about centaurs in American the Old West takes inspiration from a variety of sources, including est em’s centaur manga, which happens to be the subject of my upcoming paper in New Voices in Japanese Studies. It goes without saying that I was immediately smitten with Hotblood!, and I’m honored to have been able to chat with Toril a little more in depth about est em and the centaur aspects of Hotblood! 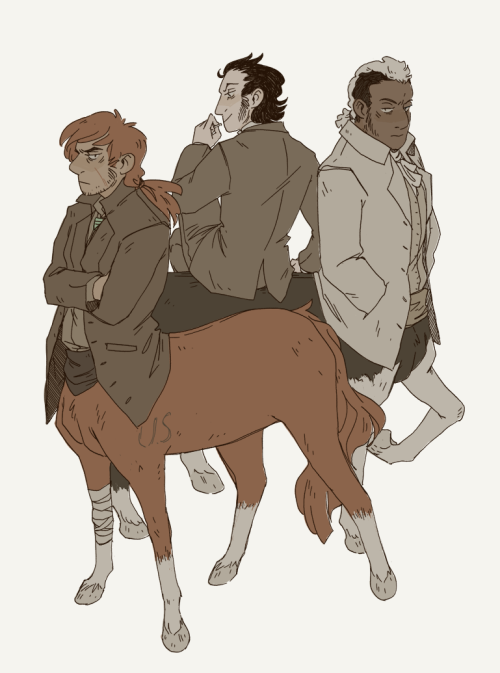 A: I’d love to hear more about your inspirations for Hotblood!. What initially drew you to centaurs? Why did you include centaurs in your story and not other mythical characters?

T: I’ve loved horses since elementary school, so I think that’s a big part of it, haha! I still remember my neighbor showing me how to draw a horse in third grade– that was the first time I wanted to learn how to draw anything. I’ve also always been into Greek mythology, I saw Spirit: Stallion of the Cimarron in theaters when it was released, Black Beauty was one of my favorite books growing up… when I started planning Hotblood! I was very into shows like Suits and Hannibal… that is to say, morally ambiguous stories with crime and homoerotic relationships that ultimately failed to deliver on the homoeroticism. I was particularly affected and annoyed by BBC’s Sherlock. At the risk of over-educating anyone, in Sir Arthur Conan Doyle’s writing, James Moriarty has a right-hand man: the veteran sniper Sebastian Moran. He appears in only one story– The Empty House– but I became fascinated by the character. I started drawing him as I imagined he would be if he was written into contemporary London and, yes, shipping him with Moriarty. Other members of the Sherlock fandom had similar ideas, and to make a long story short I lost interest, but I still wanted to explore the boss-subordinate/romantic relationship dynamic between two morally ambiguous criminals. That’s where my protagonists, Asa and Rook come from, although Asa is nowhere near as clever as Moriarty.

As for the centaurs… I wanted to write historical fiction, not fantasy! I wasn’t interested at all in developing a system of magic or changing the rules of the world beyond the immediate infrastructure and social adjustments needed to accommodate a race of quadrupeds. I chose centaurs over werewolves, satyrs, dragons, or anything else because horses and Westerns go hand-in-hoof, as it were. 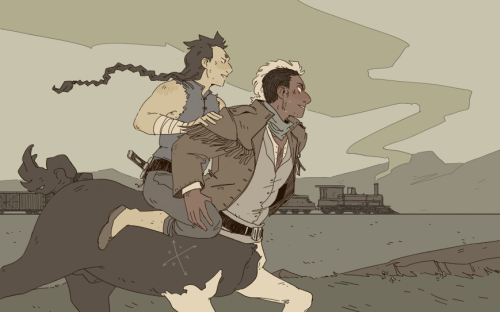 A: You mention in your FAQ that est em’s Hatarake, Kentaurosu! and equus were influential to Hotblood. Aside from the obvious fact that they also feature centaurs, what was appealing to you about these works?

T: I love est em’s style of storytelling– it’s slice of life, but more importantly: the vignettes in her books are about character relationships above anything else. Sometimes an entire chapter is just one conversation, and I really respect how much emotion she’s able to convey about her characters in a short amount of time! Of course, I also admire her technical skill and her use of negative space.

A: est em and a number of other recent manga artists (for example Kei Murayama’s A Centaur’s Life, Okayado’s Monster Musume: Everyday Life with Monster Girls) have written stories featuring centaurs in everyday and/or otherwise historically accurate settings. Hotblood! is very similar in this regard. Why do you think the juxtaposition of mythical centaurs in otherwise normal situations is so appealing?

T: The same reason stories like Spirited Away, Teen Wolf, JoJo’s Bizarre Adventure, and so on are wildly popular… people like fantasy, but it’s far more relatable when the fantasy elements are juxtaposed with a familiar setting. It’s one thing to read a myth about centaurs from ancient Greece, but quite another to read about how one might commute to work in present-day Tokyo! Centaurs are especially fun because they’re truly strange– it’s not just a matter of avoiding humans on a full moon, they’ve got to deal with being literally half-horse every day. You can’t hide that! The mundane details of how they would function in society– standing desks? Farriers? Can they fit in a subway car? Is it appropriate to ask a centaur for a ride?– that’s what interests me.

A: Do you plan to write further stories about centaurs after Hotblood!, or are you looking to move on to different types of projects?

T: Initially I was determined to leave centaurs behind after Hotblood!, but these days I’m open to the possibility that I might draw some short stories set in the same universe, either with the existing cast or brand new characters. I won’t make any promises, though– I’ve got a a queue of fan comics and other projects to take on first!

Well, I will always be ready for more centaurs! Thanks again to Toril for chatting with me and offering so many interesting insights into Hotblood!. You can read Hotblood! in its entirety for free online, but if you’d like to get a physical copy of the omnibus or the exclusive companion art book containing character material, world building, and more, be sure to back the Kickstarter before it concludes on May 15th!

Disclosure: I am a Hotblood! Kickstarter backer. I mean, homoerotic centaurs… How could I not?!