Hatsune Miku and her Vocaloid friends are relatively unknown outside of their homeland of Japan, but have a steadily growing western fanbase that even counts Lady Gaga in their ranks. For those who aren’t familiar, Vocaloids are a series of Japanese voice banks created from actual singers that can be used to create completely original music and vocals from scratch. Each Vocaloid voice bank is represented by a unique character, with Hatsune Miku undoubtedly being the most famous due to her iconic turquoise twin tails and vibrant, youthful voice.

The communal aspect of Vocaloids is one of the reasons why they’re so interesting – what songs become hits are entirely up to the fans, and even what Hastune Miku wears in her music videos is conceived by fans. So, while the Vocaloid rhythm game series Hatsune Miku: Project DIVA is ultimately developed and published by Sega, the songs included are all created and popularized by the fans themselves! 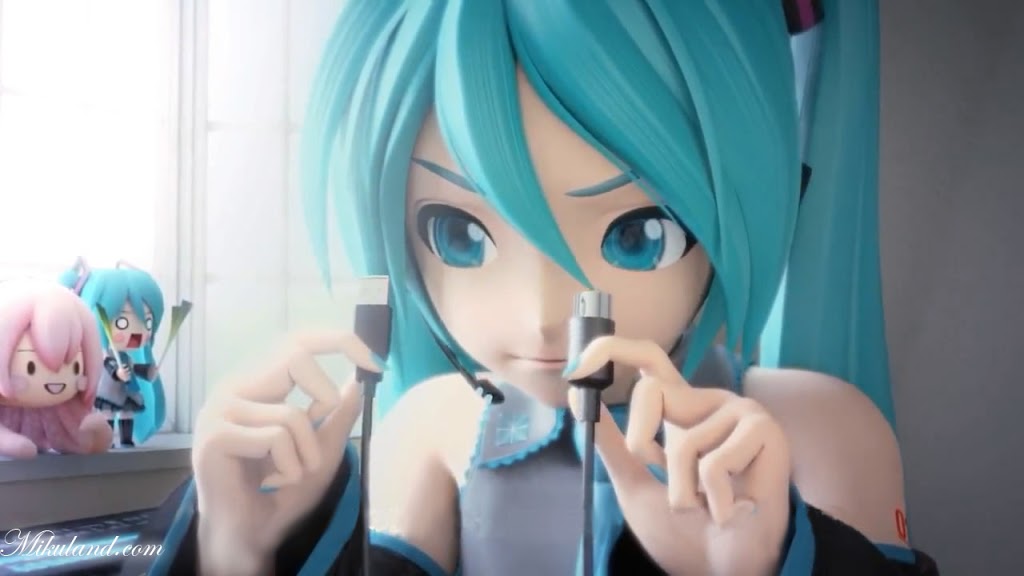 Hatsune Miku: Project DIVA f for the Vita and its companion, Project DIVA F for the PS3 are the first entries in the series to see an English release. Eager to support the localization, I picked up Project DVIA F when it first came out, but found it difficult to get into on the PS3. I love rhythm games, but ultimately find them much more satisfying on handhelds, which is why I was thrilled when Sega announced that they would be bringing over the Vita version a few months later.

Project Diva f on the Vita is everything I love about rhythm games and more. Though I can understand the idea of listening to music sung by a computer program might be off-putting at first for some, I personally found the vast majority of songs toe-tappingly fun, and I highly suggest checking out a few of YouTube to get a taste of the range of musical styles represented by Vocaloid songs. 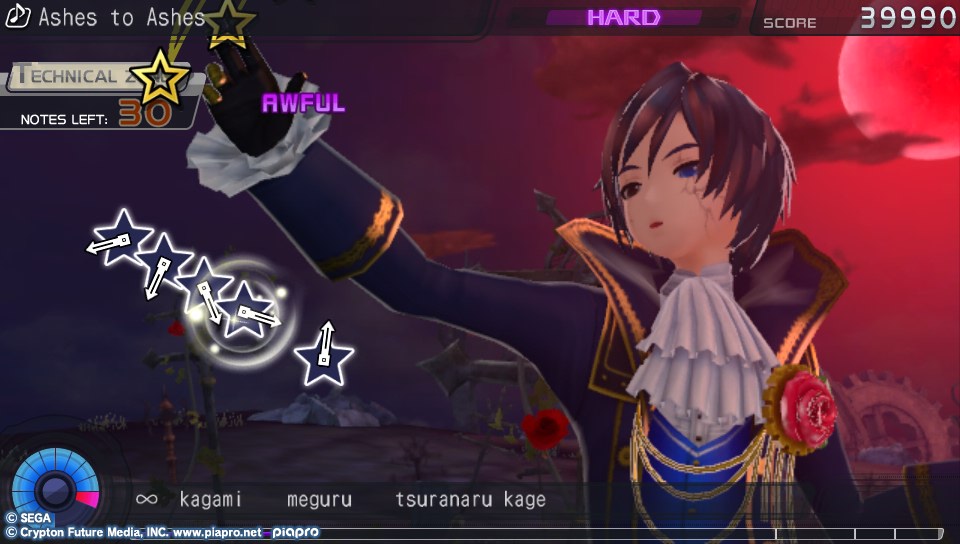 Of course, catchy songs are only half of what it takes to make a good rhythm game. Luckily, Sega has married a quality Vocaloid song library with precise mechanics and just the right difficulty curve to keep me wanting to reply songs to achieve higher scores and perfect tougher difficulties. The easiest mode has players tapping only the O button in time with on-screen prompts, but more buttons are used with each difficulty increase until all face buttons need to be utilized at break-neck speed in order to pass a song. The harder difficulties definitely aren’t for the faint of heart, and the colorful, frantic music videos that play for each song make it easy to get distracted and miss a beat, but even the most rhtyhm-inept players should be able to enjoy the easiest difficulty.

In addition to the face button prompts and special colored arrows that indicate to the player to press both the directional button face button of the corresponding color simultaneously, there are also star notes that require players to quickly swipe the front or back touch screen with a finger. While this may sound easy in theory, the Project DIVA series is known for its dynamic positioning of button prompts that dance across the screen as the song plays, meaning concentration is extremely vital to following the note trajectory. 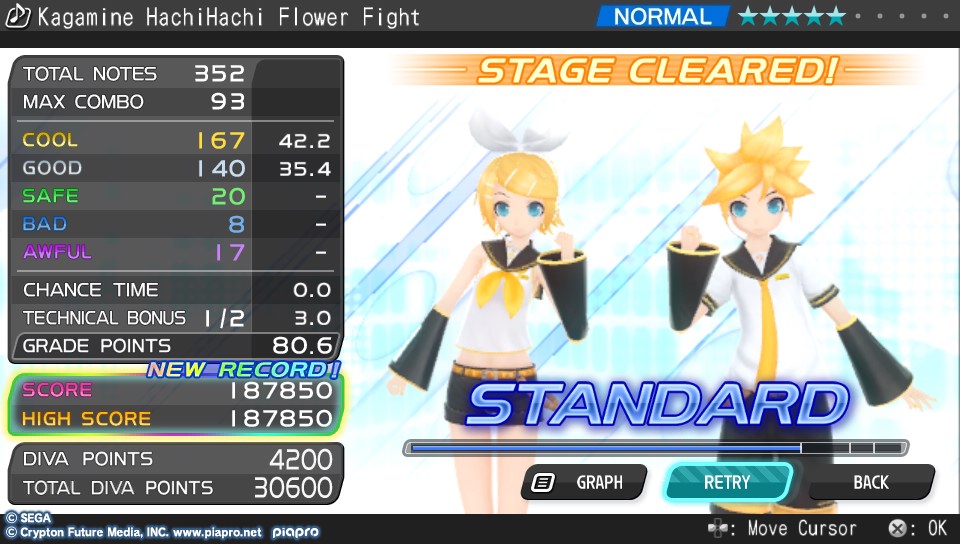 While the core of Project DIVA f is undoubtedly the rhythm gameplay, there is a huge amount of peripheral content in the form of customizable outfits and rooms, a song editor, and AR photo booth that will appeal to Vocaloid fans as well as those who enjoy customizing their game experiences. I never spent much time interacting with the five Vocaloids in their Diva Rooms, which acts as a mini simulation game that requires you to give your Vocaloids presents and “pet” them Nintendogs-style to increase their affection for you, but it’s a nice touch that can act as a nice break from the rhythm game aspect of Project DIVA f for those that want it.

Despite the lavish praise, I do have a few niggling annoyances with the game. The loading screens are too long and annoyingly frequent, and it always feels like it takes a few clicks too many to get to the selection I want in the menus. Since the PS3 version came out first with more songs, it’s a shame that the whole track list isn’t included in the initial price of the Vita version, but since the game only sets you back $30 and the DLC costs $10, it still ends up being $10 less than the retail price of the PS3 version (though, keep in mind, the Vita version is PSN-only). Finally, I couldn’t help but notice that the game isn’t running on the Vita’s native resolution, at least in the menus, as the character models look undoubtedly fuzzy when compared with the PS3 version. Thankfully, however, this isn’t noticeable during actual gameplay.

In all honesty, Hatsune Miku: Project DIVA f is one of my favorite Vita games to date. It’s not without some imperfections, but it looks and plays wonderfully on the handheld, and is a must-have for any Vita-owning rhythm  game fan. I’m thrilled that the PS3 version did well enough for Sega to bring over its handheld counterpart, as it really is where this series thrives. Even better is the fact that they’ve already announced localizations of the PS3 and Vita versions of Project DIVA f 2nd for later this year, making the mid-year slump a great time to dive into the series in preparation for the sequel. I guarantee that if you give it a try, you’ll get at least one of the songs stuck in your head for days!

Disclaimer: A code of Project Diva f was provided by the publisher for the purpose of this review.