Love is in the air in Final Fantasy XIV: A Realm Reborn! As expected, February’s seasonal event is a tie-in with Valentine’s Day. In keeping with the game’s tradition of “re-imagining” the names of real-world holidays for the game world, though, they’ve added an “o” to Valentine… I suppose it’s meant to sound exotic? 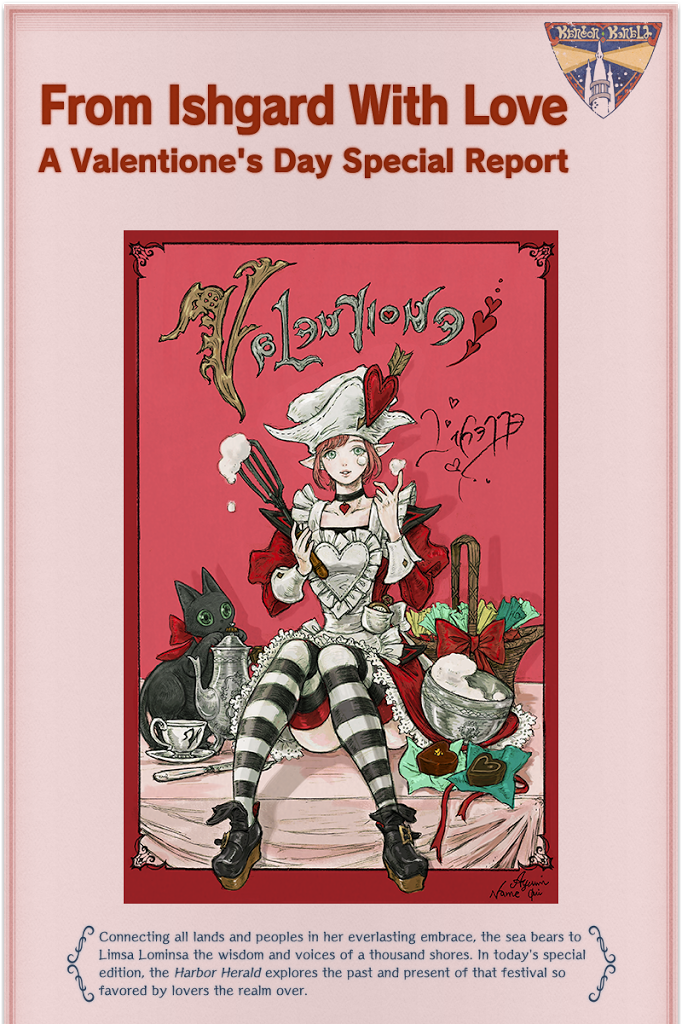 As always, the Lodestone illustration for the event is simply gorgeous. Honestly, I’d probably be happy if Square Enix did away with events all together and just posted a new illustration every month! Okay, that’s definitely an exaggeration, especially if they do more awesome outfits like the one you get for completing the Valentione’s Day quest line!

There is absolutely no combat in this event, and it’s quite straightforward, so I’m going to try to make the tutorial as snappy as possible. That means I won’t have screenshots of absolutely everything, but all the info will be here for those who want it! 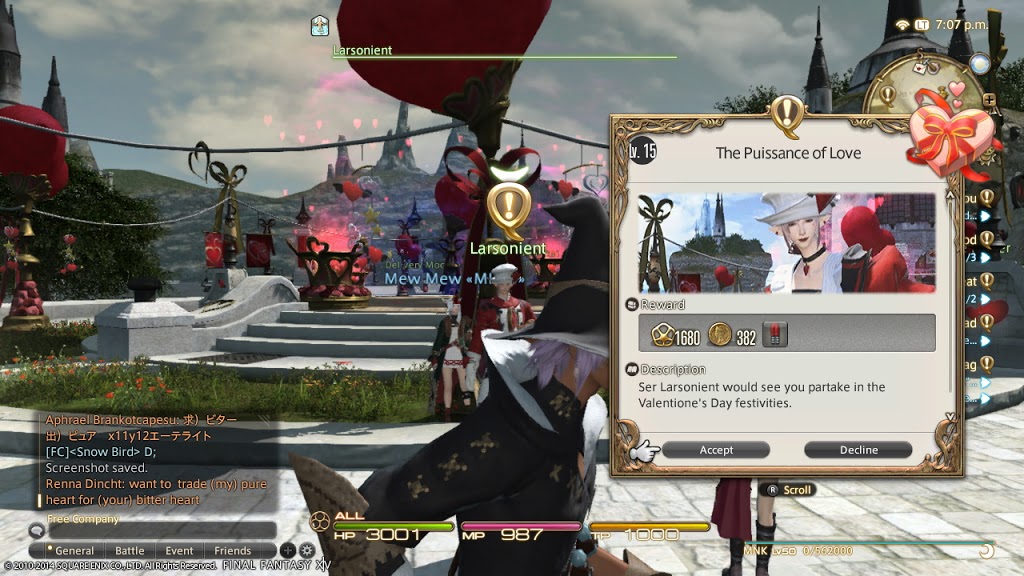 You’ll first need to speak with Larsonient, who is located at X:11, Y:13 of the Limsa Limonsa Upper Decks. As usual, the seasonal even quests are only level 15, so most people should be able to participate. After speaking with him, you’re immediately directed over to Lisette De Valentione, who gives you the first item in the Valentione clothing set, completing the quest. This unlocks three different quests, “Sweet, Sweet Love,” “Right Here Waiting,” and “Love Is a Battleground,” which require you to spread love to the inhabitants of each of the three main cities. I suggest talking with Lisette to initiate all of the quests before setting out to complete them, as it saves time in the long run. I tackled the Limsa Limonsa quest, “Love Is a Battleground” first, but it doesn’t matter what order you do them in. 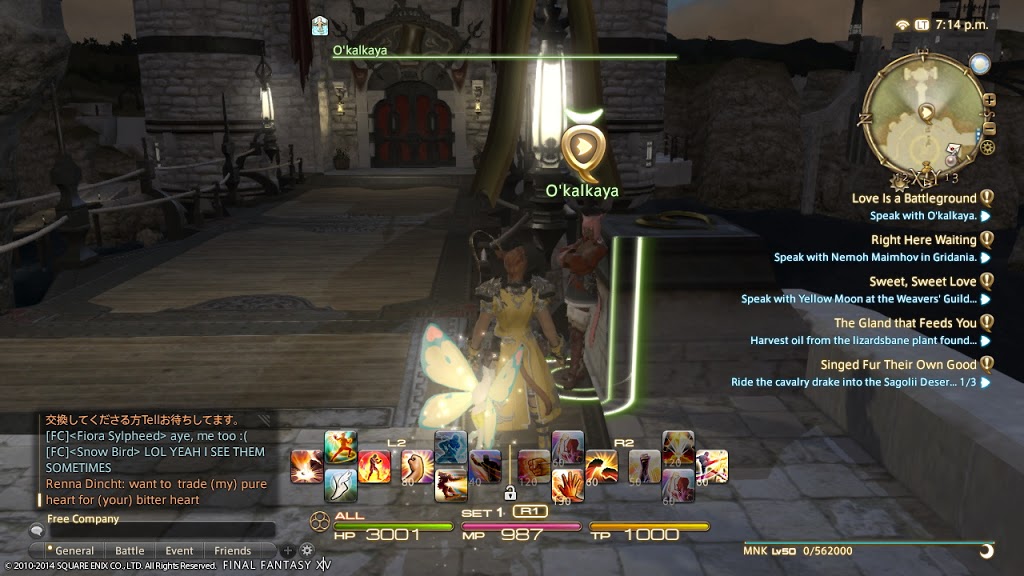 The first NPC you’ll need to talk to for Love Is a Battleground, O’kalkaya, is located right near Lisette at X:12, Y:13. The following tasks are extremely straightforward, so just follow the quest icon on your minimap. Completing the quest will net you two bitter heart chocolates if your character is male, or two pure heart chocolates if your character is female. Hold onto these for later! 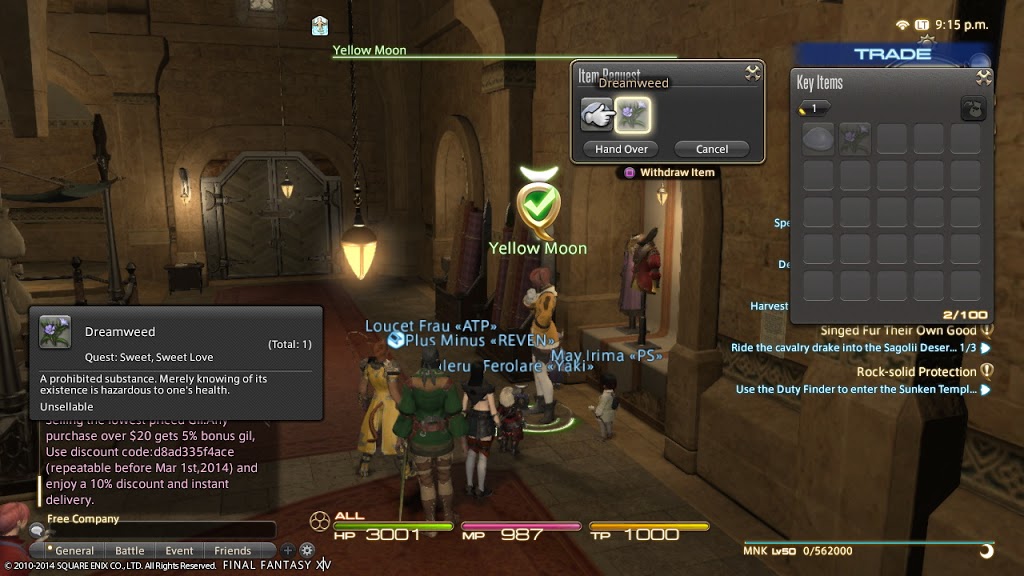 Next, let’s head over to Ul’dah! Again, the order in which you do these quests doesn’t matter, as long as all three get done. The NPC you need to speak with to initiate the Sweet, Sweet Love quest is Yellow Moon, located at X:14, Y:13 in the Weaver’s Guild. She wants a bunch of odd ingredients for her concoctions, so you’ll need to speak with all of her admirers to acquire the required items. The first pair of admirers are located at X:11, Y:11, and the second pair are at X:10, Y:8. Completing this quest will reward you with two more chocolates. 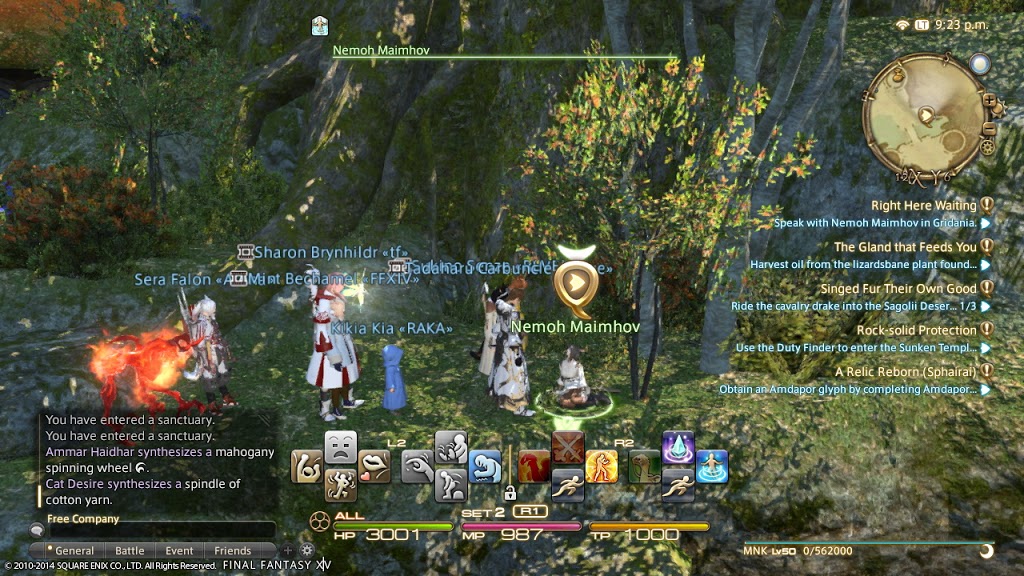 Finally, it’s off to speak with Nemoh Mainhov at X:12, Y:6 in Gridania for Right Here Waiting. She’s looking for her lost lover, so you’ll need to go talk to three men who look like him around X:9, Y:9. After returning to Nemoh, you’ll then need to head to the North Shroud to Gwayne at X:28, Y:26. After jumping back and forth between Gridania and North Shroud, you’ll finally complete the quest for another two chocolate hearts. Now you can finally return to Lisette De Valentione in Limsa Limonsa! 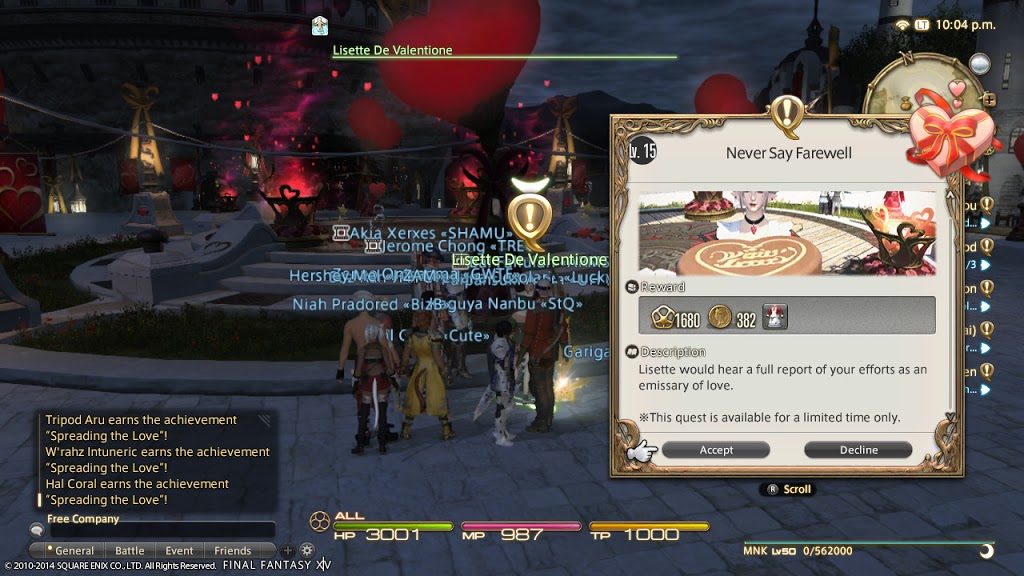 Your final quest, Never Say Farewell, requires you to turn in one bitter chocolate heart and one pure heart chocolate to Lisette. The only way to do this is to trade with a character of the opposite gender who has also completed the first three Valentione’s quest. If you hang around Lisette, you should find others looking to trade, so be sure to let everyone know in the chat! Since I did the event quests the day they were released, there were plenty of people around looking to trade. Be sure to only trade one of your chocolates for the one you need to complete the quest, though, as you’re going to need the rest to trade for the remaining items in the Valentione’s outfit! Completing the Never Say Farewell quest will get you your Valentione’s top and an achievement for finishing the seasonal event. 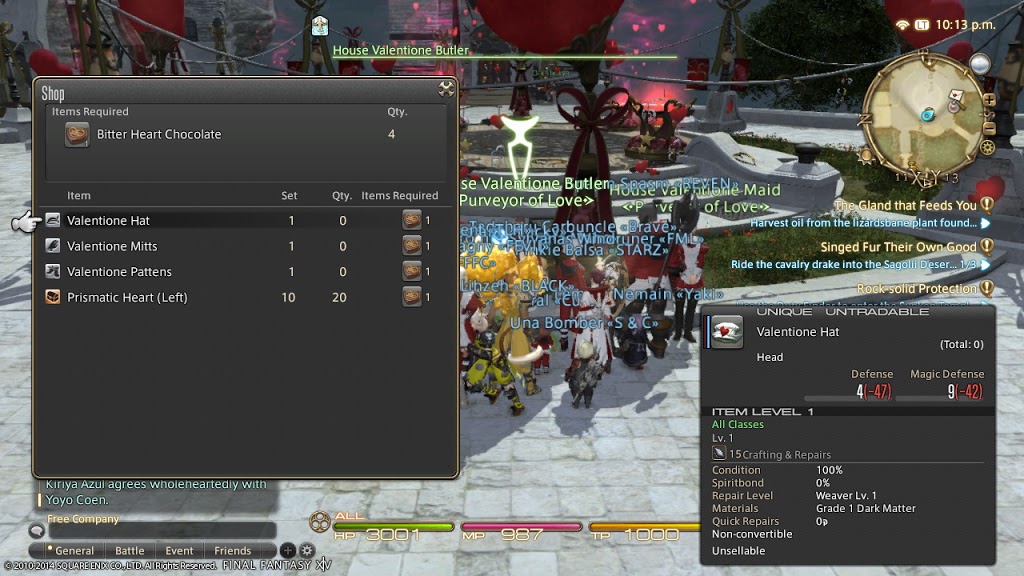 Now, the in the areas decorated for the seasonal event in each of the three cities are a House Valentione Butler <Purveyor of Love> and a House Valentione Maid <Purveyor of Love>, but the most convenient ones to access are located right near Lisette in Limsa Limonsa. No matter where you find them, make sure to trade your chocolates to the Butler for the rest of the Valentione’s set and purchase some limited-time items from the Maid! The left and right Prismatic Hearts are very cute for using in screenshots with friends, so I made sure to stock up. 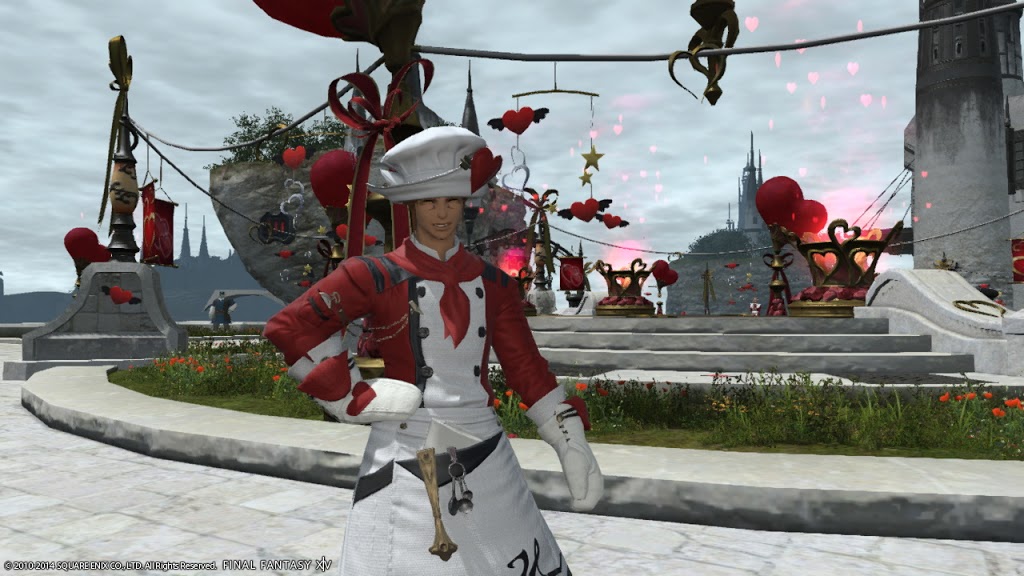 I’m really liking how Square Enix is switching up the formula with each event quest – the last one was very FATE-centric, so it’s a nice change to not have to do any FATEs this time. And look at that outfit! All the running around was certainly worth it to see Chive in such cute garb. 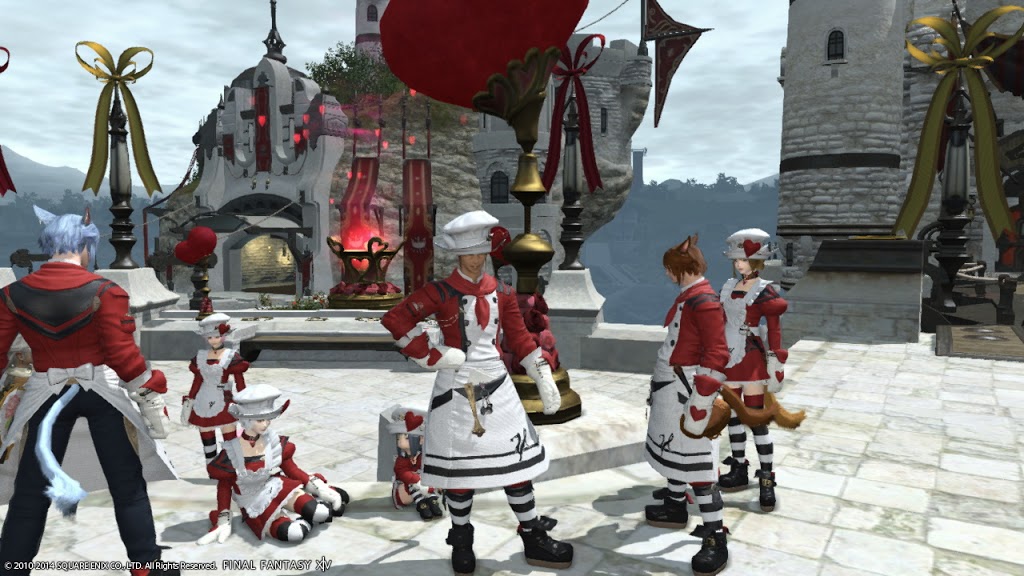 The Valentione’s decorations themselves are nothing special, though they are featured in every city. I don’t think they really compare to the winter holiday decorations, but I suppose you can’t have both a great outfit and great decorations, eh? At least I got to spend some time with other folks in their Valentione’s gear. My only complaint about the event is the fact that it was a requirement to exchange chocolates with someone of the opposite gender in order to complete the quest. Really, Square Enix, it’s 2014!

As I’ve said before, it’s great to see monthly events, but I’m not sure how much longer Square Enix will be able to keep it up… I wonder what the next seasonal event will be?