Hell of a title, eh? Unfortunately, it couldn’t be helped, as Square Enix decided to launch two tie-in events in Final Fantasy XIV: A Realm Reborn this month: a Dragon Quest X event, “There’s Golems in those Hills!” and a Final Fantasy XI event, “That Old Black Magic.” It’s great to see near-constant events since the Lightning event began in November, but these two quests are rather short, so you should be able to knock them off rather quickly.

First, you’ll need to initiate the Dragon Quest X event in Ul’dah and the Final Fantasy XI event in Gridania, so I’d suggest hitting up whichever one is closest to you at the time. Both events end on February 3rd and won’t take you very much time at all to complete, though, so you may want to wait a few days until the initial rush is over! I started with “That Old Black Magic” in Gridania, but it doesn’t matter what order you do them in. 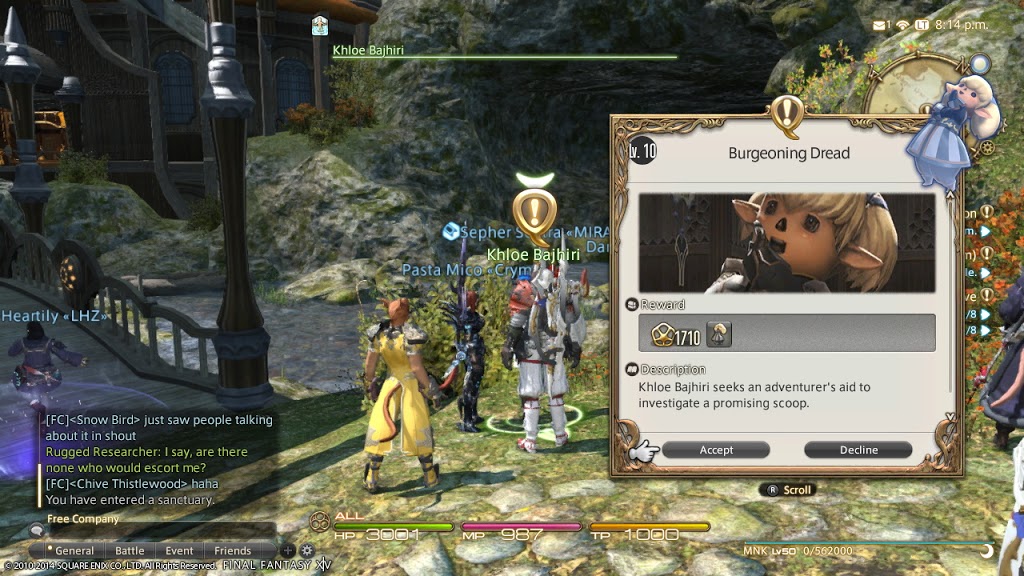 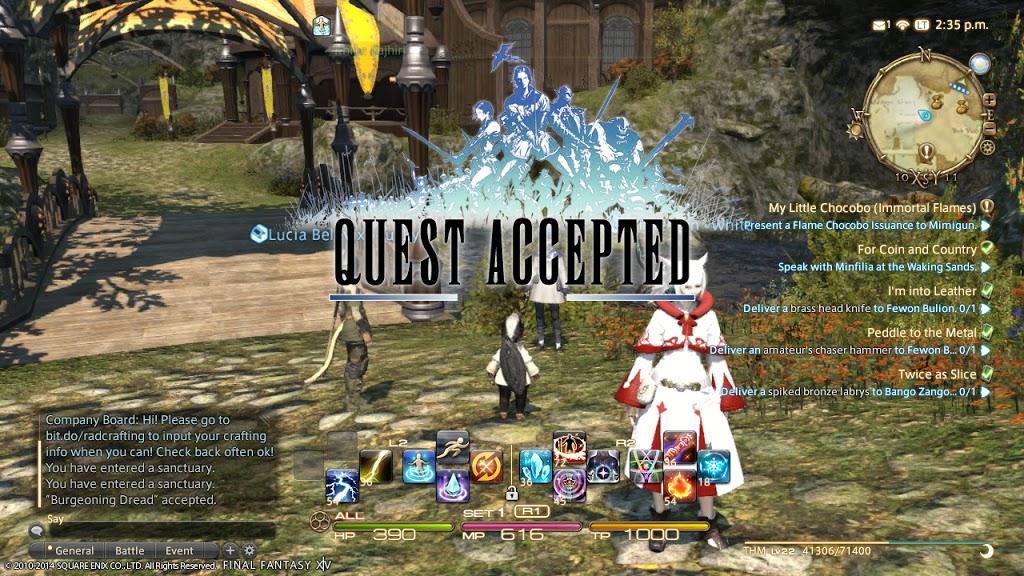 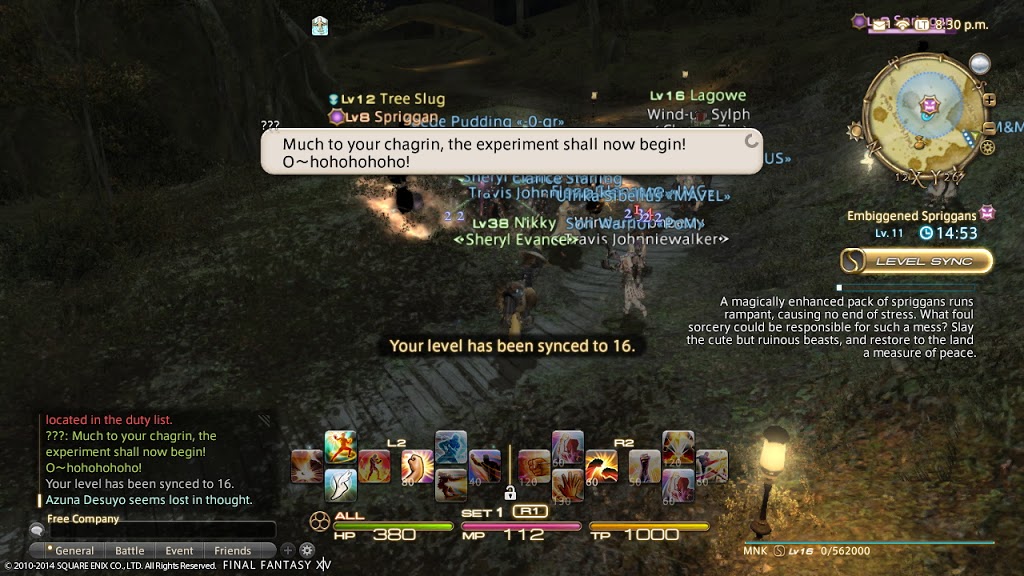 The first FATE located in East Shroud is level 11 and will find you fighting a bunch of large Spriggans, while the second FATE features the unnamed “Monstrous Sorceress” (though anyone who knows Final Fantasy XI should recognize her!). Since I did the FATEs the day the event went up, it was hard to see much of anything, and I was worried I wouldn’t get a gold medal since I wasn’t in a party. I only hit the Monstrous Sorceress a couple times, but I still got a gold medal! I’m not entirely sure, but I think you just have to participate in the event in order to get the item required to complete the quest. 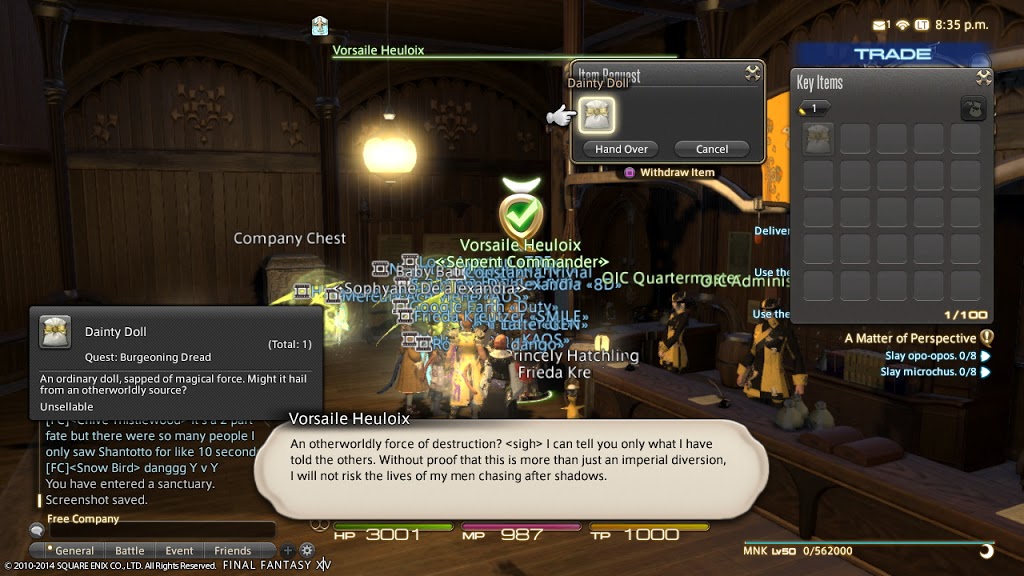 The item in question is a Dainty Doll, which you’ll need to turn in to Vorsaile Heuloix in New Gridania (X:9, Y:11). You’ll then be treated by a very fun cutscene, after which you’ll get your reward! I don’t want to spoil too much of the fun for those who will be doing this quest themselves, but here are a couple screenshots that gave me a chuckle:

After you encounter Shantotto, you’ll be gifted with a Wind-up Shantotto minion. 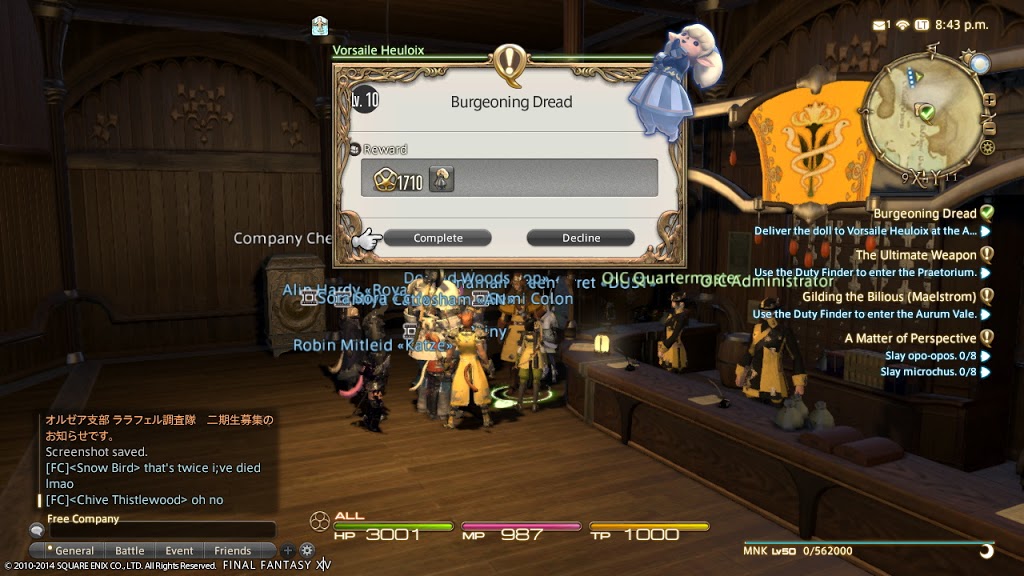 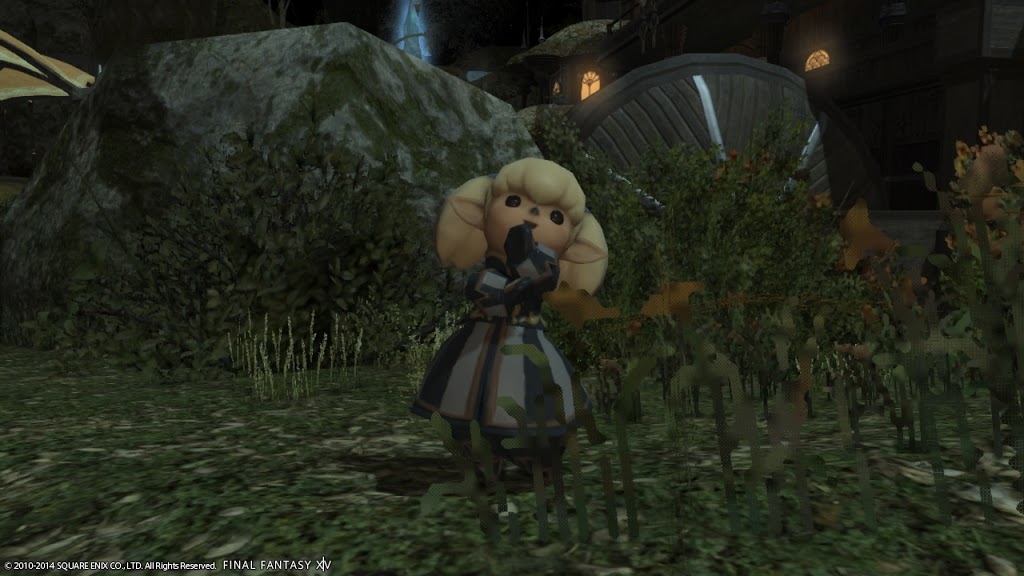 Again, it was a very simple quest, but the reward is nice! 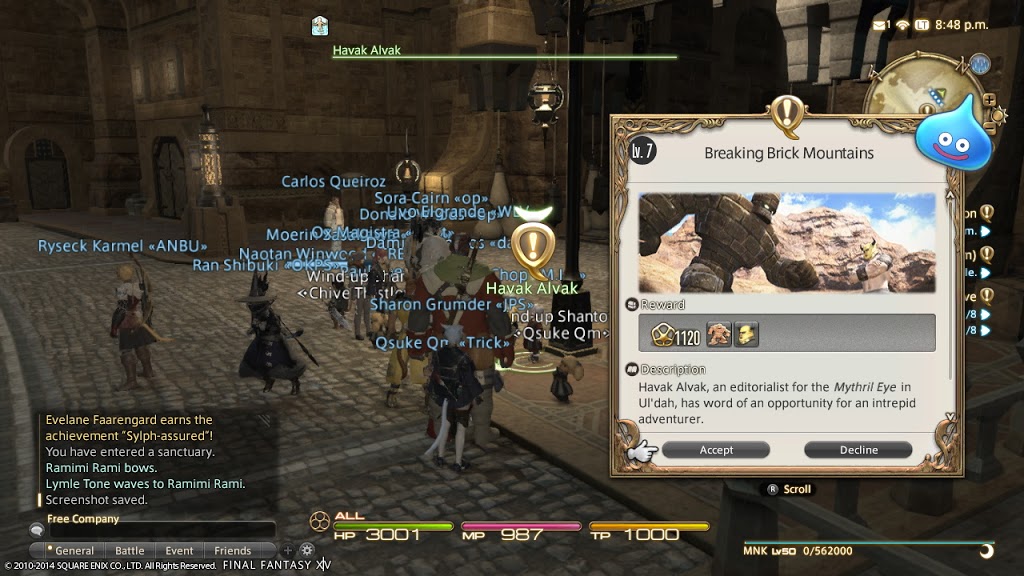 Next up is the Dragon Quest quest (heh) located in Ul’dah. Interestingly, the requirement is only level 7, which is lower than the Final Fantasy XI quest. You’ll need to go see Havak Alvak at X:12, Y:8 to initiate it, then go find the Beefy Businessman at X:8, Y:12. He’ll ask you a very important question that you must answer correctly in order to proceed: 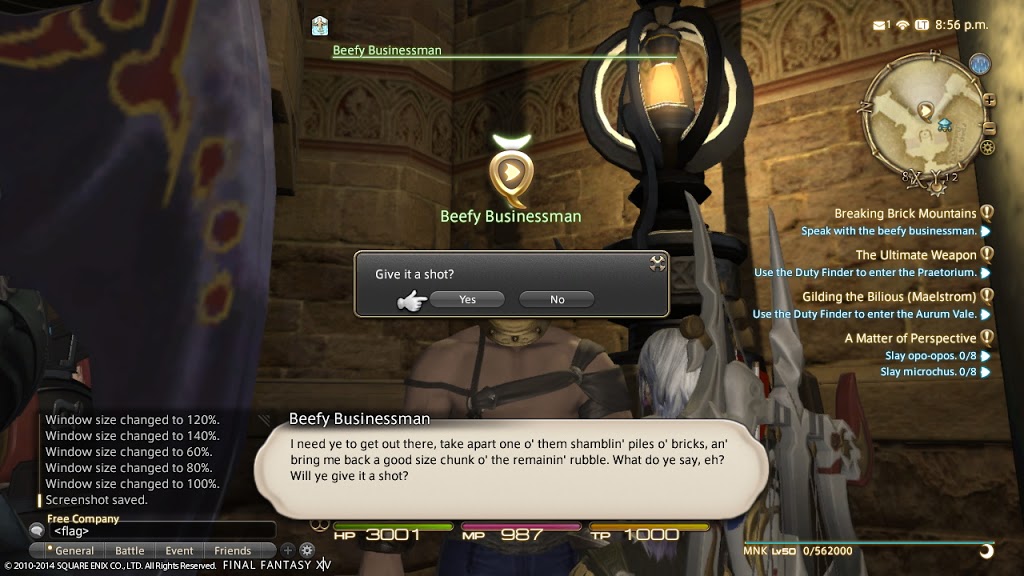 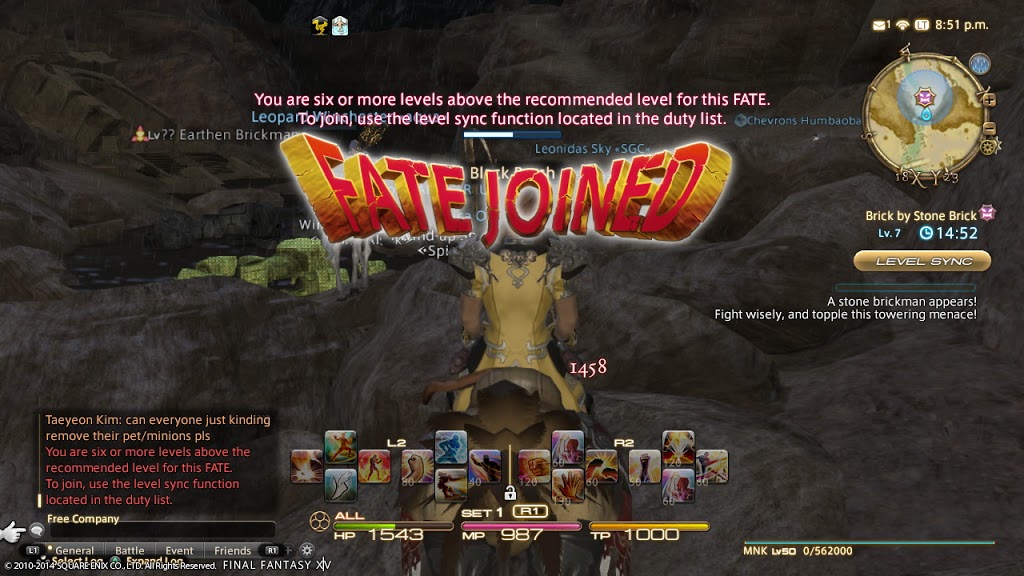 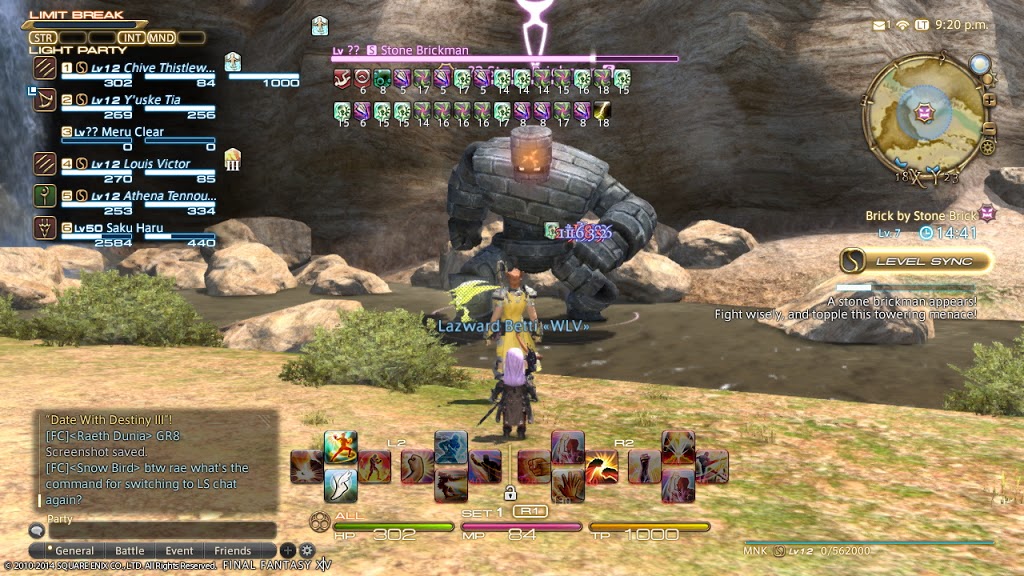 Like the Final Fantasy XI quest, the first FATE will feature a bunch of smaller enemies, and the second will be just one large enemy, a Stone Brickman. You can see I decided to party up for this one just in case I needed to get a gold medal for the FATE to get the quest item. 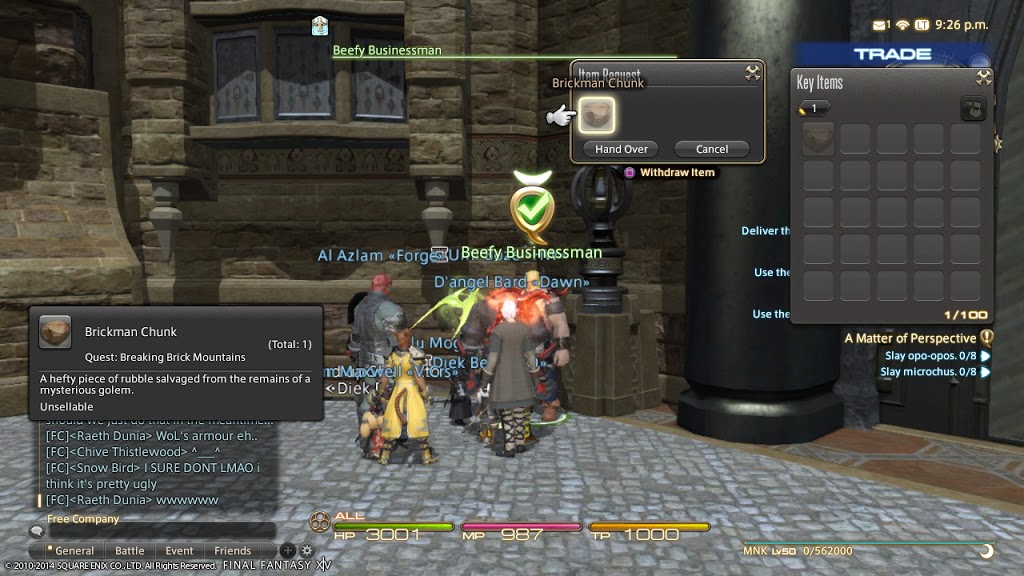 The item you’ll need is the Brickman Chunk, which you can turn in to the Beefy Businessman to complete the quest. Again, I’m not 100% sure, but I think you just need to participate in both FATEs to get the item. That, or it’s very easy to get gold!
Just like with the Final Fantasy XI quest line, I don’t want to spoil the cutscene that follows. This one, in particular, is a lot of fun! I’ll just leave you with these:
For some reason, Square Enix decided to give not one, but two items for completing this quest: a Thug’s Mug and a Wind-up Brickman. 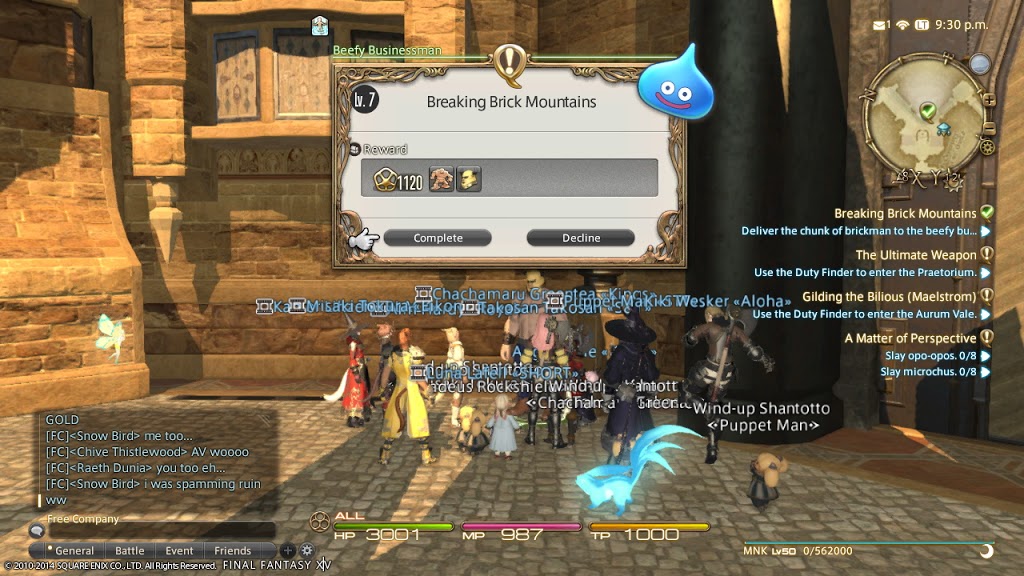 Here are a couple shots for posterity:
I was a little surprised by how bare-bones these quests were, especially after the complicated holiday quests. Then again, I thought the Heavensturn event was rather tedious, so I guess something more straightforward is a good change of pace. The cutscenes were very fun, and it’s always nice to get new minions, so even though I would have liked a little more than just a couple of FATEs, it’s definitely better than nothing! Overall, though, I have to say my favorite part of these tie-in quests are the event-specific quest and FATE fonts and the cute slimes they added to the quest window for the Dragon Quest X event. I’m such a nerd!