Since the big 2.1 patch just launched today for Final Fantasy XIV: A Realm Reborn, I figured now would be the best time to finally show off the Collector’s Edition of the game I snagged back in September. Anyone who follows me on Twitter probably remembers my slow descent into madness as I became hooked on the game during the open beta weekend and then proceeded to decide at the very last minute that I had to have a copy of the physical collector’s edition. Of course, they were sold out nearly everywhere, including Square Enix’s online store, but I managed to snag a preorder of the PC version from a European store. Let me tell you, it was well worth it! 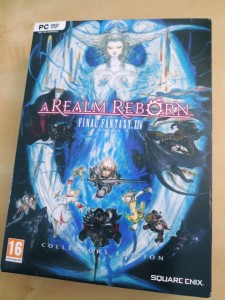 The whole package comes with a slip cover featuring art by none other than Final Fantasy veteran Yoshitaka Amano. The box itself has the same illustration but without any text covering it, which is a great touch if you’re a fan. I have to admit that I would’ve preferred a different illustration inside, such as the one featured on the Japanese box art, since Akihiko Yoshida did so many great pieces for the game, but there’s plenty of that in the art book that comes with the set. 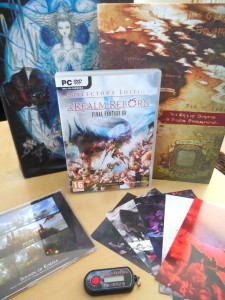 Here are the complete contents of the collector’s edition! The game comes with special box art unique to the set and also contains a blu-ray titled The Waning of the Sixth Sun. Admittedly, I only popped it in my PS3 to check it out for a few minutes the day it arrived and haven’t looked back since (I blame it on being too absorbed with the game), but it contains detailed history of Eorzea, including concept art and all the cutscenes from the original game, making it a great way to catch up on the story as it stands at the start of A Realm Reborn. If you’re interested in seeing the contents of the disc for yourself, someone has predictably uploaded it on YouTube.
The little device at the bottom of the picture is handy security token that can be linked to your account as an added measure against hackers. Since my account was frozen on two different occasions in the first couple weeks after the game went live due to “suspicious activity,” I’m definitely glad to have this! I’ve had no further problems since I’ve linked it to my account. 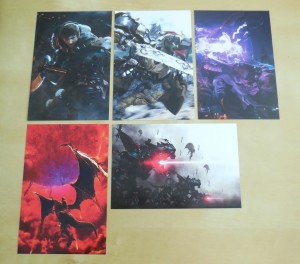 Here’s a better look at the art cards included with the set. I’ll readily admit that these are quite underwhelming – again, I would have much preferred some of Akihiko Yoshida’s gorgeous art to put on my wall. 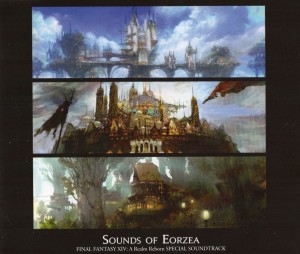 The CD that comes in the collector’s edition, titled Sounds of Eorzea: Final Fantasy XIV: A Realm Reborn Special Soundtrack, isn’t a full soundtrack, but rather a sample of six tunes from the main locations in the game, and the art on the cover reflects this. Still, it clocks in at just over 50 minutes and features some truly iconic themes from the game, so needless to say I utterly adore it. I was astonished to learn the composer, Masayoshi Soken, hasn’t done a full-scale Final Fantasy game before, though he’s been with Square Enix since 2001. I hope we see more of his work in the near future!

The real gem of the collector’s edition, though, is the art book: 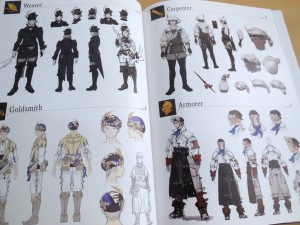 It’s a hefty hardcover book that more than accounts for the size of the collector’s edition box, and is filled with tons of amazing illustrations like the ones pictured above! Akihiko Yoshida, who also did Bravely Default, is one of my favorite artists right now, so this book was a real treat. I especially like the crafting gear pictured above. 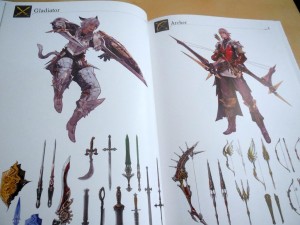 There are also pages featuring an illustration for each class and job, along with a few choice weapons. I just love the enthusiastic Mi’qote gladiator! 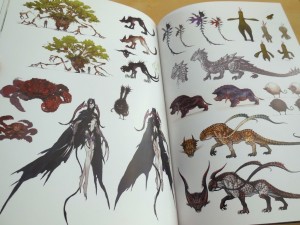 There are only a select few monster designs amidst the environment and scenery illustrations, but I’m glad they included what they did. I’ll go on the record for saying that I’m not totally sold on Final Fantasy XIV‘s version of Cactuars (top right), though. 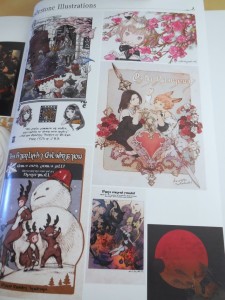 One of my favorite pages in the book is this selection of Lodestone illustrations. The Lodestone is the game’s official online hub where news and events are announced, so it goes without saying that it gets a few special seasonal illustrations to promote various in-game events. The Christmas one at the bottom right with the characters dressed as reindeers is too cute!

I have to say, I’ve been generally down on collector’s editions of games, as they tend to be a waste of money for me, but if more companies did collector’s editions like Square Enix has for Final Fantasy XIV: A Realm Reborn, then I’d be hooked! They’ve just announced there will be a separate collector’s edition for the PlayStation 4 version of the game, too… I may need an intervention!