First, I should qualify that statement with the fact that not only did I participate in the phase four beta weekend, but I also put in some time during the early access period before today’s official launch, so it’s not like I just started yesterday! Of course, that probably makes me sound even crazier, especially since when I mentioned Final Fantasy XIV: A Realm Reborn on the other day’s podcast, it had only just piqued my interest. Well, all I can say is that a lot has happened since then!

This isn’t my first time playing an online game – long-time readers will recall that I had a brief stint with Phantasy Star Online 2 last year, but Final Fantasy XIV is much more of a traditional MMO in that you’re with hundreds, if not thousands, of players at the same time. I won’t delve far into the gameplay and systems because frankly, I don’t really know much beyond what I’ve played so far (approximately 10 hours), but I’ve heard it’s similar structurally to World of Warcraft. 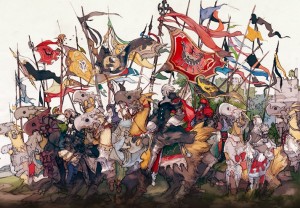 The first thing that drew me to FFXIV was its amazing art direction. In fact, I love the art so much that I immediately went and downloaded the PS3 theme as soon as I knew it was available. I hate to be superficial, but when a game’s art captures my heart, that can often be enough to make me want to give it a go. Since FFXIV had a free open beta weekend before the full launch, that’s exactly what I did! 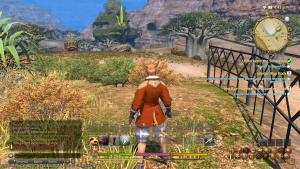 Especially fun for the open beta weekend was the fact that people could choose to try the game out on both the PC and PS3, as normally players have to purchase both versions separately. I gave both a go, and while the PS3 version was competent (and ultimately the one I went with for logistical reasons), I can see why most MMO gaming is done on the PC. Unfortunately my PC isn’t much of a powerhouse, so I couldn’t get any real high quality screenshots, but even on a low-quality system the game looks very nice, which can again be chalked up to the great art direction. All of the pictures in this post, by the way, were taking on said PC during the open beta weekend.

Of course, one of the most fun aspects of an MMO is creating your own character. As soon as I heard about the different races available in FFXIV, I knew I wanted to be a male Miqo’te. As you can see, the Miqo’te are blessed with some very neat cat-like characteristics, making them a popular choice for the catgirl-loving crowd in particular. My suave catboy is named Chive Thistlewood, continuing my trend of naming my characters after food. Here’s my full character card courtesy of Firestream.net:

For a starting class, I chose pugilist, which means Chive specializes in hand-to-hand combat. For a quick comparison, think Yuffie from Final Fantasy VII. From a gameplay perspective, I’m much more interested in getting in close and hacking away at enemies than I am at hanging back and dealing ranged damage or shooting fireballs, so it seemed like a good place to start. The great thing about Final Fantasy XIV, though, is that you can change your class at a drop of a hat by equipping a different weapon, so if I ever get tired of being a pugilist, a new class is just a click away! There are also a variety of non-combat classes such as fishing or mining, but I’ve decided that appearance is everything, so I’m working on leveling up my weaver class so I can outfit Chive in the best threads in town!

Suffice it to say, after playing just a few hours over the open beta weekend, I was hooked. I immediately went out and preordered the PS3 version in order to get an early access code (which meant I could start playing a few days before the official launch). Unfortunately, by the time I had committed myself to purchasing the game, the North American version of the amazing collector’s edition was all sold out, so I settled for the regular version… and then proceeded to scour the internet for stores selling the collector’s edition like the hopelessly obsessed woman I’ve become. Lo and behold, I managed to nab a European PAL copy, and should be coming in the mail in a few days! I’ll definitely do a post sharing that when it arrives.

Unfortunately, the game’s early access and official launch yesterday have been marred with issues that plague all MMO releases: login errors and overcrowded servers. I personally haven’t had many issues logging in until today, but I’ve been amazed to hear that some folks weren’t able to sign in at all during the early access, or that people literally can’t create characters on the servers they want because they’re full. Since none of this as been a major issue for me, it hasn’t significantly impacted my impressions of the game, but it’s worth noting for those reading this who are thinking of jumping on board. 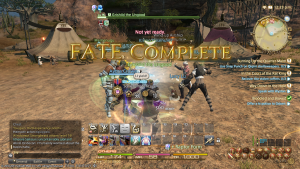 If you asked me a month ago, I would’ve never thought Final Fantasy XIV would be my cup of tea. Now, I practically eat, drink, and sleep FFXIV! Okay, that might be a bit of a stretch, but it’s safe to say that this is the first Final Fantasy that has grabbed me in a number of years. I hope Chive and I have many more months, and maybe even years, of adventuring ahead of us!