Come ’round, gather around the campfire. What I have for you today is a tale so terrifying, so bone-chilling, that you’ll lie awake at night for weeks wondering just how something so horrible could even come into existence…

Okay, I don’t think anything I’ll write on this blog will ever be that scary, but the free iPhone app I discovered this week comes pretty darn close. The name of that app is Alpaca Niisan, or “Alpaca Brother” (also known as Alpaka Evolution on Android devices).

Alpaca Niisan starts off innocuously enough – players are presented with a single alpaca leisurely meandering around a green pasture, a pleasant, upbeat tune adding to the strangely-endearing quality of the slightly-ugly alpaca. But before long, more alpacas start to appear, and it quickly becomes clear that there is only one aim to this “game” – knock other alpacas out by tapping on them so your alpaca can absorb them, gain experience, and evolve into increasingly horrific alpaca hybrids.

Pressing the star on the bottom right corner will show you what level your alpaca is and provide a brief description about its current form. Alpacas respawn even when the app isn’t open, so it’s important to keep checking it frequently in order to level up quickly.

Now, if you’re already following me on Twitter, you’ve probably noticed that this app is literally all I’ve been talking about for the past week (if I’ve subjected you to that and you’re still reading through this post, thanks for being such a trooper). The reason for that is that it’s both horrifying and horribly addictive! Not only that, but I’ve gotten my husband into it, as well, so whenever I forget to check on it he’ll enviably do some alpaca fusing for me. So what exactly makes this creepy-cute game so addictive? It’s hardly even a game – all you do is tap the screen! 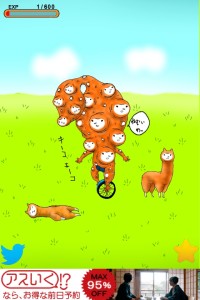 Well, I’m certainly not the only person who finds Alpaca Niisan amusing, as it’s quickly become one of the most popular apps in Japan (it’s good to know I’m not the only weirdo out there…). I think everyone who tries it quickly develops a morbid curiosity to see what will happen next – just what will the monstrous alpaca evolve into, and how will each form move around and interact with the other alpacas on screen?

Since half of the fun is discovering the crazy forms your alpaca evolves into for yourself, I’ll refrain from posting some of the later (and even more disturbing) evolutions. Alpaca Niisan is currently available for both iOS and Android devices worldwide. For some reason the title hasn’t been translated for the iOS version (nor the app itself, for that matter, but you definitely don’t need to understand Japanese to enjoy it), so find the game on an iOS device paste アルパカにいさん in the search bar of the app store or view it here online. Android uses will find the game under Alpaka Evolution on their device or the online Google Play store. Note: These instructions apply to the North American Google Play/app stores, so the name of the app may be different depending on your region