Animation Do, a subsidiary of Kyoto Animation, released a very interesting 30 second video (hereafter referred to by the Japanese abbreviation for commercial, “CM”) the other day focusing on four young male swimmers that has gained an astounding amount of popularity worldwide. While I wasn’t planning on writing a whole post about it, as I didn’t think there was any discussion to be had, the huge outcry for the CM to be turned into a full-fledged series as well as the backlash by some fans against Kyoto Animation producing animation for a female audience has proven that it’s definitely not “just a CM.” In addition, there’s so much misinformation regarding this “anime” floating around that I thought it would be a good idea to clear up exactly what it is and why it’s got everyone so excited/angry. 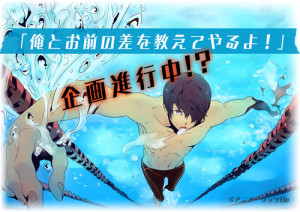 In April 2012, Animation Do released two teaser images for a new project, one which included the phrase “Ore to omae no sa o oshiete yaru yo!” or “”I’ll show you what makes us different!” (pictured above). Fans immediately assumed Kyoto Animation was finally doing a series aimed at a female audience, contrary to their massively-popular K-On and Lucky Star, which contain much male-oriented fanservice and moe elements (though they remain relatively popular with female viewers, as well). People on English forums began dubbing the series “the swimming anime,” but there wasn’t a single word on the production until March 6th, 2013, when Animation Do released a 30 second CM featuring the characters from the original teaser.

Kyoto Animation has been known to release CMs with completely original assets, so it’s safe to assume that the project they were teasing was in fact a promotional CM for the company and not actually a new series. Further supporting this is the fact that the CM credits are listed with their other commercials on the company’s website, indicating that it is not a promotional CM for a new series (note: the title of the CM can be translated to “swimming club,” indicating it might be more appropriate to refer to it as that instead of “the swimming anime”). Even so, many fans continue to speculate that a series may arise out of this CM, and there are has been a huge interest in the swimming anime, including both extremely positive and negative reactions, since its release nearly a week ago.

On one hand, there are many (likely female) fans who have fallen head-over-heels for characters they know next to nothing about, fantasizing potential plotlines and pairing them off with one another in homosexual relationships. I’d like to think the vast majority of the reaction to the CM has been positive, as we can see petitions to make the CM into a full series popping up on major websites such as Crunchyroll and fanart from Tumblr to Pixiv. There’s even a cosplay contest!

On the other hand, it’s recently come to my attention that there are a number of fans of Kyoto Animation that are not at all happy with the company targeting any form of media at a female audience. Actually, I can’t tell if these people are necessarily fans of Kyoto Animation, but there has definitely been a negative backlash from people saying it’s too obviously catering toward women, that it’s likely to be BL and is thus disgusting/should not exist (honestly, I’m surprised how many people have made anti-fujoshi comments…), or that Kyoto Animation is wasting their talent by drawing an all-male cast. They may be a minority, but they’re certainly a vocal one.

Finally, to top all this off, there have been rumblings over the past day or so that Kyoto Animation has seen how popular the video is and is considering making the CM into a full-fledged anime as a result, but I have not been able to find any sources that confirm/deny this.

Now, anyone who knows me probably already has a good idea how much I like the CM, but I have to say I’m honestly surprised at how many people are hoping/expecting this theoretical swimming anime to be BL. I will happily admit that I consider myself a fujoshi – not only am I doing a PhD on BL manga, but I love a good homosexual romance and am not beyond “slashing” male characters if the mood strikes. But, that definitely doesn’t mean that all the media I consume must be BL-related in some way. In fact, as I grow older, I’ve found I enjoy stories about ambiguous/queer sexualities more than straightforward BL, and would take a story with complex and interesting characters over a bland, cliché BL romance any day of the week. So, while I’m happy fans are interpreting the swimming anime as they like, I find it a little bizarre that everyone just assumes it will focus on homosexual romance, as if that’s the only way Kyoto Animation could possibly appeal to a female audience.

Indeed, many are awestruck by the fact that such a successful, well-known animation studio would dare to make a 30 second CM chock-full of female-oriented fanservice. I think anyone who watches the CM (and if you’re reading this post, I hope you have!) will agree that the animation is lovely, whether or not the content appeals to you personally, and in an industry that largely caters to men, I’m glad to see Kyoto Animation trying new styles and attempting to appeal to new demographics. The fact that the mere idea of a swimming anime full of attractive men is so popular shows that we still have a long way to go until anime aimed at audiences that aren’t stereotypical heterosexual men are on equal footing with the hundreds and thousands of series produced for and consumed by “mainstream” otaku. It would be wonderful if Kyoto Animation decided to make this into a series, but I won’t be getting my hopes up.

Update: The Daily Dot and The Mary Sue have both wrote very informative pieces that cover some things I haven’t, so you may want to check them out if you’d like to learn more. The Daily Dot provides particularly useful background on Kyoto Animation (both, however, put a particular spotlight on the Tumblr fandom). I’ve also changed my translation of “Ore to omae no sa oshiete yaru yo!” from “I’ll show you the difference between you and I!” to “I’ll show you what makes us different!” –– my initial translation was much too cumbersome.