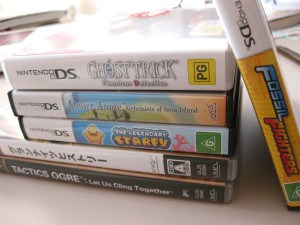 Ah yes, the dreaded backlog… we meet again. Something about the holiday season and my never-ending list of Games I Want to Play (followed closely by Games I Want to Own and Games I Wouldn’t Mind Owning) always gets me reminiscing on just how many games I actually own but still have yet to play. I always buy my games with the most honorable of intentions (to play them, of course), but somehow they end up getting lost in the always-growing stack of reviews and new games I also Want to Play.
I’m not going to count each and every game in my backlog because a) the result would undoubtedly be really depressing and b) I don’t think that would be all that productive. What would be productive, however, is to set a clear goal of what I’d like to play over the upcoming holiday. With that in mind, I surveyed my shelf and chose six games I bought/received over the past year that I feel drawn to play for one reason or another. The lucky titles are: Ghost Trick: Phantom Detective, Atelier Annie: Alchemists of Sera Island, The Legendary Starfy, Grand Knights History (JP), Tactics Ogre: Let Us Cling Together, and Fossil Fighters.
Now, it’s time to set a few goals. I’ve got nearly 3 weeks of vacation over the holiday break and two 20-hour flights to endure. I’m not sure what would be realistic, but I’d like to think I could play at least two games over that period. Since I need to be conscious of what I’m bringing with me from a space/weight standpoint, I’m going to rule out Grand Knights History and Tactics Ogre: Let Us Cling Together because of the UMD Factor, which of course would mean I’d need to bring my PSP along for the ride.
From the looks of things, it’s going to be a a very DS-centric trip! I’ll probably cross Atelier Annie off the list due to the RPG Factor, which means it would take considerably more time to beat than non-RPG titles.
So, that leaves me with three games: The Legendary Starfy, Ghost Trick: Phantom Detective, and Fossil Fighters. Where should I start? Is it reasonable to try and beat these three over the break, or should I whittle the list down to two? Do you have any games in your backlog you want to play through over the holidays? Let me know your thoughts in the comments!
Bonus: Fossil Fighters scores a place on this list solely for the Dinosaur Factor and the Awesome Character Designs Factor. Case in point: 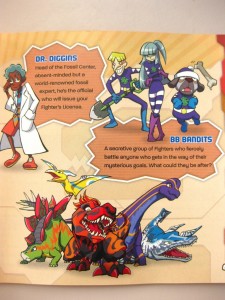