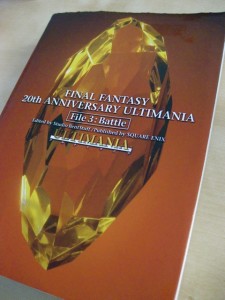 Every once in a while, Shaun and I stumble upon a really good find here in Brisbane. First it was the talking Pikachu and Rilakkuma plush keychain at the local vintage shop, then it was the Japanese Harvest Moon: Friends of Mineral Town strategy guide from the used bookstore in the city. Now, I dare say we’ve uncovered the crown jewel of awesome game-related discoveries: the Final Fantasy 20th Anniversary Ultimania File 3: Battle. Where did we find this rare tome, you ask? In the discount bin of our local comic book store for only $25! To get an idea of what a steal this is, $25 is pretty much on par with what you’d pay for this beast if you bought it from a bookstore in Japan… yet it was originally listed here at a whopping $70!

Now, the Final Fantasy Ultimania series is basically a bunch of glorified guide books for, you guessed it, the Final Fantasy games. They don’t generally contain step-by-step walkthroughs of the game, but instead act as a catalog for everything from weaponry to enemies, with in-depth character profiles and exclusive developer interviews containing all sorts of nuggets of information about the world of Final Fantasy.

The 20th Anniversary trilogy of books was released in 2008 (on that note, it’s kind of scary to think that Square Enix is celebrating Final Fantasy‘s 25th anniversary this year), each book focusing on a separate facet of the Final Fantasy world –– one for characters, one for battle-related information, and one for scenario, or the game’s story/world. As you can see, this particular volume is of the battle persuasion, meaning it catalogues everything pertaining to Final Fantasy battles from Final Fantasy I all the way up to Final Fantasy XII (including X-2!).

I have to say, I never thought I would be compelled to pick up a Final Fantasy Ultimania, but flipping through 20th Anniversary Ultimania File 3: Battle is a real joy. There’s everything from character stats and enemy information to summon lists and all sorts of neat comparison charts for all the different Final Fantasy games… I think anyone who’s a fan of a series will soon see what I mean!

Character profiles certainly aren’t as in-depth as they would be in the character volume, but the short descriptions featuring Amano or Nomura’s art, along with sprites and alternate versions, if available, is a nice touch. 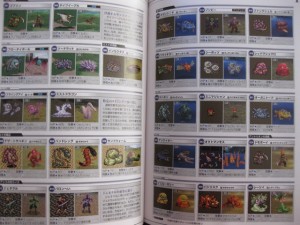 And, of course, there are pages and pages of enemies in each game’s bestiary! I love the comparison images from Final Fantasy IV. 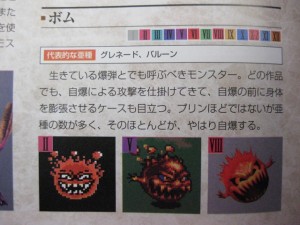 One of my favorite aspects of this book are the comparison charts –– here we are treated to three different Bomb designs, along with alternate names (Grenade, Balloon). Did you know that the only Final Fantasy that didn’t feature Bombs was Final Fantasy I? I didn’t! 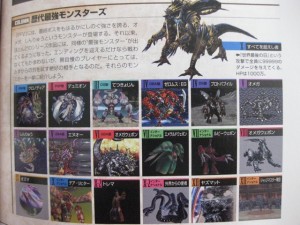 More monster comparisons! This time we’re treated to the wide range of deadly optional bosses from the games. Can you name them all? 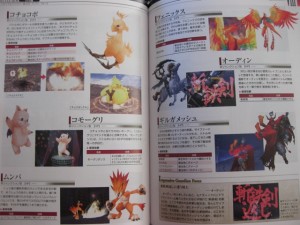 Summons! Another one of my favorite sections. These are all from Final Fantasy VII. I love that Moogles and Moombas even get their own summons. Final Fantasy definitely needs more Moombas. 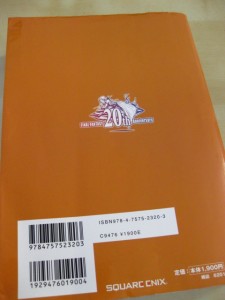 And there you have it! This may in fact be the best $25 Shaun and I have ever spent. Well, maybe not quite, but it’s still a very exciting purchase. I have a feeling we’ll be flipping through File 3: Battle for years to come.
If you have anything in particular you’d like to see from this book, feel free to let me know in the comments and I’ll do a second round up of pictures for my next post!